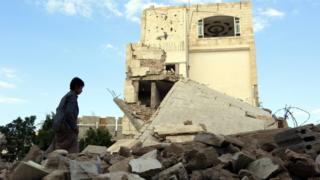 US Secretary of State Mike Pompeo has defended the administration’s backing of Saudi Arabia in the war in Yemen, saying withdrawing support would undermine efforts to reach a ceasefire.

He told US Senate members that their planned vote on such a move was “poorly timed” and would help Yemeni rebels.

Senators could vote on a bipartisan resolution to end US military support for the Saudi-led coalition this week.

The three-year war has caused a massive humanitarian crisis.

The conflict between Saudi-led military coalition and Houthi rebels has killed thousands of people and pushed millions more Yemenis to the brink of starvation.

The US provides intelligence support to the coalition and sells weapons used by the Saudis in Yemen.

What did Mike Pompeo say?

After Wednesday’s closed-door briefing with senators in Washington, the secretary of state said the US was “on a cusp” of gathering the warring parties for talks “to hopefully achieve a ceasefire”.

A vote, he said, would “encourage the Houthis” and their Iranian allies.

According to prepared remarks issued ahead of the briefing, Mr Pompeo said: “The suffering in Yemen grieves me, but if the United States of America was not involved in Yemen, it would be a hell of a lot worse.”

Mr Pompeo also addressed criticism of the administration’s stance on the murder of journalist Jamal Khashoggi.

“There is no direct reporting connecting the Saudi crown prince to the order to murder Jamal Khashoggi,” Mr Pompeo said.

President Donald Trump has dismissed a reported CIA assessment that Saudi Crown Prince Mohammed bin Salman was to blame for his killing in Istanbul in October.

Last week Mr Trump described Saudi Arabia as a “steadfast partner” that had agreed to invest “a record amount of money” in the US.

How did senators react?

A number came out saying the arguments they had heard had not been convincing.

Some were particularly angry that their request to hear directly from CIA chief Gina Haspel – who has heard audio of the Khashoggi murder provided by Turkey – had been turned down by the administration.

The BBC’s Barbara Plett Usher in Washington says opposition to the war in Yemen has gained momentum because of outrage at the administration’s response to the killing and many in Congress want a tougher stance from the White House.

Democratic Senator Bob Menendez said the Senate had been “stonewalled from hearing from the CIA director”.

“I have respects for the secretaries of state and defence but I don’t need them to characterise the information of the CIA and intelligence community, I need to hear it directly,” he added. “It’s time to send Saudi Arabia a message, both on its violation of human rights and the incredible humanitarian catastrophe it’s creating in Yemen.”

Republican Senator Bob Corker, who chairs the Senate Foreign Relations Committee, said it was apparent to everyone in the room that the crown prince was responsible for Khashoggi’s death.

“We have a problem here. We understand that Saudi Arabia is an ally, of sorts, and a semi-important country. We also have a crown prince that’s out of control,” he said.

What have the Yemeni sides recently agreed?

Houthi leaders have said they are ready to move towards a ceasefire if “the Saudi-led coalition wants peace”.

The coalition has recently ordered a halt in a fierce offensive on Hudaydah, a port on the Red Sea. They have also said that they support the UN-led talks.

The UN special envoy to Yemen, Martin Griffiths, has said he hopes peace talks convene before the end of the year.

The Houthis failed to show up at peace talks in September.

What is behind the conflict?

The conflict began in 2014 when the Houthi Shia Muslim rebel movement took advantage of the new president’s weakness and seized control of northern Saada province and neighbouring areas.

The conflict escalated dramatically in March 2015, when Saudi Arabia and eight other mostly Sunni Muslim Arab states – backed by the US, UK, and France – began air strikes against the Houthis, with the declared aim of restoring Mr Hadi’s government.