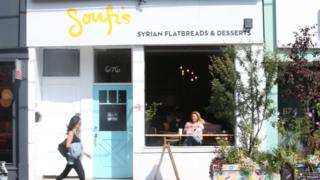 A Syrian restaurant in Toronto has shut after death threats triggered by the owner’s son taking part in a protest against a right-wing party.

The al-Soufi family, which opened the restaurant in 2017, said they were overwhelmed by the “magnitude of hate”.

Their son was part of a group of masked protesters who blocked an old lady from a People’s Party of Canada rally.

The restaurant was profiled in the New York Times and lauded as an example of how Canada has embraced its refugees.

The son, Alaa al-Soufi, was filmed at a protest outside a campaign rally for People’s Party of Canada leader Maxime Bernier on 29 September.

Mr Bernier wants to reduce immigration to Canada and has criticised Canada’s embrace of “extreme multiculturalism”.

At the rally, a line of protesters wearing masks blocked an old woman using a walker from entering.

“If I moved, they moved and they would not allow me through,” Dorothy Marston told CBC News.

“They were hollering ‘Nazi’ and ‘racist’ and all this nonsense.”

Mr al-Soufi was later identified as one of the masked protesters.

The family initially responded by posting an apology on their Facebook page.

“We would like to formally apologise for the unfortunate incident that occurred with the elderly woman,” said the statement.

“Alaa regrets that he did not step aside and/or stand up against the act of verbal abuse.”

The statement said he did not verbally or physically assault her.

Since then, the family says it has been inundated with hateful messages and threats against them and the restaurant’s staff, which is why it decided to permanently close its doors on Tuesday.

“We are heartbroken about having to make this decision; however, we could not put our family members, staff, and patrons in danger,” they said in a statement to media.

“The magnitude of hate we are facing is overwhelming.”

The family also released a selection of the hate messages they received online, including one that read: “Keep it up and your family, and those who defend your family’s terrorist actions will suffer immensely.”

Toronto police say a report was filed on Wednesday, and they are investigating the messages.

Both Liberal leader Justin Trudeau and Conservative leader Andrew Scheer condemned the hate directed at the al-Soufis on Tuesday evening.

On Wednesday, Mr Bernier tweeted that he condemns “BOTH the hate and threats directed at this family because of the actions of their son, AND the hate and verbal assault from Antifa thugs directed at an 81-year-old woman”.

Unlike @JustinTrudeau and @AndrewScheer, I condemn BOTH the hate and threats directed at this family because of the actions of their son, AND the hate and verbal assault from Antifa thugs directed at an 81-year-old woman at our Hamilton event last week. pic.twitter.com/He7PwM6M9W

According to the New York Times profile in 2018, the family moved to Canada in 2012, after living in Saudi Arabia for about 20 years, when their daughter decided to attend the University of Toronto.

The family said they opened the restaurant in 2017 to show that “Syrians are not just victims” and employed many young Syrian refugees who had been resettled in the city.