Thousands of people protested across the country on Thursday in support of the inquiry led by Robert S. Mueller III, the special counsel investigating Russian interference in the 2016 election, just one day after President Trump shook up the agency overseeing it.

The demonstrations, seen in the video above, took place in New York, Washington, Boston, Philadelphia, Omaha, Salt Lake City and elsewhere. They came after the president’s firing of former Attorney General Jeff Sessions, who had recused himself from the investigation, much to Mr. Trump’s frustration. The acting attorney general, Matthew G. Whitaker, is a Trump loyalist and an outspoken critic of the investigation.

“This is a man who should have recused himself,” said Gerald Harris, a retired judge who participated in the protest in New York. “It’s simply a sham that he’s going to become the attorney general in charge of this probe.” 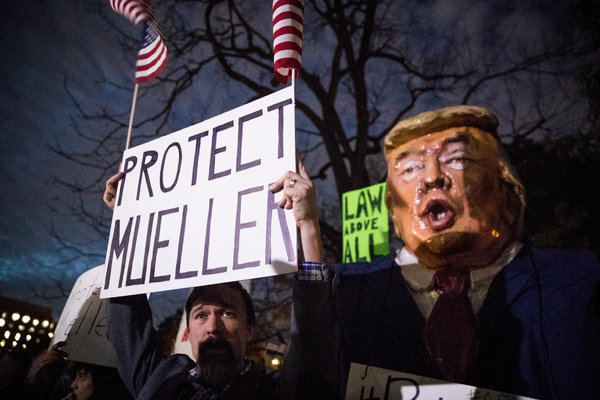 In New York, according to the police, about 4,000 people marched from Times Square to Union Square, holding signs and chanting. As they did, #ProtectMueller trended on Twitter.

Many of those who participated held signs that said “No one is above the law” and “Protect the Mueller investigation.” Outside of the White House, a group of protesters held illuminated signs that spelled out “Save Mueller.”

“This is a constitutional crisis, but it’s also an ethics issue,” Walter Shaub, the former director of the Office of Government Ethics, told the crowd.

The protests were organized online at TrumpIsNotAboveTheLaw.org, a website by MoveOn, which said that more than 500 protests took place.