Politicians and celebrities are paying tribute to the late Supreme Court justice, who died from cancer Friday aged 87. 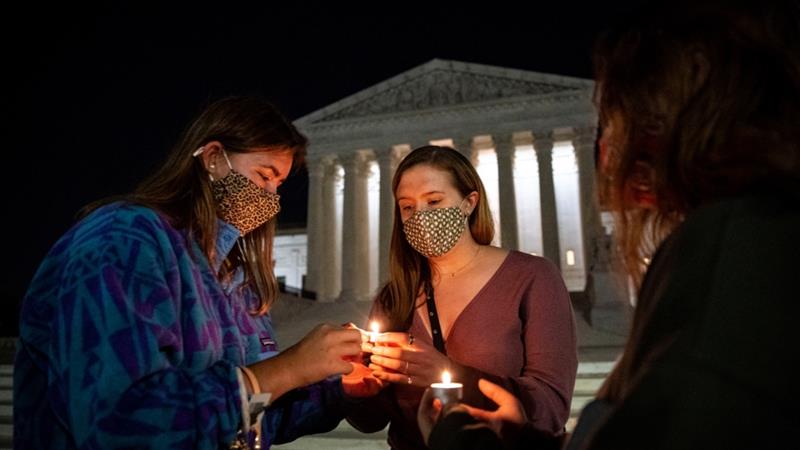 Donald Trump said Ginsburg, who died at age 87 of complications from metastatic pancreas cancer, “was an amazing woman” who “led an amazing life.”

The US president’s remarks came shortly after a rally in Minnesota where he said one reason the upcoming presidential election is so important is because of possible Supreme Court vacancies.

Democratic presidential candidate Joe Biden, also following a campaign stop in Minnesota, called Ginsburg “a beloved figure” and said, “My heart goes out to all those who cared for her and care about her. And she practiced the highest American ideals as a justice, equality and justice under the law, and Ruth Bader Ginsburg stood for all of us.”

In a statement announcing her death, Supreme Court Chief Justice John Roberts said the US had lost “a jurist of historic stature”.

“We at the Supreme Court have lost a cherished colleague. Today we mourn but with confidence that future generations will remember Ruth Bader Ginsburg as we knew her – a tireless and resolute champion of justice,” he said.

Former President George W Bush said Ginsburg was an inspiration to “more than one generation of women and girls” while former President Jimmy Carter called her “a beacon of justice”:

In a tweet, Hillary Clinton thanked Ginsburg, who was appointed to the US Supreme Court by her husband President Bill Clinton in 1993, for paving the way for women – including herself.

“There will never be another like her,” Clinton wrote:

Ginsburg died on Friday at age 87 from complications related to cancer, the US Supreme Court said in a statement.

She was only the second woman ever appointed to the nation’s top court when she took her seat 27 years ago.

House Speaker Nancy Pelosi announced that flags are flying half-staff over the US Capitol in honour of Ginsburg:

Democrats will argue vociferously against Trump nominating someone to fill her seat so close to the election on November 3.

However, knowing the golden opportunity they have to replace a reliably liberal justice such as Ginsburg with a conservative justice, Trump and his Republican Party will likely move full steam ahead.

Senate Minority Leader Chuck Schumer agreed, saying that Ginsburg’s seat “should not be filled until we have a new president”:

US Senator Lindsey Graham, who as chairman of the Senate Judiciary Committee will oversee the nomination hearing of Ginsburg’s successor if a nominee is put forth before January, left the upcoming political battle out of his tribute:

At the beginning of her tenure on the Supreme Court, Ginsburg was considered left of centre; over the years, she developed into a reliably liberal firebrand, lionised by progressives.

World leaders offered up tributes as well, including Canadian Prime Minister Justin Trudeau, who said her “impact will undoubtedly be felt for generations”:

As only the second woman appointed to the Supreme Court (Sandra Day O’Connor was the first), Ginsburg was an icon to liberal women.