‘She Died Working for Us’: Sons of Atlanta Victim Struggle to Move Forward

DULUTH, Ga. — It was already 1 p.m. when Randy Park tumbled out of bed one miserable March day. It had been another long night of TV and video games to distract himself from the emptiness swirling through the townhouse where his mother had once cooked meals between her shifts at a spa. He padded down the hallway, past her vacant bedroom, and nudged his younger brother, Eric, awake.

It was past time to face another day on their own.

In the immediate aftermath of the deadly shootings in the Atlanta area, the faces of Randy and Eric Park, now 22 and 21, seemed to be everywhere, their winsome images linked to a GoFundMe page established after their mother, Hyun Jung Grant, was killed. They were overwhelmed by financial donations, care packages, reporters at their door, and so many calls that Eric’s cellphone froze.

But in the months since, on the cusp of adulthood, the Park brothers have been largely left to navigate the world by themselves.

Sorrow takes many shapes after a mass shooting. Those left behind in the Atlanta area include Mario Gonzalez, whose new wife, Delaina Ashley Yaun, was a customer at Young’s Asian Massage. They include the grandchildren of Suncha Kim, who immigrated from South Korea in 1980. And they include Randy and Eric Park, whose anguish is compounded by the knowledge that their single mother was killed doing a job she disliked, part of her life that they knew little about and that kept her away from home for many hours.

“She died working for us,” Randy said. “It’s just unfair. She already didn’t have much of a life to begin with.” 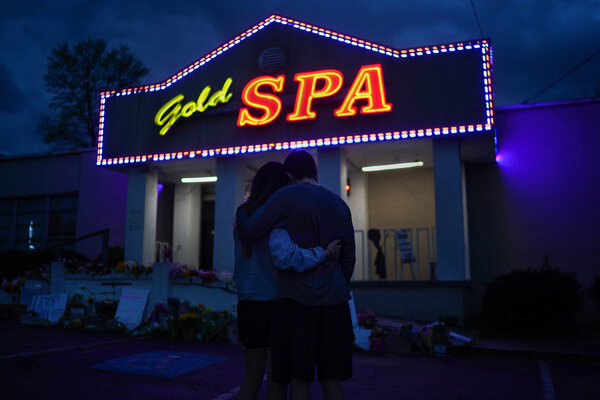 The path forward for Ms. Grant’s sons is now murky, the questions before them both mundane and profound. Will they return to college or to work? What will they do with the money — nearly $3 million in all — that poured in to support them? What will they make of the rest of their lives?

The Park brothers live in a Korean enclave in suburban Atlanta. Until recently, Randy worked full-time at a nearby bakery and cafe. Eric was struggling in remote courses at Georgia Gwinnett College. The pandemic and their mother’s death put an end, at least temporarily, to those pursuits.

Growing up, the brothers believed they knew how to get by on their own because their mother was often at work. But the past few weeks have revealed all the ways in which Ms. Grant parented from afar: cleaning the house between shifts, cooking large meals that could last for days and calling every night from work to check in.

A Rise in Anti-Asian Attacks

A torrent of hate and violence against people of Asian descent around the United States began last spring, in the early days of the coronavirus pandemic.