‘Sharpening the Knives’: Musicians Join the Protests in Puerto Rico

Among the tens of thousands who flocked to the streets of Puerto Rico this week to call for the resignation of the island’s governor, Ricardo A. Rosselló, there was a new kind of activist: well-known musicians ready to use the clout of their enormous social media followings to energize the brewing discontent.

The pop superstar Ricky Martin, the rapper Residente, his sister iLe, and the Latin trap artist Bad Bunny combined their efforts in support of a social movement like no other Puerto Rico has ever seen. Bad Bunny, whose legal name is Benito Antonio Martínez Ocasio, even cut off a tour to fly to San Juan. They joined the singers La India and Danny Rivera and the actor Benicio Del Toro, who were present at a protest Wednesday night that filled the streets from the Capitol to the governor’s mansion a mile away.

Mr. Martin announced his participation in a video on Twitter that he shared with his 20 million followers.

“Frustrated. Angry. I feel this horrible pressure in my chest,” he said. “How do I free myself of this anguish? Simply traveling to Puerto Rico.”

[Here are answers to some basic questions about the unrest in Puerto Rico and its roots.]

Residente, iLe and Bad Bunny produced a protest song — written and recorded in one day — called “Afilando los Cuchillos” (Sharpening the Knives) that had 2.5 million views on YouTube within a day of its release.

The playwright Lin-Manuel Miranda joined the protest in New York.

Experts say the involvement of artists from so many different genres of music, from pop to reggaeton to Latin trap, could draw a range of young people who are usually turned off by traditional party politics. And it likely tightened the pressure on the governor, who is increasingly isolated with few public supporters. 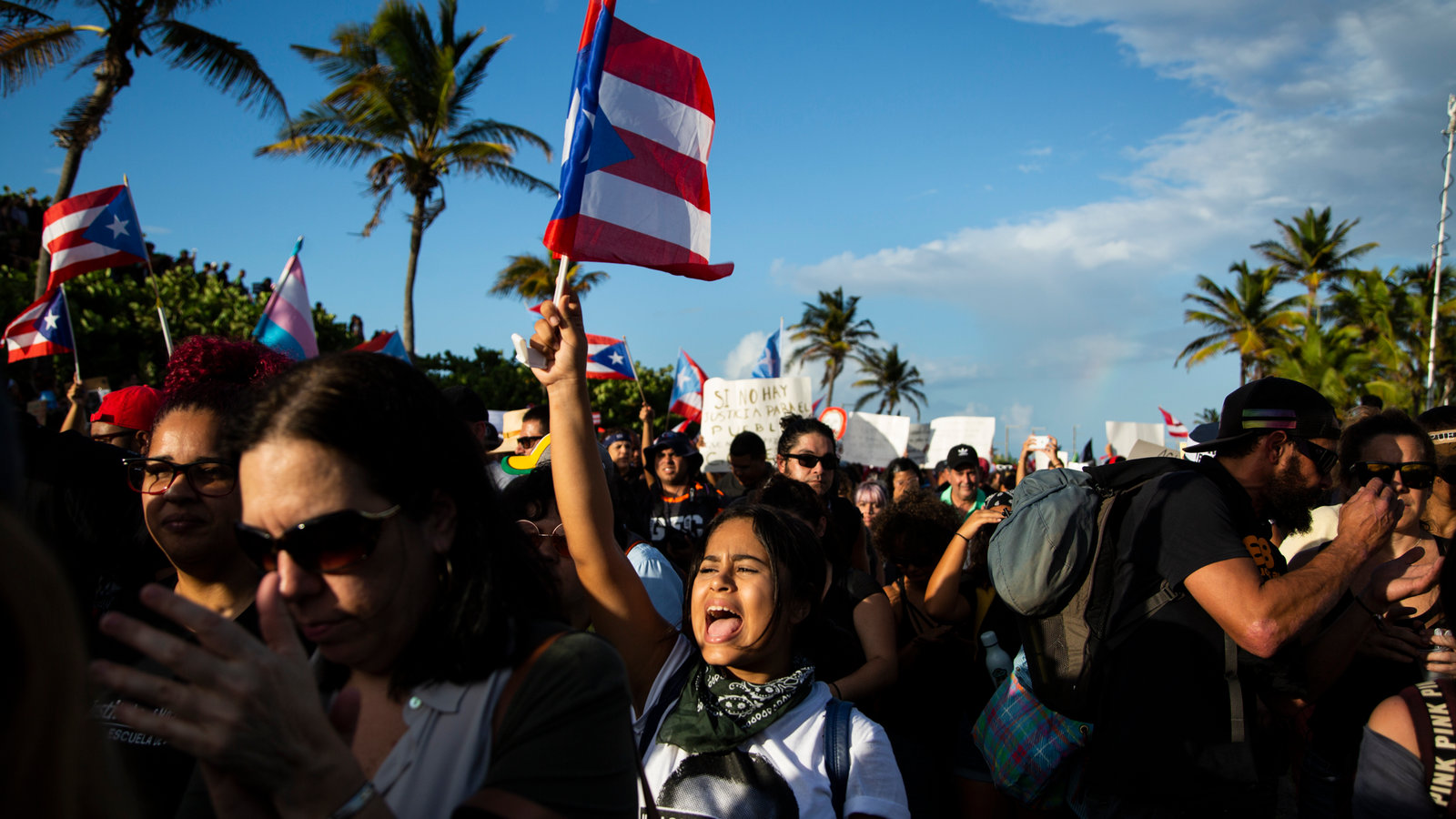 “This is really important, not just because we or the other artists arrived, but because this is historic,” René Pérez Joglar, who uses the stage name Residente, said in an interview. “When we unite, this becomes an international story,” he said. “But understand that people are there because they are upset, not because they want to see artists.”

Mr. Rosselló is under pressure to leave office after the release of nearly 900 pages of chat messages among him and his inner circle, including the island’s chief financial officer and secretary of state, in which the governor called a former New York City Council speaker a whore and joked about shooting San Juan’s mayor, Carmen Yulín Cruz. The chat scandal came on the heels of corruption arrests of two top former officials in his administration.

The chat was the breaking point for an island of more than three million people that had already endured a devastating hurricane, job losses and, in some areas, no electricity for nearly a year.

“People still don’t have roofs on their houses,” Mr. Pérez said. “I think there are a lot of things happening at the same time. There is a new generation of young people that has a different mind-set. This generation is very aware. That is fundamental.”

Mr. Pérez’s presence at the protest is hardly a surprise: He has always been vocal about his desire to see Puerto Rico become an independent nation. But for Puerto Ricans to see Mr. Martin and Bad Bunny protesting was a game-changer for the island, said Yarimar Bonilla, a political anthropologist at Hunter College.

“Ricky Martin is not known for political stances. He’s a Buddhist; he is peaceful. For him to get involved, that is important and says something,” she said. “Bad Bunny’s presence was so important: He has a rising political influence and has a much younger depoliticized following.”

Mr. Martin’s homosexuality was mocked in one of the posts by another official in the governor’s chat group. “Nothing says patriarchal oppression like Ricky Martin,” it said, going on to describe him using crude language as a “male chauvinist” for whom “women don’t measure up. Pure patriarchy.”

Listen to ‘The Daily’: The Political Crisis in Puerto Rico

Young people who may not have been raised on politics now have an entry into the protest movement, Ms. Bonilla said, noting that people were using lyrics from recent popular songs and turning them into protest slogans. A song about dumping a girlfriend became a chant about canning the governor.

Ms. Bonilla, who attended the protest, said she was struck by the fact that the musicians were not performing, but standing on a platform waving flags.

“It wasn’t a concert,” said Ileana Mercedes Cabra Joglar, Mr. Pérez’s sister, who uses the name iLe when performing. (She did sing a revolutionary hymn.)

It offers a sharp-edged rebuke to Mr. Rosselló, accusing him of inheriting a legacy from his father, a former Puerto Rico governor whose administration was wracked by corruption, and it delivers a jab to the first lady, Beatriz Rosselló, noting a gaffe she once made that suggested a lack of knowledge of Spanish-language literature.

“Normally the same people go to protests all the time,” Ms. Cabra said. “This transcended everything. This feels like a big family.”

Bianca Passalacqua, 21, a recent graduate of the University of Puerto Rico, said the singers were a draw — but to different key audiences.

“I believe it’s important that they come, because of the convening power they have,” Ms. Passalacqua said. “The fact that they come does make more people want to participate. For example, Bad Bunny attracts more millennials, while Ricky Martin attracts the elderly.”

“In my case,” she added, “I would have participated anyway.”