WASHINGTON — On a Saturday evening in February 2016, just hours after Justice Antonin Scalia died during a hunting trip, Senator Mitch McConnell of Kentucky, the Republican majority leader, interrupted a Caribbean vacation to draw a line in the sand.

“The American people should have a voice in the selection of their next Supreme Court justice,” he said. “Therefore, this vacancy should not be filled until we have a new president.”

At that very moment, Mr. McConnell changed the course of the court and every future confirmation battle to come. By the time President Barack Obama nominated Judge Merrick B. Garland — a mild-mannered jurist with impeccable credentials, a moderate record and fans across the ideological spectrum — the Washington apparatus that gears up around Supreme Court nominations no longer felt quite the same.

What followed is already setting the tone for an even more brutal battle over who should succeed Justice Ruth Bader Ginsburg, who died Friday at 87.

Democrats knew going into the battle over Judge Garland that the fight would not only be about the justice and his record, but about the very process of “advice and consent” laid out for senators in the Constitution. Republicans split on whether they should even take the customary introductory meetings with the nominee; Mr. McConnell refused to do so, though two endangered Republicans, Mark Kirk of Illinois and Kelly Ayotte of New Hampshire, said they would. (Both later lost their bids for re-election.)

“I simply ask Republicans in the Senate to give him a fair hearing, and then an up-or-down vote,” Mr. Obama said then. “If you don’t, then it will not only be an abdication of the Senate’s constitutional duty, it will indicate a process for nominating and confirming judges that is beyond repair.”

Republicans refused even to grant Judge Garland a hearing, spurning Mr. Obama’s request and infuriating Democrats and especially the progressive left, which is now demanding far-reaching measures — including expanding the size of the Supreme Court and adding Puerto Rico and Washington, D.C., as states — should Democrats retake control of the Senate in the November elections.

“The ghost of Merrick Garland hangs very heavily over the Senate right now,” said Jim Manley, a former aide to Harry Reid, the Democratic leader of the Senate during the Garland confirmation fight. “Everything that Democrats do they are going to base in part on Senator McConnell’s clear abuse of the process when they denied that man a hearing before the Senate Judiciary Committee.” 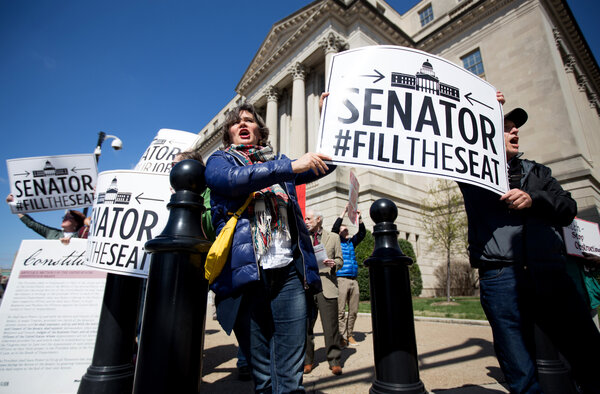 Mr. McConnell’s move was “the opening act,” said Nan Aron, the president of the liberal advocacy group Alliance for Justice, in his bid to stock the federal judiciary with conservatives. After Mr. Trump nominated Judge Neil M. Gorsuch to fill the Scalia vacancy, Mr. McConnell jammed through a rule change allowing Supreme Court nominees to be confirmed with a simple majority, instead of 60. (Democrats had previously done the same for lower court nominees.)

That change — known in Senate parlance as “the nuclear option” — eased the path for the confirmation of both Justice Gorsuch, 419 days after Justice Scalia died, and Justice Brett M. Kavanaugh last year. And it now leaves Democrats with scant ammunition to fight a Trump nominee to fill the Ginsburg seat. With Republicans holding a 53-to-47 Senate majority, four of them would have to defect in order to block confirmation.

Democrats, including Mr. Obama, now say Mr. McConnell must adhere to the principle he invented, that the Senate should not fill an open seat in an election year before a new president is sworn in. But Mr. McConnell is determined to secure a conservative majority on the court regardless of his own treatment of Judge Garland and has dug in.

In selecting Judge Garland, then 63, Mr. Obama took a calculated risk. The judge was a well-known figure in Washington legal circles, a Harvard-educated lawyer who earlier in his career had left corporate law and taken a 50 percent pay cut to become a federal prosecutor. He had made a name for himself prosecuting and winning the conviction of Timothy McVeigh, who had bombed the federal building in Oklahoma City in 1995.

As the chief judge of the United States Court of Appeals for the District of Columbia Circuit — sometimes called “the little Supreme Court” — Judge Garland had drawn praise from members of both parties. But he was older, white and moderate, and his nomination did little to energize the more liberal flank of the Democratic base.

Judge Garland had twice made it onto Mr. Obama’s short list, but the president chose Justices Sonia Sotomayor and Elena Kagan instead. He would keep Judge Garland in reserve as a sort of “break glass in case of emergency” candidate.

But by the time the emergency arose, with the death of Justice Scalia on Feb. 13, 2016, the political landscape had shifted. It would be three months before Donald J. Trump secured the Republican nomination for president, but he seemed well on his way.

Shortly after Mr. Obama announced Judge Garland’s nomination, Mr. McConnell appeared on the Senate floor to say it was dead on arrival. He later called the judge to tell him much the same thing.

“The American people may well elect a president who decides to nominate Judge Garland for Senate consideration,” Mr. McConnell said on the Senate floor. “The next president may also nominate someone very different. Either way, our view is this: Give the people a voice in the filling of this vacancy.”

Mr. McConnell himself was taking a gamble. Had Hillary Clinton, who was then running to succeed Mr. Obama, won the presidency — as many Democrats and Mr. Trump himself expected — she would have been unlikely to choose a nominee like Judge Garland, whose judicial record, particularly on cases involving national security and campaign finance, was not always pleasing to liberals.

Judge Garland visited the senators who would see him, mostly Democrats, and he completed the detailed questionnaire that nominees provide to the Judiciary Committee before confirmation hearings. But the waiting was agonizing for him, and over time, it became clear that his nomination was not going anywhere.

“He’s a wonderful person who was put in a horrible position,” his good friend the Washington lawyer Jamie Gorelick would later say.

At the time, Mrs. Clinton made no commitment to renominate Judge Garland were she to win the presidency. But the judge did receive the endorsement of Justice Ginsburg.

“I think he is about as well qualified as any nominee to this court,” she said in an interview in her chambers in July 2016. “Super bright and very nice, very easy to deal with. And super prepared. He would be a great colleague.”

For Judge Garland, a grandson of Jewish immigrants who once wanted to be a doctor before settling on the law, the loss of a chance to sit on the Supreme Court was personal and painful, though he took care not to show it. His career was in many ways an extended preparation for it. He had cried when Mr. Obama announced his name to fill the vacancy created by the death of Justice Scalia.

“The manifest unfairness of what happened is, I am sure, as clear to him as anyone else,” Ms. Gorelick said in an interview in February 2017, shortly after Mr. Trump became president. “But he doesn’t dwell on it. He doesn’t talk about it. He appreciates reality for what it is. He knows that his nomination was put in a terrible political limbo, but he is philosophical about it.”

The court is now shorthanded again, as it was in 2016. Back then, the eight-member court deadlocked only four times, and the justices worked hard to find consensus, sometimes at the cost of extremely narrow decisions. At the time, the court was evenly split between its liberal and conservative wings.

The court faces a new kind of divide after Justice Ginsburg’s death, with its Republican appointees outnumbering its Democratic ones 5 to 3. That may leave less room for compromise. As always, there are hugely consequential cases on the docket: A week after the November elections, the court is set to hear oral arguments in a case, backed by the Trump administration, to overturn the Affordable Care Act.

While the odds appear stacked against Democrats, Ms. Aron said in an interview on Saturday that her group would “fight to win this one,” and would remind voters at every turn that “Republicans played politics with the court.”

So far, two Republican senators — Lisa Murkowski of Alaska and Susan Collins of Maine — have said they would not vote to confirm a nominee before the election. Mr. Trump pressed Senate Republicans on Saturday to confirm his choice to replace Justice Ginsburg “without delay.”

Late on Friday, not long after Justice Ginsburg died, Mr. McConnell moved to stave off further defections by sending a letter to Republican senators urging them to “keep your powder dry.” People in Washington, and especially Democrats, remember well how satisfied Mr. McConnell was with his decision to keep Justice Scalia’s seat vacant until after Mr. Trump moved into the White House.

“One of my proudest moments,” the majority leader said in a speech in 2016, “was when I looked Barack Obama in the eye and I said, ‘Mr. President, you will not fill the Supreme Court vacancy.’”