A bombshell sexual misconduct accusation against Scott M. Stringer pushed two major questions to the forefront of New York City’s mayoral race: Could the claim be corroborated, and how would Mr. Stringer’s campaign be affected by the allegation?

The answer to the first question is not yet clear; Mr. Stringer, the city comptroller, continues to vehemently deny the account of a woman who came forward on Wednesday to accuse him of sexually assaulting her when she worked on his 2001 race for public advocate. But by Thursday, the political warning signs for his meticulously planned campaign were beginning to come into focus.

All three of the leading female mayoral candidates — including Maya D. Wiley, perhaps his most powerful rival for progressive voters — have now called on him to drop out of the race. State Senators Jessica Ramos and Jabari Brisport, two prominent left-wing lawmakers, have rescinded their endorsements of Mr. Stringer.

His campaign confirmed that a birthday fund-raiser scheduled for Thursday evening, headlined by some of the state’s most high-profile progressive Democratic officials, would not go forward.

Mr. Stringer’s campaign faces a moment of crisis, just as he had appeared to catch momentum — and some on the left fear that the fallout will help more moderate candidates like Andrew Yang or Eric Adams, the Brooklyn borough president, win the primary.

“Every time there are allegations like this, they need to be taken really seriously,” said Cea Weaver, a strategist for the Housing Justice for All Coalition. “It’s not good. I don’t know what’s going to happen, and I’m really concerned that absent Stringer’s campaign, the left doesn’t have a viable candidate.”

At issue is an allegation from Jean Kim, now a political lobbyist, that Mr. Stringer groped her, made other unwanted sexual overtures and told her to keep those actions quiet during his 2001 race. Mr. Stringer has strongly denied those claims, saying that they had a consensual relationship that stretched over a few months.

The claim injected a new measure of unpredictability into the race and gave a number of his opponents fresh arguments for their own candidacies.

“We cannot afford a distraction” from the most consequential issues facing New York City, said Ms. Wiley, who picked up endorsements on Thursday from the women’s rights activist Gloria Steinem and Roberta Kaplan, a civil rights lawyer.

“Anyone who wants to sit and serve the people of the city of New York should be able to understand that there is simply no man who can tell a woman whether or not she has consented to a sexual relationship,” Ms. Wiley said. “That’s not how it works.”

For months, Mr. Yang, the former presidential candidate, has topped the sparse public polling, typically followed by Mr. Adams. But in a number of recent polls, Mr. Stringer had appeared to be virtually tied or just behind Mr. Adams. He had been buoyed in recent weeks by several major endorsements, including from the Working Families Party, the New York City chapter of the Sunrise Movement, a climate advocacy group, and the United Federation of Teachers.

Yet the allegation against Mr. Stringer — who, along with some of his top supporters, has preached a zero-tolerance message in other instances of allegations against public officials — threatens to reorder the entire mayoral contest, and especially the battle for the left.

Mr. Brisport, the state senator, had supported Mr. Stringer as his second choice in June’s ranked-choice primary, with Dianne Morales, a former nonprofit executive, as his top pick. That was exactly the strategy Mr. Stringer had been working toward to engage the city’s furthest-left voters, but Mr. Brisport’s withdrawal of support on Thursday was a troubling sign.

The developments have also given new fuel to Ms. Wiley, as well as to Kathryn Garcia, the former sanitation commissioner, and other candidates who like Mr. Stringer are campaigning on a mantle of competence and government experience.

“It does open up the race in Manhattan in way that I think was not the case a few weeks ago, and probably Park Slope a bit,” said Alicia Glen, a former deputy mayor and supporter of Ms. Garcia's. “It has put those votes in play.”

Mr. Stringer on Thursday huddled on a private videoconference call with top supporters, including Representative Jerrold Nadler; representatives from major unions that have endorsed him, like the U.F.T.; and other supporters including State Senator Alessandra Biaggi and Assemblywoman Yuh-Line Niou, according to people familiar with the meeting.

“Any woman who has experienced any misconduct or abuse must be allowed to safely and freely come forward to share their story,” Mr. Nadler said in a statement. “I have known Scott to be a man of enduring character and integrity. Scott has clearly stated that there is no basis to these allegations, and I continue to support his candidacy.”

Others plainly had more reservations. Many of the left-leaning politicians who endorsed Mr. Stringer are waiting to see whether State Senator Julia Salazar and Ms. Biaggi rescind their endorsements of Mr. Stringer. Neither responded to text messages Thursday afternoon asking for their latest thinking.

One politician who endorsed Mr. Stringer said the campaign was working hard to stop others from rescinding their endorsements. Emissaries for Mr. Stringer’s campaign were adamantly making the case that any sexual activity with Ms. Kim was consensual. They also stressed that Ms. Kim was a 30-year-old woman, not a young intern just out of college, when the alleged incidents occurred.

In a statement, Tyrone Stevens, Mr. Stringer’s campaign spokesman, disputed several aspects of Ms. Kim’s account and that of her lawyer, Patricia Pastor. 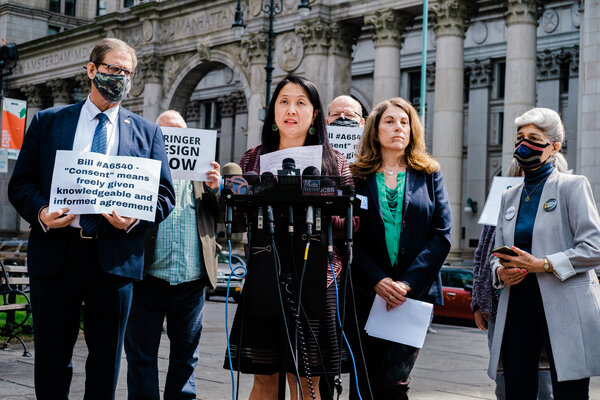 “They said Ms. Kim was an ‘unpaid intern’ on the Stringer campaign,” Mr. Stevens said. “This is false. In fact, she was a 30-year-old adult and friend of Scott’s who was employed elsewhere and had nothing to do with the campaign’s established internship program.”