ATLANTA — The allies of Stacey Abrams, the Democratic candidate trailing in the Georgia governor’s race, hit the streets and the phones on Friday in a vigorous last-minute push to get anyone who cast a provisional ballot to ensure that their vote would count, in the hopes of forcing the close, bitter and expensive contest into a runoff.

It was a dramatic and unorthodox political effort, a kind of post-campaign campaign to give Ms. Abrams the chance to go into a Dec. 4 overtime round with Brian Kemp, her Republican adversary.

Earlier this week, Mr. Kemp declared victory in the race and argued that no math could bring his total to less than 50 percent, which would automatically force a runoff. Mr. Kemp currently has 50.3% of the 3.9 million total votes cast, leading Ms. Abrams by about 63,000 votes.

President Trump, who has endorsed Mr. Kemp, declared him the victor on Twitter Friday. “It is time to move on!” he said.

It is not clear whether there are enough uncounted votes to help Ms. Abrams. She needs to amass about 24,000 votes to prompt a recount, and is just shy of 26,000 votes to pull Mr. Kemp below a bare majority and force a runoff next month.

The office of the secretary of state — which was occupied by Mr. Kemp until he resigned on Thursday — said on Wednesday night that it believed fewer than 25,000 votes remained to be tabulated across the state, including fewer than 22,000 provisional ballots.

Ms. Abrams’s campaign questioned those statistics, contending that with military and overseas ballots facing a Friday deadline for return, there was no way for the state to know how many ballots were pending.

The suspicion about Mr. Kemp’s motives run deep in Georgia. He has overseen legal purges of more than 1.5 million inactive voters, and moved more than 50,000 voters to “pending” status because their registration forms did not precisely match personal information on government databases. He has also basked in the support of Mr. Trump, who has made numerous unsupported voter fraud allegations.

Two days before the election, when Mr. Kemp was still serving as secretary of state, his office announced, with scant evidence, that it had opened an inquiry into the Democratic Party of Georgia for an attempted hacking of the voter registration system. Democrats assailed the announcement as bogus, and a political stunt.

“What Georgia and the country is witnessing in this election is blatant and callous voter suppression,” said State Senator Nikema Williams, state director of Care in Action, an advocacy group for domestic workers that also arranged much of the postelection phone banking. “We are doing everything we can to defend democracy in the cradle of the civil rights movement.” 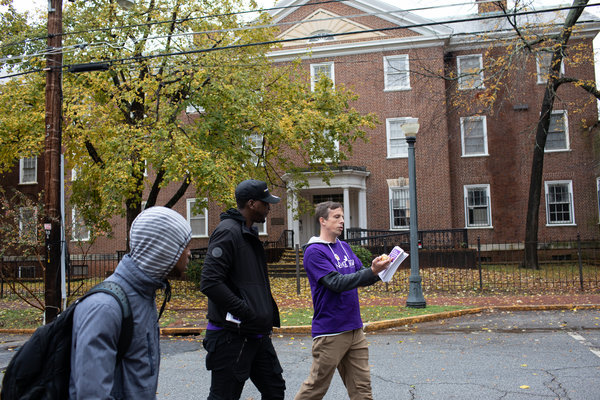 Late Friday, a pair of groups, including Care in Action, said that at least 12 of Georgia’s 159 counties had “prematurely certified election results.”

Candice Broce, a spokeswoman for the Georgia secretary of state, did not immediately respond to a message on Friday.

Mr. Kemp has called accusations of voter suppression a “farce,” and noted that registrations rose about one million statewide after he took office in 2010.

There was also widespread mistrust about his office’s claims about the number of uncounted ballots. “I don’t trust anything he says around the numbers,” Ms. Williams said in an interview. “What I do want to make sure is that every vote is counted.”

The effort to lock down the provisional votes unfolded Friday as an end-of-day deadline approached. The activists’ main target on Friday were those Georgia voters who had showed up to vote but had some kind of issue proving their identity at the polls.

Such voters were allowed to vote with a provisional ballot on Tuesday, but their ballots would not be counted unless they returned to their county elections boards with a valid ID to rectify any outstanding problems.

In Fulton County, which covers much of Atlanta, those problems had to be addressed before a 5 p.m. deadline.

And so a call for help went out among grass-roots liberal groups around the state. At a maze of cubicles at an office space in Atlanta’s Candler Park neighborhood, individual volunteers showed up after heeding calls pinging around online grass-roots networks, and began dialing as part of an effort overseen by Care in Action.

In front of them computers gave names of voters who were thought to have voted provisionally — lists that activists had demanded from elections officials in Georgia’s 159 counties.

Marisa Franco, a 27-year-old volunteer and a psychology professor, called a voter and, reading from a script, said, “The Georgia election isn’t over yet.”

She continued: “You need to go to your county election office ASAP to verify your ID. Once you go, ask them to give you proof that your vote has been counted.”

Professor Franco saw the call for volunteers on Facebook. “I feel like there is a lot of despair around a lot of the voter suppression things going on in Georgia,” she said.

She also held out hope that the votes could be found somewhere, and that Ms. Abrams would be able to fight on. “I wouldn’t be here if I didn’t think she had a chance,” she said.

The campaign also extended to cities in Georgia’s south, like Albany and Savannah, where Ms. Abrams performed well, and in Atlanta’s vote-rich suburbs, former bastions of Republican power that have undergone immense demographic changes and increasingly vote for Democrats in statewide races.

Around midday on Friday at the suburban Gwinnett Place Mall, volunteers shuffled into a Democratic office wedged between a shoe store and a vacant space to contact voters who had cast provisional ballots.

“I really want Stacey to win, and I think that the whole process with Kemp has been unethical,” said Deb Morelli, a retired paralegal, who drove from neighboring DeKalb County to volunteer after receiving a Thursday night text message asking for her help. “This is amazing for Georgia that we could come close to having a Democrat.”

In a lawsuit filed Thursday, Democrats argued that circumstances like Hurricane Michael had kept Dougherty County voters from receiving their ballots quickly. On Friday, a judge agreed, allowing the county to accept ballots that were postmarked by Tuesday and received by Friday. But it was unclear how many ballots would be added to the tally as a result.

A few hours before the Fulton County deadline, a group of canvassers with the New Georgia Project, a get-out-the-vote group Ms. Abrams founded, fanned out across the Atlanta University Center, home to a cluster of historically black colleges.

This was a sea of voters that had been well fished. Ms. Abrams is a graduate one of the famed schools, Spelman College. A week ago former President Barack Obama went to Morehouse College to stump for her.

Still, canvassers asked young people walking by if they had voted provisionally. Patrick McCaskey, a New Georgia Project employee, found one such voter, after many unsuccessful tries.

He was a slim young man burdened with a large backpack. “You know, you’ve got to get to the county before 5 o’clock,” Mr. McCaskey said.

The young man said something about having to get to class. Mr. McCaskey gave him a flier with instructions, and hoped for the best.

“It’s good to put the literature in their hands,” Mr. McCaskey said. “At least it reminds them.”