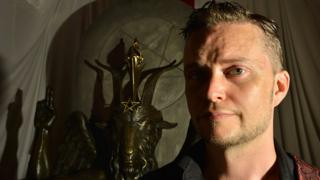 The Satanic Temple is suing the makers of TV series The Chilling Adventures of Sabrina for $50 million (£38m) over a statue.

Netflix and Warner Bros allegedly copied the group’s statue of the goat deity Baphomet in the programme.

Both production companies have declined to comment on the law suit.

Satanic Temple does not worship Satan, but instead seeks “to encourage benevolence and empathy among all people”.

Their lawsuit, filed on Thursday in New York, claims an icon similar to their own appears in four episodes of the series.

Lucien Greaves, co-founder of the Satanic Temple, posted a tweet comparing their statue with that in the show.

For purposes of comparison… pic.twitter.com/AZJvmq1Cks

The Chilling Adventures of Sabrina is a supernatural programme on Netflix following Sabrina Spellman, a half-mortal half-witch teenager. It is based on a comic book of the same name, which also inspired the show Sabrina the Teenage Witch, a series which ran from 1996-2003.

Characters in the show who worship the “Dark Lord” or Satan practice cannibalism and forced worship, and the Satanic Temple argues its members are being associated with these “evil antagonists”.

Mr Greaves confirmed the group was going to take legal action against the show’s production companies for “appropriating our copyright monument design to promote their asinine Satanic Panic fiction”.

Founded in 2012, the group does not believe in a supernatural Satan, but instead works to ensure the separation of church and state and holds Satan as a symbol of “opposition to arbitrary authority”.

The Satanic Temple created a statue of the goat deity Baphomet as part of its campaign to “complement and contrast” a Ten Commandments monument in Oklahoma City on the grounds of religious freedom.

Mr Greaves told US broadcaster CNBC that Baphomet has “come to represent us as a people” and that the statue in Sabrina “dilutes and denigrates” their group.