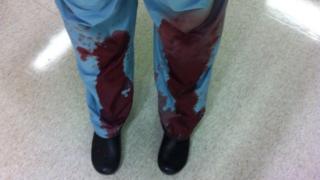 When America’s powerful pro-gun group told doctors to mind their own business, the response was swift, furious and viral.

“Unless you’ve had someone’s heart stop beating in your hands, you don’t get to tell those of us who have what is and is not our ‘lane’,” trauma surgeon David Morris, 42, told the BBC.

It came just hours before a gunman killed 12 people in a California bar.

“Someone should tell self-important anti-gun doctors to stay in their lane,” the NRA tweeted.

The personal stories and blood-splattered photos posted on social media in response by doctors and surgeons were shared hundreds and thousands of times, fuelling another debate about the reality of gun violence in the US.

[email protected] says docs should “stay in [our] lane.

My lane is a pregnant woman shot in a moment of rage by her partner. She survived because the baby stopped the bullet. Have you ever had to deliver a shattered baby? #ThisisMyLane . What’s yours? #Docs4GunSense

You have never had to wipe the blood off your shoes before you tell the mother of a 17 yo boy that she will never hug her son again. THAT is my lane. Come to work with me for one day and see the impact gun violence has on our country. #ThisIsOurLane #BAFERDS #StopGunViolence https://t.co/Ecr2PQWWj2

Dr Morris was one of many using Twitter to hit back at the NRA, joining 70,000 others using the hashtag #ThisIsOurLane.

“People need to see the reality of what we deal with. Too often, we get stuck on the same old philosophical arguments about gun violence,” Dr Morris, who is based in Utah, explained to the BBC.

Guns send 8,300 children to hospital each year in the US, the majority of whom die, while the number of violent gun deaths in America is greater than the Middle East, once armed conflict-related casualties are factored out.

He was deliberately vague about the details behind the photograph of his bloodied scrubs “because it is representative of countless times that this has happened to me and every other person who works in trauma”.

Can’t post a patient photo…. so this is a selfie.

Doctors like him are not anti-gun or anti-NRA, he suggests.

“We are anti-violence. Violence is the real problem; guns are simply a vector. What we hope for is the opportunity to study the problem and apply sound scientific methodology to making things better.”

The question of studying gun violence as a public health issue, an approach Dr Morris supports, is at the centre of a long-running conflict between the health profession and the NRA.

The NRA tweet that spurred so much anger was prompted by the publication of a paper by the American College of Physicians stating that medical professionals have a “special responsibility” to speak out on prevention of gun-related injuries and that they should support “appropriate regulation of the purchase of legal firearms.”

For years, the NRA, which spent more then $5 million on political lobbying in 2017, has tried to stifle public research into gun violence, including by the Centres for Disease Control and Prevention (CDC).

A bill passed in March allows the CDC to research the causes of gun violence, but a 1996 law still prevents the organisation from advocating or promoting gun control.

Another doctor whose condemnation of the NRA was widely shared is forensic pathologist Judy Melinek, based in San Francisco.

“I was incensed that the NRA would tell doctors to ‘stay in their lane’. Not a week goes by that my morgue doesn’t see the carnage resulting from Americans’ easy access to guns,” the 49-year-old explained to the BBC.

Dr Melink has carried out post mortems in over 300 gunshot wound cases, including children caught in crossfire or even intentionally killed by parents, as she explained in a comment piece for Vox.

“No one knows gunshot wound death more intimately than forensic pathologists. We are literally qualified as experts on the subject. We have to speak out,” she commented on Monday.

The NRA has not responded to requests for comment.