ELIZABETH CITY, N.C. — Lawyers for the family of Andrew Brown Jr., a Black man who was shot and killed by sheriff’s deputies in coastal North Carolina last week, said Tuesday that a private autopsy paid for by Mr. Brown’s family showed that he was hit by five bullets and killed by a shot to the head.

During a Tuesday morning news conference, one of the lawyers, Wayne Kendall, said that an independent pathologist noted four wounds to Mr. Brown’s right arm and one to the back of his head. Mr. Brown was shot Wednesday in Elizabeth City by deputies serving drug-related search and arrest warrants, the authorities have said.

Despite appeals from North Carolina’s governor and other elected leaders, as well as community activists and Mr. Brown’s family, the authorities had not publicly released body camera footage of the deadly encounter as of Tuesday morning.

Days of demands for the footage continued after family members of Mr. Brown and one of their lawyers were shown a 20-second snippet of his final moments. The lawyers said the private viewing inside the Pasquotank County government building on Monday afternoon amounted to a sliver of the footage that must exist of last week’s shooting.

What the video did show, said Chantel Cherry-Lassiter, the lawyer who watched with the family, was the “execution” of Mr. Brown, 42, who she said was sitting inside his car, hands “firmly on the wheel,” when the gunfire began.

Mr. Brown, who was Black, did not appear to be holding a weapon and was driving away from the deputies when they continued shooting, she said, while trying to arrest him on a drug warrant on Wednesday morning.

In an impassioned news conference after seeing the video, Ms. Cherry-Lassiter and other lawyers for the family decried the lack of transparency, saying the footage was only from one body camera when there were several deputies on the scene. Seven deputies were placed on administrative leave after the shooting.

Ms. Cherry-Lassiter’s description of the footage offered the closest glimpse yet of a fatal shooting that took place one day after a Minnesota jury found a former police officer guilty of murder in the death of another Black man, George Floyd.

It also came on the heels of several other police killings, including the shooting deaths of Adam Toledo, 13, in Chicago and Ma’Khia Bryant, 16, in Columbus, Ohio.

Chantel Cherry-Lassiter, a lawyer for the family of Andrew Brown Jr., a Black man who was killed by sheriff’s deputies in Elizabeth City, N.C., held an impassioned news conference after viewing a 20-second snippet of footage showing his final moments.

“Let’s be clear: This was an execution. Andrew Brown was in his driveway. The sheriff truck blocked him in his driveway, so he could not exit his driveway. Andrew had his hands on his steering wheel. He was not reaching for anything. He wasn’t touching anything. He wasn’t throwing anything around. He had his hands firmly on the steering wheel. They run up to his vehicle, shooting.” “Oh, no.” [crowd murmurs] “He still stood there — sat there in his vehicle with his hands on the steering wheel while being shot at. Now, keep in mind, this is 20 seconds. I have three pages of notes for 20 seconds. We watched this over and over and over to make sure we were clear at what was going on and what was transpiring. There were shell casings before he even backed out. So they were shooting at him when he was sitting there with his hands on the steering wheel in the driveway.” “And before the video started.“ “Also, we only saw — again, I want you to know about those 20 seconds. There were things that transpired before those 20 seconds that we did not see. So, I don’t know how many shots were fired before the little 20 seconds they allowed us to see. 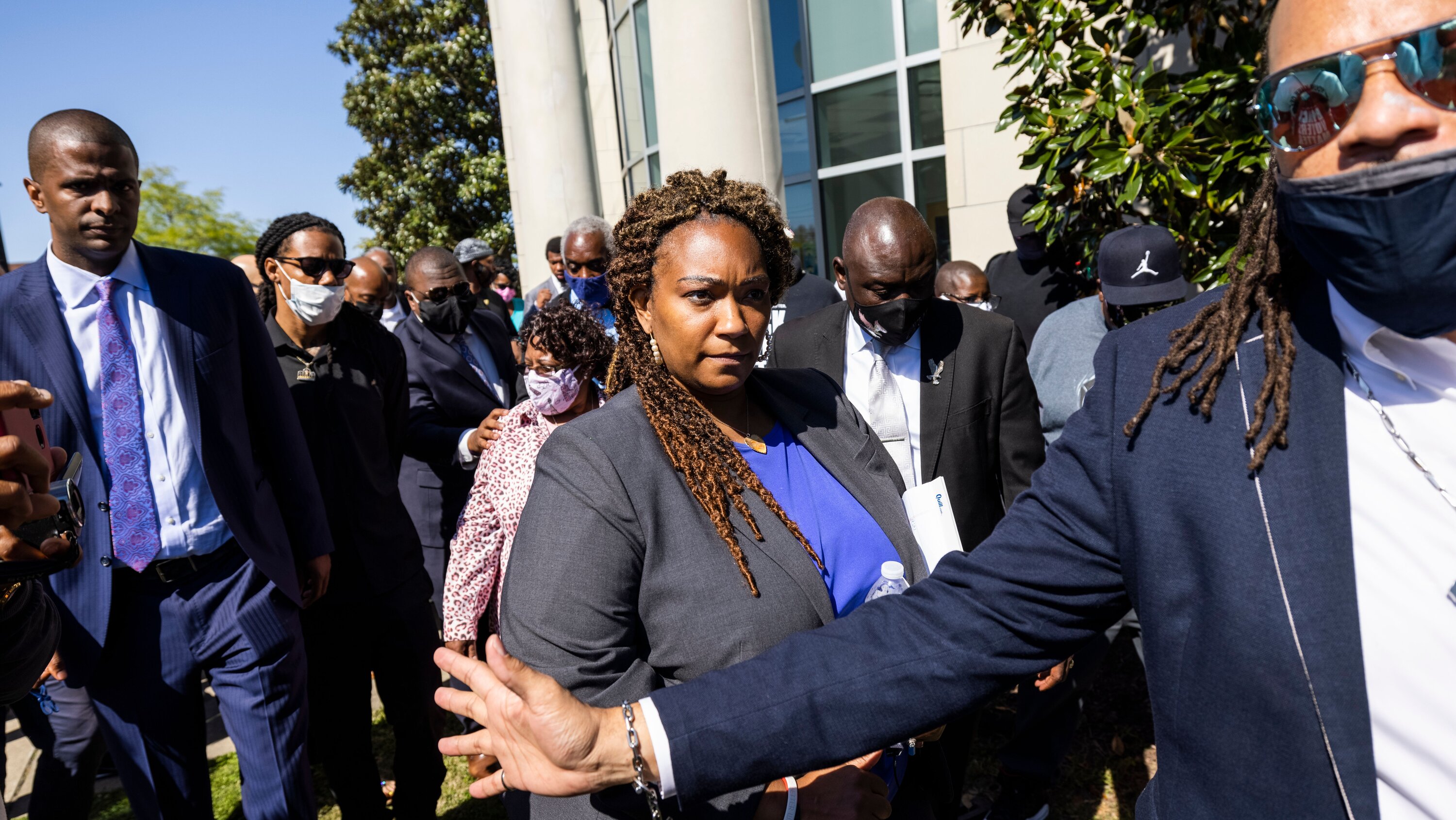 The fact that the videos have not yet been made public has become a key source of anger for protesters who have spent days peacefully filling the streets of Elizabeth City, a historic town of about 18,000 people on the Pasquotank River, about an hour’s drive south of Norfolk, Va. Officials in Elizabeth City and surrounding Pasquotank County issued emergency declarations on Monday morning, citing a potential for “a period of civil unrest” whenever the footage was publicly released.

Sheriff Tommy Wooten II of Pasquotank County, who has faced calls to resign from the local N.A.A.C.P., has said that he supports releasing the videos. Late Monday afternoon, he released a short videotaped message in which he was flanked by Chief Deputy Daniel Fogg, who said that the county attorney had filed a petition for the release of the videos.

“This tragic incident was quick and over in less than 30 seconds,” Sheriff Wooten said in the video, “and body cameras are shaky and sometimes hard to decipher. They only tell part of the story.”

News media outlets also filed a legal action in an effort to have the footage released, but their lawyer, Michael J. Tadych, said on Monday that he was not sure when his case would receive a hearing.

Under North Carolina law, police body camera videos can only be released to the public with the approval of a judge. Anybody, including the news media, a police department or a citizen, can request the release of a video, though certain stakeholders can object to its release or ask for sections to be blurred, said Frayda Bluestein, a professor of public law and government at the University of North Carolina.

At the news conference on Monday, Ms. Cherry-Lassiter said the footage she and the family saw showed Mr. Brown behind the wheel of his car in his driveway, a sheriff’s vehicle blocking his exit and deputies surrounding him. “They run up to his vehicle shooting,” she said. Mr. Brown backed up, away from the officers. “It was at no time in the 20 seconds that we saw that he was threatening the officers in any kind of way,” she said.

She said deputies shot at Mr. Brown’s car as he drove away, running behind him until he hit a nearby tree.

“It’s just messed up how this happened,” said Khalil Ferebee, Mr. Brown’s son, who viewed the footage multiple times. “He got executed. It ain’t right. It ain’t right at all.”

The Sheriff’s Office has released scant details about the shooting, which is being investigated by the North Carolina State Bureau of Investigation.