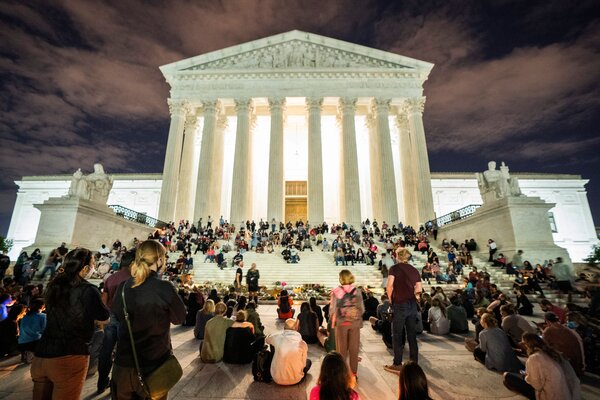 In 2016 and 2018, many analysts concluded that Supreme Court politics helped Republicans by helping to energize or consolidate conservative voters.

True or not, it certainly wasn’t obvious ahead of time which side would benefit from a court vacancy, and the same can be said today, in the aftermath of the death of Justice Ruth Bader Ginsburg. There’s no way to know exactly what will unfold, but a closer look at recent polls, including new New York Times/Siena College surveys, does provide reason to think that Joseph R. Biden Jr. might have as much — or more — upside on the issue than President Trump.

What voters say on picking the next judge

In Times/Siena polls of Maine, North Carolina and Arizona released Friday, voters preferred Mr. Biden to select the next Supreme Court justice by 12 percentage points, 53 percent to 41 percent. In each of the three states, Mr. Biden led by just a slightly wider margin on choosing the next justice than he did over all.

Among issues favorable or unfavorable to the two candidates, appointing a Supreme Court justice ranked somewhere in the middle of those tested by the survey. It was a better issue for Mr. Trump than handling of the coronavirus or race relations, but a much better issue for Mr. Biden than the economy or law and order.

So far this year, Mr. Biden and Mr. Trump have tended to gain when the national political conversation focuses on their best issues. If the pattern holds and the most recent poll results are representative, it’s not obvious whether either candidate will benefit from a focus on the Supreme Court.

A closer look at the results suggests there might be some upside for Mr. Biden among persuadable and low-turnout voters. Voters who either weren’t backing a major-party candidate or who said they could still change their mind said they thought Mr. Biden would be better at choosing the next justice by an 18-point margin, 49 percent to 31 percent. And voters who said they weren’t “almost certain” or “very likely” to vote said they thought the same by an even larger 52-23 margin.

Of course, there’s no guarantee that Mr. Biden will retain a lead on the issue. Perhaps Mr. Trump’s standing on the issue will benefit if he rolls out a popular nominee. But another divisive fight over the Supreme Court might also prove to be the kind of exhausting, partisan conflict that leaves many voters seeking a more bipartisan approach to politics. That might be good news for Mr. Biden, who enjoys a commanding lead on which candidate would do a better job of unifying America.

There’s a common view that the vacant Supreme Court seat created by the death of Antonin Scalia helped Republicans in the 2016 election by motivating religious conservatives who otherwise were not fans of Mr. Trump. Indeed, a Pew poll at the time found that Trump supporters were eight points likelier than Clinton supporters to call Supreme Court appointments a “very important” issue. The exit poll was even more stark: 21 percent of voters said Supreme Court appointments were the most important issue, and they backed Mr. Trump over Hillary Clinton, 56-41.

But this year, it’s Democrats who are more likely to say the Supreme Court is “very important” to their vote, according to Pew Research.

The Republican decision not to hold hearings on President Obama’s nominee, Merrick Garland, to replace Justice Scalia after his death in February 2016 kept the seat vacant all the way through the general election and into the next year.

Voter sentiment favored Judge Garland at the time. And the same was true afterward: A Marquette Law poll in late 2019 found that voters thought the Senate decision not to hold a hearing was the wrong thing to do, by 73 percent to 27 percent.

How voters will feel if President Trump nominates a Supreme Court Justice is potentially a very different matter. For one, it is far closer to the election, and Mr. Trump is less popular than President Obama was at the time.

And it’s possible that the perceived unfairness of denying Judge Garland a hearing may spur fervent opposition to a Republican nominee receiving different treatment, rather than continued support for giving a nominee a hearing in an election year.

The Republican base is already motivated

Many believe that the fight over Justice Brett Kavanaugh, who was publicly accused of sexual assault almost exactly two years ago, helped motivate conservative voters in 2018 and helped spare Republicans an even more decisive defeat in the midterm elections.

There was some evidence to support that at the time: Mr. Trump’s approval rating increased by about 1.5 points from the beginning of the Kavanaugh hearings to the midterm election, according to FiveThirtyEight. Polls at the time showed Republicans consolidating their support in conservative districts.

But today, Republicans are already motivated. In the aftermath of the Republican convention, Mr. Trump is already riding high: His approval rating is higher today than it was at this point two years ago.

That’s not to say that Republicans — or Democrats — can’t become more energized. But 2020 is not like 2018, when Democrats entered the heart of the campaign season with the enthusiasm edge, and Republicans plainly had more upside.