Alex Padilla, California’s secretary of state, has emerged as the front-runner to succeed Kamala Harris. But Gov. Gavin Newsom appears to be in no rush to make his choice. 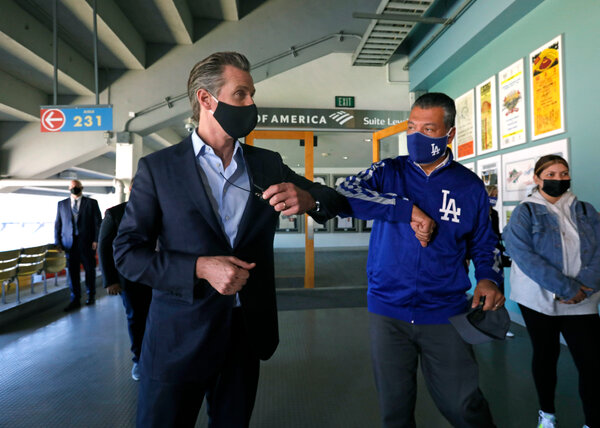 By Shawn Hubler and Alexander Burns

SACRAMENTO — Since Gavin Newsom’s days as a young upstart running for mayor of San Francisco through more than two decades of public life, Alex Padilla has been a stalwart ally.

Now Mr. Newsom is in a position to return the favor: He must appoint someone to fill the soon-to-be-vacant U.S. Senate seat of Vice President-elect Kamala Harris. Though many names have been floated to succeed Ms. Harris, Mr. Padilla has emerged as the front-runner, according to more than a half-dozen advisers, political consultants and fellow lawmakers familiar with the governor’s thinking.

Yet nearly a month after Ms. Harris’ election, Mr. Newsom has not yet named a successor — and the pressure is mounting.

“Look, all roads lead to Alex Padilla,” said Nathalie Rayes, president of the Latino Victory Fund, which has waged a “Pick Padilla” campaign since August. “I think the longer he waits — well, I would have done this a long time ago, but I’m not the governor of California.”

Since President-elect Joseph R. Biden Jr. chose Ms. Harris as his running mate in August, the question of her successor has been a matter of high-stakes speculation. Mr. Newsom faces extraordinary crosscurrents of factional rivalry and identity politics in a state where the Democratic Party is thoroughly defined by both.

He has spoken about the Senate appointment not as a political bauble that he is eager to dispense, but as a burdensome task that is likelier to generate grudges than personal gratitude and popular excitement. That sense of looming peril has only deepened in recent days, following news that Mr. Newsom breached his own administration’s public-health guidance to attend an extravagant birthday gathering at the French Laundry restaurant for a longtime political adviser.

Critics have seized on the faux pas, adding to the challenges Mr. Newsom already has as his state grapples with a terrifying surge of Covid-19, ongoing problems in its unemployment benefits system and an imminent loss of the federal stimulus funds that underwrote temporary shelter for tens of thousands of homeless people during the pandemic.

“That determination has not yet been made,” he said, speaking from his home, where he was in quarantine after three of his four children were revealed to have been in contact with a California Highway Patrol officer who later tested positive for Covid-19.

He said he hadn’t laid out a timeline for the decision, beyond that it must be made before Jan. 20, when Ms. Harris is sworn in as vice president. But, he added, “progress has been made.”

The uncertainty has made room for lobbying by an array of aspirants and their political proxies. During some weeks it has seemed that the list of candidates for the post has continued to grow rather than narrowing toward an eventual selection.

Democratic leaders have sought to tug Mr. Newsom in different directions, playing on what they see as his short- and long-term political aspirations. Some argue that he must appoint a Black candidate if he hopes to prevail someday in a Democratic presidential primary, others that he must name a Latino to win a comfortable re-election in 2022, still others that Ms. Harris must be replaced by another woman or that he must placate progressives if he wants to govern successfully in an ongoing fiscal crunch.

This is in addition to the hard fundamentals of campaigning statewide in California, which both the governor and Senator Harris’ successor will have to do in 2022, when their terms end. California, the most populous state, has myriad subcultures — north and south, coastal and inland — and primary campaigns alone can cost millions of dollars.

Though Republicans are less than a quarter of registered voters in the state, another third or so of the electorate has no party preference and turnout drops in off-year elections. Whomever Gov. Newsom appoints will need not only experience but the cash, the campaign operation and the charisma to turn out Democrats from the Mexican border to the Oregon state line.

Mr. Newsom has held conversations with a few potential appointees, though he does not appear to have conducted formal interviews for the job, people familiar with the process said.

Mr. Padilla, 47, has emerged as the favorite of Latino lawmakers, advocacy groups and a number of labor officials, and his circle of political advisers overlaps significantly with Mr. Newsom’s. The middle son of Mexican-born parents — a short-order cook from Jalisco and a housekeeper from Chihuahua — Mr. Padilla worked his way through the Massachusetts Institute of Technology, earning a degree in 1994 in mechanical engineering. 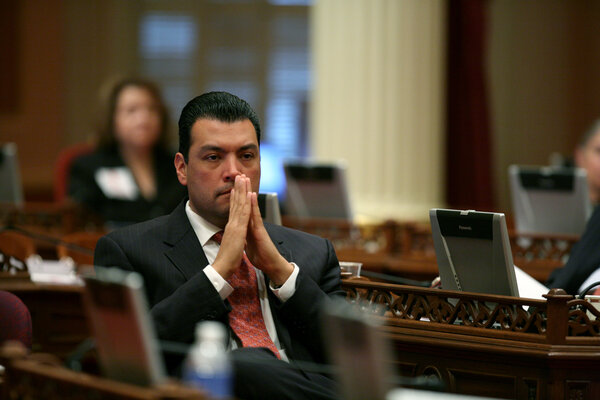 He and his siblings still live within five miles of the house where they grew up in Pacoima, Calif., in the San Fernando Valley. His original plan, he says, was to work in aerospace but the anti-immigrant politics that swept California in the early 1990s propelled him instead to political activism.

“That really was a wake-up call,” he said last week, chopping onions for pumpkin chili as he spoke from his home. Relatives chattered in the background; he and his wife, Angela, have three children and his mother-in-law lives with them. “I knew I’d have to do my part or our community would continue to be scapegoated.”

After his graduation, he worked in the office of U.S. Sen. Dianne Feinstein. By 1999, he was a 26-year-old city councilman representing his old neighborhood. By 2001, he was L.A.’s youngest-ever City Council president.

In the State Senate, where he spent eight years, Mr. Padilla chaired Mr. Newsom’s 2009 bid for governor before Jerry Brown got into the race and Mr. Newsom dropped out, running for lieutenant governor instead.

In 2014, Mr. Padilla ran for the secretary of state’s office on a promise to register a million new California voters. As a result of legislation he pushed that registers Californians to vote when they get a driver’s license, the state has added more than 4 million.

Exit polls showed that a third of this year’s California’s electorate is Latino, a group that makes up 40 percent of the state’s population. Yet the state has never elected a Latino senator or governor. Mr. Newsom helped ensure that lockout continued in the 2018 elections, when he trounced one of the state’s most prominent Latino Democrats, former Los Angeles Mayor Antonio Villaraigosa, in a primary election.

“There’s been a failure by both political parties to champion the needs of a growing electorate,” said Sonja Diaz, director of Latino Policy and Politics Initiative at the University of California, Los Angeles. Choosing a Latino for one of the nation’s most powerful posts, she added, would help reverse that.

But other Latino candidates also have supporters. California Attorney General Xavier Becerra, 62, has run and won statewide and has represented Los Angeles in Congress; his name also has come up as a potential member of the Biden cabinet.

And Long Beach Mayor Robert Garcia, 42, the city’s first openly gay mayor, has an enthusiastic base. In addition to leading what would be the biggest city in many other states, Mr. Garcia’s history-making personal biography and charisma have earned him attention in the national Democratic Party.

On Wednesday, Mr. Garcia — who has been a backer since 2009 of Gov. Newsom — said addressing a coronavirus surge hammering Los Angeles County is his top priority at the moment and would not speak at length about the Senate vacancy.

“Anybody would be honored to serve their country in that way,” he said. “But I’m going to support whoever the governor selects.”

Should Mr. Newsom elevate a statewide officer like Mr. Padilla or Mr. Becerra to the Senate, it would also create a new vacancy for him to fill — potentially furnishing him with a consolation prize for a person or group disappointed by his Senate decision.

Still, active campaigns are underway to urge Mr. Newsom to replace Ms. Harris with a woman, particularly a Black woman. Led by longtime state Democrats like Willie Brown and groups of high-dollar female donors, they argue that when Ms. Harris resigns and assumes her new office, the Senate will once again have no Black female members. The number of women of color in the chamber would drop by a quarter to just three: Tammy Duckworth of Illinois, Mazie Hirono of Hawaii and Catherine Cortez-Masto of Nevada.

At least two Black women in California’s House delegation are pursuing the appointment: Representatives Barbara Lee, 74, and Karen Bass, 67, though Ms. Lee is seen as mounting the far more determined campaign for the job. Ms. Bass, who was vetted for the vice presidency last summer, is under consideration for potential cabinet jobs in the Biden administration as well.

Neither endorsed the governor during the 2018 Democratic primary. But both women are highly regarded on the left, as is a third member of the House delegation who is interested in joining the Senate, Representative Ro Khanna, 44, a former co-chairman of the Bernie Sanders presidential campaign.

Asian-American leaders in the state have also encouraged Mr. Newsom to consider choosing a member of the increasingly politically organized community, such as Mr. Khanna or Representative Judy Chu, who chairs the Asian Pacific American Caucus in the House.

Another prominent progressive, Representative Katie Porter of Orange County, is seen as a probable candidate for the Senate at some point, but perhaps more likely to seek the seat currently held by Senator Dianne Feinstein, who is 87 and announced this week she was stepping down as the top Democrat on the Senate Judiciary Committee.

There are practical reasons, however, why it may make sense for Mr. Newsom to avoid an appointment from the House. Democrats are expected to hold only a tiny majority in the chamber in January and that number could shave down even further if lawmakers accept appointments for jobs in the Biden administration.

Some Democrats have also suggested a long shot option that Mr. Newsom could appoint a distinguished figure in the late stages of their public life, who would serve out the remaining two years of Ms. Harris’s term without seeking re-election — someone like Dolores Huerta, the civil rights leader and labor organizer, who is 90, or Mr. Brown, who is 86.

For the moment, Mr. Padilla downplayed the urgency of Mr. Newsom’s decision.

“He’s a deliberate person with tons on his plate,” said Mr. Padilla. “There are wildfires. There’s Covid. He has a budget due in January. This is just one more significant item.”

But Ms. Rayes of the Latino Victory Fund was less patient.

“I know other people have their favorites, and I guess he’s just really feeling the pressure,” she said. “But it would be easier to just come out with it.”