‘On the Ashes of Tragedy’: Mixed Emotions on Anniversary of George Floyd’s Death

MINNEAPOLIS — It was a day of reflection, of remembrance, a time to lay flowers and say prayers, to celebrate Black culture with art and music and food, and to recall the life of a man whose death, one year ago, shook the country and forced it to confront its painful legacy of racism and police brutality.

In Minneapolis on Tuesday, as people gathered to mark the anniversary of the police killing of George Floyd, there was space for it all: the trauma and the grief; some celebration, over a murder conviction of a police officer; and a measure of hope, too, that in death Mr. Floyd, a Black man, had nudged America toward more racial equality.

Mr. Floyd’s death has “really highlighted for so many people in the country the problems of police brutality and the need to defend the humanity of Black and brown people,” said Debby Pope, a Chicago teacher who came on Tuesday to George Floyd Square, where Mr. Floyd was killed.

“Of course, it’s solemn because we are remembering a brutal murder,” she said. “But it’s also a cause for celebration because on the ashes of tragedy the community has built something really beautiful.” 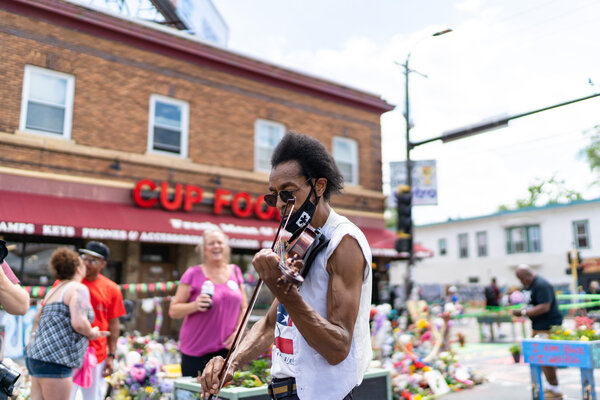 Even as all eyes were on Minneapolis — where the governor issued a proclamation for a moment of silence lasting nine minutes and 29 seconds, the amount of time a white officer’s knee remained on Mr. Floyd’s neck — people gathered in remembrance all across the country, to honor not just the life of Mr. Floyd, but to reflect on what has changed, and what has not, in America.

All this was happening as members of the Floyd family met privately with President Biden and Vice President Kamala Harris at the White House. Afterward, the White House issued a statement in which Mr. Biden said that while it had been a year since Mr. Floyd’s death, “the first year can still feel like they got the news a few seconds ago.”

The president said he was hopeful that a police reform bill that has stalled in the Senate would reach his desk soon, saying, “we face an inflection point.”

“The battle for the soul of America,” he continued, “has been a constant push and pull between the American ideal that we’re all created equal and the harsh reality that racism has long torn us apart.”

And at an event in a downtown park in Minneapolis, Bridgett Floyd, one of Mr. Floyd’s sisters, said she had boycotted the meeting with Mr. Biden because the president had been unsuccessful in getting Congress to pass the legislation.

“He broke his promise but I am going to give him a couple more weeks,” she said, noting that many other people have been killed by the police since her brother’s murder. “There were a lot of names added after my brother’s death. Not much is being done.”

The several days of events surrounding the anniversary of Mr. Floyd’s death have been not just a moment of uplift, but also a time to remind the nation of its unfinished business in addressing a history of racism and inequity that the killing laid bare.

“For the first time I feel like folks in power are realizing something is wrong,” said Vernon Rowland, who lives two blocks from the street corner where Mr. Floyd was killed, a space that he called “holy ground.” “This was the first time the world stopped and noticed and recognized this was murder. The response from white people has been a new experience. That is incredibly encouraging. Have we gone far enough? No.”

On the evening of Memorial Day last year, the Minneapolis Police Department issued an incomplete statement headlined, “Man Dies After Medical Incident During Police Interaction.” The world would soon learn the upsetting details from a teenager’s cellphone video that showed Mr. Floyd struggling to breathe under the weight of an officer’s knee.

Millions of people, in the middle of a pandemic, flooded the streets of big cities and small towns, forcing a reckoning on racial injustice upon the country.

Difficult conversations about race, over the dinner table and in corporate boardrooms, took place across the country, as the harrowing video was played over and over on cable news.

“We’re figuring out how to talk to our children, our students,” said Ms. Pope, the teacher from Chicago. “We’re not pretending this doesn’t exist anymore.”

State legislatures and city councils approved police reforms, and in some cases took money away from police departments after calls from demonstrators to “defund the police.” National legislation, however, remains stalled; the George Floyd Justice in Policing Act has passed the House, mostly along party lines, but not the Senate.

Keith Ellison, the Minnesota attorney general who oversaw the prosecution of Mr. Chauvin, quoted James Baldwin in a statement on Tuesday that pointed to America’s never-ending cycle of police abuses and protest. He said Black Americans had been “gaslit” about police violence for a century.

“But this time, the witnesses to George Floyd’s death and everyone in the world who watched their videos refused to be gaslit,” he said. “They believed their eyes.”

In New York, demonstrators said that the killing of Mr. Floyd had energized the Black Lives Matter movement that began after the death of Trayvon Martin in 2012, but that the country still had a long way to go.

“I can pull out my cellphone right now and show you fresh police brutality videos,” said Hawk Newsome, a founder of the New York chapter of Black Lives Matter. “So, how much has really changed with the police?”

Even as activists have pushed for police reform in the wake of Mr. Floyd’s death, they worry that not enough attention has been paid to the systemic inequities of American life, from housing to education to health care.

“Our schools are still suffering,” Mr. Newsome said. “Our people are still unhealthy, they’re facing disparities in health care. The police are predators in our communities. And there’s been no real help. Everything has been symbolic.”

The Rev. Corey Brooks, a pastor on Chicago’s South Side, said the death of Mr. Floyd brought out divisions in the country that had long lurked under the surface. “The political extremes have made things difficult for the country, and it’s making things even more difficult for people to find common ground,” Mr. Brooks said. “We have to find some way to come together as a country. If we don’t, we’re going to destroy ourselves.”

He said he welcomed last summer’s protests but condemned the rioting and looting that took place in cities including Chicago, where some stores on the South Side — a drugstore, a gift shop — remain closed.

Over the past year, as the country grappled with the aftermath of Mr. Floyd’s killing, many cities have faced a surge in gun violence that has forced political leaders to reconsider how far they are willing to go to reimagine public safety.

Minneapolis, where many City Council members agreed to dismantle the Police Department before backtracking, has seen a sharp rise in gun violence, with homicides last year reaching the highest level since 1995. The area around George Floyd Square, which has remained barricaded and off-limits to the police, has seen a rise in gang violence, particularly at night.

As mourners gathered on Tuesday, they could not escape the scourge of gun violence. As people somberly gathered, gunshots rang out, sending activists and bystanders running for safety. One girl screamed for her mother as she ran into a corner behind portable toilets, and organizers yelled for children to run to one side.

A short time later, the Minneapolis Police Department issued a statement, saying it had responded to gunshots in the area, and that one person arrived at a nearby hospital with a gunshot wound.

Slowly, activists and others returned to the square, but in a smaller number than before.

As a Black mother, Marietta English, a retired teacher from Baltimore who traveled to Minneapolis for the anniversary, said she was shaken last year when she saw the video and heard Mr. Floyd calling out for “mama.” It could have been her son. From a young age, she said, she taught him how to survive an encounter with the police — keep your hand on the steering wheel, do not reach for anything.

“You worry everyday when they walk out the door,” she said, adding that seeing so many people come out to celebrate Mr. Floyd’s life had given her hope. “Right now I feel there is hope. Hope for America. Hope for my grandsons.”