SALEM, Mass. — It was late April at Witchcraft Heights Elementary School, and Roneline Ramoutarsingh was still feeling nervous about Covid.

Not about getting it herself. By this point, Mrs. Ramoutarsingh, a third-grade teacher in Salem, Mass., was fully vaccinated and confident enough that she had started pulling down her mask when she was speaking to her students from the front of the room, so they wouldn’t constantly ask her to repeat herself.

But she was nervous that a decision she made in class — to let the kids work in groups, for example — might trigger an outbreak and send her students back to remote learning. Earlier that month, shortly after five-day-a-week, in-person learning had resumed, several students had tested positive, and nearly the entire class had had to quarantine.

Some of the students had been despondent about being confined at home again. And when only half of them showed up on Zoom during their quarantine, Mrs. Ramoutarsingh was despondent, too.

“I’m obviously all about collaborating with the kids,” said Mrs. Ramoutarsingh, a wiry 35-year-old who addresses her students with endearments like “sugar” and “love bugs.”

But, she said, “Now I’m more cautious to do that because of what happened in the room.” 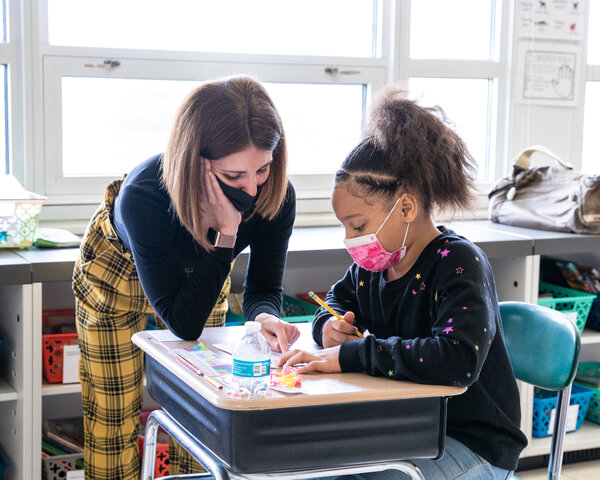 It was the kind of dilemma that Mrs. Ramoutarsingh faced often this spring, as she tried to give her students the social and academic opportunities they had missed during months of remote learning, while balancing safety protocols and, for several months, the challenge of simultaneously teaching students who were in person and at home.

For her students, a disruptive year of learning, which concluded last week, came at a critical time. In third grade, students are supposed to finish mastering the foundations of reading. They are also supposed to learn multiplication and division and how to compare fractions.

The Times spent several days this spring visiting Mrs. Ramoutarsingh’s class as it navigated this year’s balancing act of learning while staying safe.

What emerged was a complex picture of loss and resilience.

The students had missed several months of math content during the school shutdown last spring, but ended up progressing at essentially a normal pace.

Reading instruction had been harder to transfer online, and the students’ average reading level was lower than it had been for the school’s third graders in the previous year.

Most surprising was an unexpected bonus. Mrs. Ramoutarsingh initially had worried about how she would build relationships with her students in a year that started off fully remote. In the end, she felt more deeply connected to them because of that.

“It’s really brought their lived experience into my classroom in ways I haven’t been able to do before,” she added.

Salem, a city of 43,000 people on the coast north of Boston, is famous for the witch trials that took place there in the late 17th century. The school district’s roughly 3,900 students are mostly Hispanic and white, with small minorities of Black and Asian American students. More than half of families in the district receive some form of government assistance.

Salem had originally planned to start the 2020-21 school year with kindergarten through third grade in school full-time, but changed its plans in August when cases surged locally.

Ultimately, the district brought kindergarten through second grade back full-time in November, but did not invite all third graders back until January.

“There are moments when I wish we had more kids in earlier,” the superintendent, Stephen Zrike, said in an interview, “but you’re trying to manage people’s stress level to the extent possible.”

For Mrs. Ramoutarsingh’s students, the year’s challenges had been both academic and social.

There were also small triumphs amid the stress.

A nine-year-old boy named Jameson Dwan, who had moved to Salem in the fall from a nearby district, said he didn’t have any friends in his class during the first part of the year. Then one of his classmates, Akeem Ilboudo, invited him and the other classmates to join an after-school Zoom. Akeem soon became his best friend.

“He just came along and he was like the knight or something — the superhero,” Jameson said.

When the district decided to start the year remotely, it invited roughly 950 students whom it considered most vulnerable — including students who were homeless or just beginning to learn English and those who had no internet access at home — to come do their remote learning in classrooms that it called “hub labs,” under the supervision of teachers or paraprofessionals. Roughly two-thirds of the families accepted the invitation.

By late April, more than 80 percent of the students at Witchcraft Heights had come back to school in person.

Unlike in other years, when Mrs. Ramoutarsingh gathers her students on a rug at the front of the room for lessons, this year they had to sit at individual desks, carefully distanced. Between January and early April, when most of the students were only there in person two days a week, many students in the classroom spent part of their day with their laptops out and headphones on, so they could hear their classmates at home.

Even under these circumstances, Mrs. Ramoutarsingh said, several students did significantly better at school than they had online. Amadith Maradiaga Sanchez, 8, had been in the hub lab since September. Beginning in January, he was in class with Mrs. Ramoutarsingh four days a week.

“I found it really hard to build a relationship with him when he was in the hub lab, because it was difficult navigating the technology, and he’s a very quiet student, so he wouldn’t much interact on remote,” Mrs. Ramoutarsingh said.

After she came back in person, she said, that changed.

“The first time he saw me in person, he said, ‘I’m so excited you’re here — you’re so beautiful!’” she recalled.

He was easily distracted and sometimes sleepy in the morning, so she seated him in the front of the room where she could periodically remind him to sit up in “a learner stance.” She gave him paper copies of assignments so he didn’t have to work on the computer. And, as was the case with several students, she was pushing him to be more independent — to start working on a math problem set himself before immediately asking for help.

The months of remote learning seemed to have most impacted students’ progress in reading.

Mrs. Ramoutarsingh said that, when she was teaching in person, she would usually give a short lesson to the whole class, and then work with a small group while the rest of the students read independently. But online, she said, it had been hard to know if those students were actually reading or getting distracted by other activities.

When the district tested reading achievement in February and March, the results were concerning. A year before, in 2020, 32 percent of Witchcraft Heights’s third graders had scored at the lowest level on the assessment (“Does Not Meet Expectations”). This year, 52 percent did.

The school assigned its literacy specialists this spring to work primarily with students in kindergarten through third grade, the students most affected by remote learning.

Mrs. Ramoutarsingh felt that math instruction had gone better remotely, though some students had still struggled. Two mothers said that their sons had often been reduced to tears of frustration during remote math lessons.

Absences, which were frequent, also inhibited some students’ progress. The fact that, until April, students could always sign in online made them and their parents feel like attending in person was optional. One girl in the hub lab often persuaded her mom to let her attend remotely instead of in person, Mrs. Ramoutarsingh said, with the result that she often didn’t show up after lunch, when the math lessons took place.

The district is planning to use its federal relief money to help students who are behind catch up over the summer and next year.

It is offering more seats in summer school than ever before. Beginning in the summer, the district will use new math and reading assessments that can be done in roughly 20 minutes on a computer to identify where students have gaps in their skills.

Meanwhile, it is hiring dozens of part-time reading and math tutors who can work with students individually or in small groups to target those gaps. At several elementary schools, including Witchcraft Heights, the district will expand after-school programming to make time for these interventions.

In line with state guidance, Salem does not plan to offer families a fully remote learning option next year, outside of limited medical situations.

Looking back on this school year, Mrs. Ramoutarsingh described it as both rewarding and taxing. She spent so much time in her home office creating Google slide decks for remote or hybrid lessons, she had little idea what her own children were doing in their remote schoolwork.

One issue really cut deep: the chatter, particularly on social media, that children had had a “lost year.”

“It’s hurtful, because I feel like it dismisses all of the work teachers have put into this year, and I think it’s damaging to the kids if they were to hear that narrative,” she said.

Instead, she has tried more than ever to recognize when her students make progress.

In early April, a student named Jorgelis, whose first language was Spanish and who had been in the hub lab for high-priority students, had scored an 88 percent on a test on perimeter and area.

“When I was grading it, I just welled up,” Mrs. Ramoutarsingh said. “I was like, ‘We need to celebrate this.’”

She emailed Jorgelis’s English as a Second Language teacher and the math coach she had been working with. When Jorgelis arrived in the morning, they were already in Mrs. Ramoutarsingh’s classroom, and the test was on Jorgelis’s desk. After Jorgelis got settled, in, the teachers rushed over to her desk and congratulated her.

“She was like, ‘Wait, I did this?’ and I said, ‘You did this!’ and I started crying,” Mrs. Ramoutarsingh said later. “And the other teachers were crying and the other kids were like, ‘Mrs. Singh is crying!’”

She added: “I’ve just really never been prouder to be an educator.”