Weather: A sunny start, with a high of 49, then clouding up, with rain overnight and much of tomorrow.

My name is Azi (pronounced AH-zee). I used to report for The Queens Tribune, The New York Observer, WNYC, and Politico before joining The Times last month as the new New York Today reporter.

I grew up here, live here, got married in a comic book store here and am relentlessly curious about our glorious and, at times, maddening city.

You’ll also notice that we’re giving New York Today a redesign, in hopes of making our newsletter even more helpful as you begin your day.

Consider New York Today a running conversation about what is, and is not, working in New York.

Here are some of the big themes I’m going to explore in this space:

Politics: Democrats have taken complete control of New York State government for the first time in a while. That is going to affect a wide array of issues, from charter schools to rent regulation to the legalization of recreational marijuana. We’ll be following along closely.

Transportation: How people move — by car or bus, on trains, scooters, over bridges and all across our city — is obviously of vital importance. The subways (and mass transit in general) are the veins and arteries of New York. If they’re clogged, we’re in trouble.

Information: How we get news, the shrinking of local journalism, and the vast expansion of Google, Facebook and Twitter are changing how we relate to those around us.

I’m hoping that New York Today can help you to navigate this landscape.

I have a lot of opinions about not wasting your time and the value of local journalism, which you can read about in my article for The Columbia Journalism Review.

Culture/Identity: How we talk about race, class, gender and other forms of identity in New York is changing. We’re going to pick up and discuss some of those stories, from myriad perspectives.

What do you want to see in New York Today? Email me at [email protected]

2. The city’s next public advocate

The opening: The current New York City public advocate, Letitia James, who was elected state attorney general on Tuesday, will start her new job in January.

A special election to fill her public advocate position will take place in February. But many prospective candidates have already started their campaigns.

The field: Those who have declared include Jumaane Williams, the city councilman from Brooklyn who ran for lieutenant governor; Michael Blake, the assemblyman from the Bronx who is vice-chair of the national Democratic Party; and the activist Nomiki Konst.

Ms. Smalls, who served as a policy aide on Hillary Clinton’s presidential campaign, is a lawyer and lives in Manhattan.

Why it matters: This kind of race is unpredictable. Anybody can win. It will be the first citywide, nonpartisan election since the city revised its election rules in 1989. 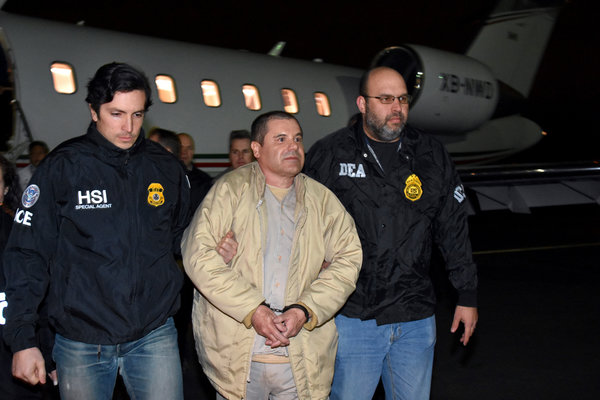 The Times’s Alan Feuer has a curtain-raiser on the case against Joaquín Guzmán Loera, known as El Chapo. It starts with a plane ride.

Even as the Mexican police jet started its descent into Long Island, Joaquín Guzmán Loera had no idea where he was going….

But as an airport glimmered on the ground outside his window, Mr. Guzmán — shackled, handcuffed and in the care of two American law enforcement agents — anxiously asked where he was being was taken, according to a person briefed on the trip.

“Bienvenido á New York,” one of the Americans said.

El Chapo terrorized his native Mexico for decades. So why is he being tried in Brooklyn?

“The Brooklyn indictment, originally filed in 2009, stems from a series of obscure contract killings that occurred in New York in the early 1990s,” Alan writes.

“…the election on Tuesday strongly suggested that the golden era of charter schools is over in New York. The insurgent Democrats who were at the forefront of the party’s successful effort to take over the State Senate have repeatedly expressed hostility to the movement.

…it seems highly likely that a New York Legislature entirely under Democratic control will restrict the number of new charter schools that can open, and tighten regulations on existing ones.”

The Times’s Tyler Pager has a dispatch from this year’s parade.

Catch up: In an interview last week, Alexandria Ocasio-Cortez told me, “I have three months without a salary before I’m a member of Congress. So, how do I get an apartment? Those little things are very real.”

Those comments went viral. Supporters began offering to help out. She asked them to instead donate to a local housing charity. Ms. Ocasio-Cortez, 29, a Democrat who represents a district in Queens and the Bronx, is the youngest woman to be elected to the House.

Additional info: Ms. Ocasio-Cortez has been drawing a salary from her campaign — nearly $5,000, according to election records, which is permitted under campaign finance rules. Her three months without a salary started after Election Day, when her campaign ended, a spokesman said.

The fallout: Besides receiving the support, Ms. Ocasio-Cortez has also been sparring with Fox News.

Xavier’s mother, Janet Guillen, of Inwood, said she has been out of work because of the demands of caring for Xavier.

She had been working at a grocery store when she found out she was pregnant.

“I never thought I was going to have a kid,” she said. “At 38 — what? Nah. It’s too late for me.” After seeing specialists, Ms. Guillen learned her son had autism.

Xavier now attends the Kennedy Children’s Center, an affiliate of Catholic Charities that specializes in preschool for children with developmental issues.

Online: a GoFundMe page for the Times’s Neediest Case Fund;

About the Neediest Cases Fund: These stories, which are outside The Times’s paywall, “demonstrate the impact that even relatively small amounts of money can mean for people facing difficult circumstances,” a spokeswoman for the paper said.

8. What else is happening …

Two cities: … And Amazon, owned by the world’s richest man, wants to move next door to the Queensbridge Houses, the nation’s largest housing project. Residents there worry they’ll be left behind. [New York Times]

Why the long lines to vote: Elections in New York are poorly run because of structural problems with the city Board of Elections, election laws in the state, and poorly trained staff. [Gotham Gazette]

It no longer appears in New York Today. But you can find it here. And we’ll have plenty of tales of life in the city in the newsletter.

Check out the going-out guides from The Times’s culture pages.

“We kind of noticed that we were close to the same number in birds, somewhere around June, or July,” he told me. “I think we were at the same number.”

Then, “I went up on him and I posted on Twitter. So, he went out to the coast and got a few birds up on me and he replied back to me, with his numbers.”

Thus began the great Birder Competition of 2018, starring two brothers from the South Bronx, each vying to see more species of birds.

The rules: “Just see as much as you can,” Jeffrey Ward said. And of course, “Don’t lie.”

The competition: “As much as we want to win, we want each other to see as much as we can,” said Jeffrey Ward, 27 years old and a bird guide at the New York City Audubon.

“As mad as I am that I’m losing at the moment, I’m happy that he got to Texas and got so many new birds that he’s never seen before.”

Can Jeffrey catch up? “It’s possible. Anything is possible,” said Jason Ward, 31, an educator at Zoo Atlanta and a writer for the National Audubon Society.

Have a great Monday.

We’re experimenting with the format of New York Today. What would you like to see more (or less) of? Post a comment or email us: [email protected].