The Trump administration is rolling out sweeping changes to the test immigrants must take to become United States citizens, injecting hints of conservative philosophy and making the test harder for many learners of the English language.

The new citizenship test that went into effect on Tuesday is longer than before, with applicants now required to answer 12 out of 20 questions correctly instead of six out of 10. It is also more complex, eliminating simple geography and adding dozens of possible questions, some nuanced and involving complex phrasing, that could trip up applicants who do not consider them carefully.

Of the 18 questions removed from the previous test, 11 were questions that had simple, sometimes one-word answers.

The new test adds one more hurdle for immigrants who hope to become voting citizens, coming in the waning days of an administration that has imposed substantial new barriers to immigration and limits on the ability of those already in the country to aspire to legal residence and, eventually, naturalization.

One test question that has drawn particular scrutiny provides a new answer to the question, “Who does a U.S. Senator represent?” Previously, the answer was “all people of the state”; on the new test, it is “citizens” in the state.

Singled out for a new question is the 10th Amendment, which reserves to the states all powers not specifically granted to the federal government, a part of the Bill of Rights that is a favorite among conservatives questioning federal authority.

Another new question, “Why did the United States enter the Vietnam War?” has one answer that is considered correct: “to stop the spread of Communism.” The test does not take on the issue of the vehement protests or the huge death toll stemming from the war. 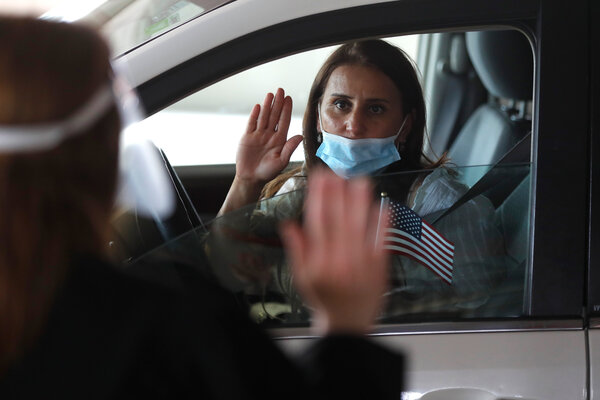 Immigration organizations, including some that have helped thousands of people complete their naturalization applications over the past decade, warn that the new test could make it harder for poor immigrants from non-English-speaking countries to become citizens and ultimately suppress the number of immigrants who vote.

Critics also said the new test could create even more backlogs in a system already plagued with delays.

“It’s a last-ditch effort on their way out the door for the administration to keep people from realizing their dreams of becoming citizens,” said Eric Cohen, executive director of the Immigrant Legal Resource Center in San Francisco, a nonprofit group that helps permanent residents apply for citizenship.

“There is no legal reason, no regulatory reason to do this,” said Mr. Cohen, noting that the citizenship test had remained unchanged since 2008. “They decided on their own that they have to change it for political reasons.”

Dan Hetlage, a spokesman for U.S. Citizenship and Immigration Services, the agency that oversees the naturalization process, said in a statement that the test was revised “to ensure that it remains an instrument that comprehensively assesses applicants’ knowledge of American history, government and values and supports assimilation.”

President-elect Joseph R. Biden Jr. has the option of reversing the changes, though that likely could not occur, if at all, until several months into the new year.

The new test will be required of all applicants who apply for citizenship after Dec. 1, though there is often a lag of several months between when candidates apply and when they are scheduled for an interview with a U.S.C.I.S. officer, meaning that some candidates may still be taking the old test.

The current pass rate for the citizenship test, according to U.S.C.I.S., is 91 percent. An analysis of the new test by the Catholic Legal Immigration Network suggested that 40 questions out of the original 100 remained unchanged from the previous version; the rest were reworded or newly introduced.

Already, some immigrants were expressing nervousness about changes to the test.

Nefi Reyes, an electrician from El Salvador who took the earlier test this year, passed with a perfect score. It had been 30 years since he had crossed the border into the United States to escape the civil war in El Salvador, and he voted in the United States for the first time in November.

“I feel lucky that I got it done,” Mr. Reyes said of the changes to the test. He had had difficulty memorizing the names of the colonies, he said, and the new test requires applicants to name not three of the original 13 states, as he had managed to do, but five.

Luz Gallegos, executive director of Todec, a nonprofit group that assists immigrants in Southern California, said her organization had seen a rush in immigrants applying to take the citizenship test, not only so they could vote in the November election, but because many hoped to avoid the new test. “As it is, it’s difficult for them to memorize all the answers to the civics test,” she said.

Immigrants are not alone in finding the citizenship test, even in its previous form, challenging. About one in three Americans could pass a multiple-choice test consisting of items taken from that version, according to a 2018 national survey by the Woodrow Wilson National Fellowship Foundation. Most of the respondents did not know how many justices serve on the Supreme Court or which countries the United States fought in World War II.

Citizenship tests have gone through various incarnations since being introduced around a century ago, replacing an earlier system, broadly criticized at the time, in which naturalization judges evaluated immigrants’ knowledge of civics and the English language as they saw fit.

“There was absolutely inconsistency and unfairness in the way that prospective citizens were examined by naturalization judges,” said Jack Schneider, an assistant professor of education at the University of Massachusetts, Lowell, noting that such hearings resulted in the rejection of large numbers of applicants.

The test has changed considerably over time. Decades ago, the test asked how tall the Bunker Hill Monument is, missing, critics said, the more important issue of what it stands for. Another question, “How many stars are there on a quarter?” was deleted after it was noted that the right answer depended on the quarter.

The new citizenship test is one of a number of moves made under the Trump administration to not only halt unauthorized immigration but restrict legal immigration as well. The administration has made it harder for people to obtain asylum, increased the costs of applying for citizenship and, under the cloak of the coronavirus pandemic, suspended the issuance of green cards to immigrants seeking temporary work in the country.

Taken together, these moves amount to a break from what historically had been bipartisan support for naturalization for immigrants who lived and worked in the United States and embraced the opportunity to become citizens.

Applicants must already fill out a 20-page application, pass background checks, submit a bevy of documents and pass civics and English tests during an interview. The government moved this year to raise fees for naturalization from $725 to $1,170, or $1,160 if the application was filed online, but a federal judge in California blocked the increase in September.

Organizations that offer citizenship classes to help immigrants study for the test are scrambling to revamp their lesson plans to respond to the new questions.

Lynne Weintraub, who trains citizenship instructors and was involved in the design of the 2008 test, said the revisions were adopted without outside professional input that might have helped ensure that the test was a fair and valid measure of applicants’ knowledge of civics.

“You can’t even imagine the turmoil that this has created,” Ms. Weintraub said. The new test, she said, presents additional problems for many English language learners by clustering abstract concepts into one phrase in some questions, “making them impossible for immigrants with low English proficiency and less education to follow.”