New Public Spaces Are Supposed to Be for All. The Reality Is More Complicated.

Office workers sip coffee beside men sleeping in chairs pulled together. Tourists park their shopping bags where people shoot up heroin, or drink until they pass out. Panhandlers go table to table seeking handouts. Piles of trash, used needles and worse (human feces) have drawn complaints.

This is a scene from the heart of Manhattan, where a painstaking effort to ban cars and carve a public plaza out of one of New York City’s most famous streets — with birch trees, cafe-style tables and original artwork — have collided with stark socioeconomic realities.

An opioid epidemic has left some addicted and desperate. Others with mental illnesses are not getting the help they need. And of the more than 60,000 homeless people in New York, at least 3,000 live on the streets.

The plaza along Broadway, a few blocks south of Times Square, has become a haven for people struggling with all of those issues.

What is happening in Midtown Manhattan underscores the challenges in New York and many other American cities of creating public spaces that, by definition, are open to all and a cornerstone of urban life, especially in space-starved communities. From pocket-size parks to plazas on reclaimed roadways to sidewalks dressed up with sleek benches and kiosks, the spaces make concrete-and-asphalt grids more inviting.

But as these public spaces have proliferated, they have also become testing grounds for what is acceptable — and unacceptable — public behavior. Cities including Honolulu, San Francisco, Colorado Springs and Charleston, S.C., have passed laws or regulations against sitting or lying down on sidewalks. Some cities have banned people from camping or even sleeping in public spaces.

“This is a big issue for the people who manage public spaces in virtually every city in the country, and depending on what the rules and laws are, it’s an almost intractable problem in most cases,” said Adrian Benepe, a senior vice president for the Trust for Public Land, and a former New York City parks commissioner.

Many city and business leaders say setting basic rules of conduct helps ensure that public spaces can be enjoyed by everyone and addresses public health and safety concerns. Advocates for the homeless counter that such measures are unconstitutional, target the homeless and keep out people who have nowhere else to go.

“Are you going to tell me I can’t use a public space because I don’t have a home?’’ said Jason Flores, 30, who moved to New York from Philadelphia and sleeps in public areas because he has no money.

Mr. Benepe said that behavior in public spaces has to be regulated, but that cities “can’t criminalize homelessness and it’s a fine line.”

In a 2016 survey of 187 cities, the National Law Center on Homelessness and Poverty, a nonprofit advocacy group, found that 88 cities had passed laws or regulations that restricted sitting or lying down in public places, up from 58 cities a decade earlier. Similar bans restricted sleeping in public spaces in 84 cities and begging in public spaces in 164 cities. It is unclear, however, how much these are enforced.

“This is being driven by the growth of homelessness and the increasing public presence of people who are poor,” said Maria Foscarinis, the center’s executive director, who added that some laws have been successfully challenged in the courts. 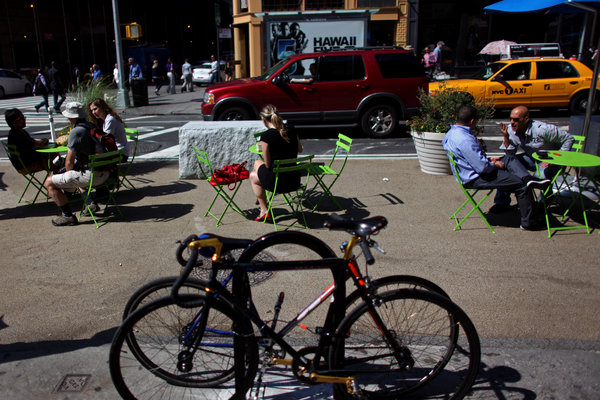 Laws trying to dictate behavior in public spaces, Ms. Foscarinis said, are a “kneejerk political reaction” that fail to address the underlying causes. She cited research showing that it would be more effective and less expensive to create affordable housing and provide social services than to enforce such laws.

Jerold S. Kayden, an urban planning professor at the Harvard University Graduate School of Design, said that as long as there have been public spaces, there have been tensions over who used them, and how. The agora in ancient Greece — a space for assembly celebrated for its debates — was originally only open to “citizens,” Mr. Kayden said, in effect excluding “people not considered worthy of public space.”

“Public space has always been part of being human,” he added. “But that’s the challenge: What expression of humanity is acceptable?”

Mr. Flores said security officers and others wake him up — sometimes three or four times a night — and tell him to move on. “It’s like being kicked when you’re down,” he said. “It’s not fair.”

But also unfair, others said, is having public spaces taken over by those seeking a place to sleep or making it harder for others to use.

Constantine Obelenus, 65, a messenger, recalled not having a place to sit with a cup of coffee in a park near his home in Elmhurst, Queens, because the benches were taken by people sleeping. “What’s the space for?” he said. “Everybody.”

Sidewalks have become contentious as well. In Manhattan, residents of a Chelsea apartment building have cleaned mounds of trash, rotting food, urine in juice bottles, feces and used needles left outside their door by people who camp out on the pavement.

Mark Goldey, 49, a lawyer who lives in the building, said the LinkNYC kiosks, which offer free internet access, at either end of his block are another problem because people sprawl out around them with their stuff and block foot traffic.

New York City has long had rules for how public spaces are to be used. Some of the most stringent apply to city parks and playgrounds, where more than three dozen rules prohibit a range of conduct, such as disorderly behavior, urinating, defecating, fighting, spitting, lying down on benches, camping without a permit and not picking up after dogs.

Park officers handed out 1,820 tickets for all violations through August, compared with 1,850 all of last year.

Other public spaces resort to creative ways of curbing unwanted behavior. Metal dividers are added to benches to keep people from lying down. Bryant Park in Midtown Manhattan is “programmed within an inch of its life”— festivals, readings, ice-skating — to bring in crowds that leave little room for illicit uses, said Dan Biederman, the president of the Bryant Park Corporation, which manages the park.

But sidewalks and streets were never intended as gathering places. That changed when pedestrian plazas were carved out of streets. In 2016, New York City’s Department of Transportation adopted rules for its pedestrian plazas — 59 are open, 18 more are on the way — after complaints of costumed Elmos and other vendors aggressively seeking tips in the Times Square plaza.

The rules are now posted in every plaza, but are often ignored or flouted, according to plaza managers and others. Because plazas — unlike parks — never close, they can be an open invitation for misconduct and there are no dedicated officers to enforce the rules, they said. The police have to be called.

After a sprawling Bronx plaza opened in 2016, homeless people and others sought refuge there, bringing mattresses and suitcases. Drug use is also common there.

“You just have this open space inviting people to do whatever they want,” said Wilma Alonso, the executive director of the Fordham Road Business Improvement District. “It has so much potential that when it’s empty and underutilized, it hurts.”

Just south of there, in a popular South Bronx shopping district known as the Hub, at least 50 people at any time — or more than three times as many as a year ago — sleep or camp out in public spaces, including a recently opened plaza, said Michael Brady, the executive director of the Third Avenue Business Improvement District. Mr. Brady said his staff and local business owners have learned to give a nasal spray used to treat overdoses.

Under state law, homeless people cannot be forcibly removed from the streets unless they pose a threat to themselves or others. City officials said they have significantly expanded outreach efforts and programs for the homeless. They said they have helped nearly 2,000 people voluntarily leave the streets for shelters and permanent housing since 2016.

The Broadway plaza is the largest public space in Manhattan’s garment district, a dense neighborhood where factories have been replaced with offices, restaurants, hotels and apartments. At night, as many as two dozen people sleep on the plaza where festive white lights will soon be strung for the holidays and silver tables and chairs offer — weather permitting — al fresco dining amid skyscrapers.

Several men said they felt safe there, with the huge planters of juniper and Japanese holly offering shelter from the cold. J.R., 36, who declined to give his full name, said he was homeless and slept there only at night when office workers were not around.

In the daytime, he said, he tries not to bother anyone. “Everyone should try to be fair with each other,” he said. “You have to share the space.”

But other people argue and fight in the plaza, according to workers for the Garment District Alliance, which maintains the plaza. These workers say they have seen people use and sell drugs, and urinate on the plants. One rowdy group recently pelted passers-by with batteries, they said.

Min Park, the manager of Cook Eatery, said some people from the plaza have grabbed food from the deli’s buffet table without paying. Or they have asked customers for money. “I’m constantly chasing them out,” he said.

Barbara A. Blair, the alliance’s president, has stationed security guards around the plaza to try to keep the peace. She once posted signs asking people not to give money to panhandlers on the plaza. The signs were ripped down. She got emails accusing her of being heartless.

At 5 a.m. on a recent day, Ms. Blair accompanied security officers as they woke people sleeping on the plaza to tell them that it was being cleaned. Outreach workers with Urban Pathways, a nonprofit, offered support services and a place for them to stay. Then six cleaners came with power hoses and disinfectant.

“We love our plaza,” Ms. Blair said. “But we’re struggling with homelessness and antisocial behavior in these public spaces.”