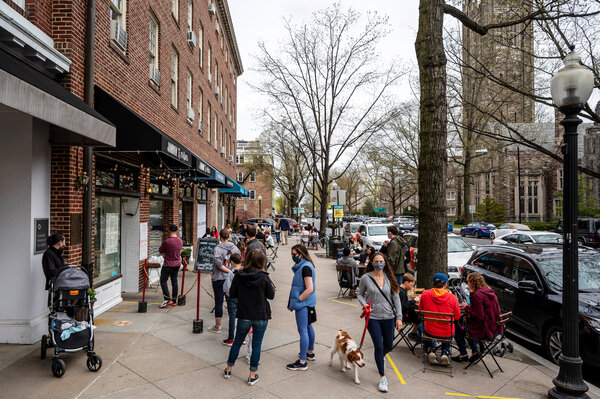 By Michael Gold and Dan Levin

New coronavirus cases have fallen drastically in New Jersey, where at times this spring the virus was spreading faster than anywhere else in the United States.

Over the past two weeks, the state has seen its average number of new daily drop by 61 percent, according to a New York Times database.

New Jersey’s case numbers are dropping along with the rest of the country’s. But the state’s decline is the steepest in the United States and its rate of new daily cases per person is now just above the national average.

“Clearly vaccinations are playing a role in this,” said Dr. Edward Lifshitz, medical director of the New Jersey Department of Health Communicable Disease Service, although he warned that while cases are declining, they are still higher than the number of infections in the state last summer. “It certainly is too early to declare victory,” he said.

Behind New Jersey is neighboring New York, with a 48 percent decline, and Michigan, which despite a 41 percent drop still has the highest rate of new cases in the country. In Puerto Rico, cases are also down 61 percent.

The steady decline in New Jersey comes as the state prepares for a broad reopening on May 19, when it will lift almost all of its remaining virus restrictions, including most capacity limits.

Mr. Murphy has cited the state’s rising vaccination rates as the cause of the reopening. As of Friday morning, more than 3.4 million New Jersey residents had been vaccinated, according to state health data.

Mr. Murphy has set a goal of fully vaccinating 4.7 million adult residents by the end of June.

As of Friday, 40 percent of the state’s adult population was fully vaccinated and 54 percent had received at least one dose, according to a New York Times database, outpacing the nation as a whole.

But as the demand for vaccines wanes, New Jersey has joined other states and cities in turning to an array of not-so-subtle incentives to get shots into the arms of more residents. Residents who get their first vaccine dose in May are eligible for a “shot and a beer” at participating breweries in the state.