[Want to get New York Today by email? Here's the sign-up.]

Weather: Drippy this morning, with some wet snow north and west of the city. Damp all day with a high of 46.

Alternate-side parking: in effect until Jan. 21. 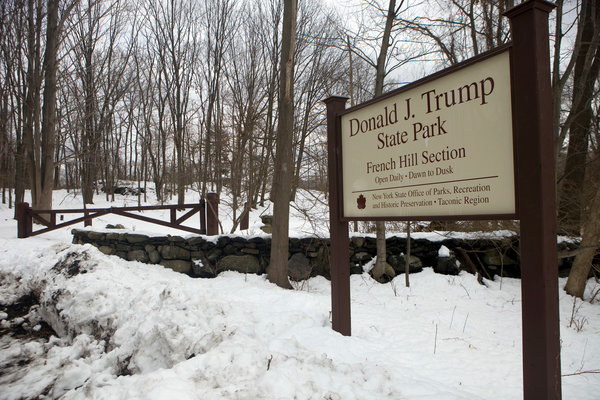 You may have heard about all the new laws Democrats in New York hope to pass now that they control both houses of the State Legislature.

My colleagues have a story looking at other major issues Mr. Cuomo or his Democratic colleagues plan to tackle, such as school and subway funding and single-payer health care.

But there are a lot of bills that never really had a chance of passing when Democrats controlled only the Assembly, and Republicans held the State Senate.

One example: removing President Trump’s name from a state park in Westchester and Putnam Counties.

“That’s something I wanted to get done but obviously couldn’t,” said Nily Rozic, a Democratic assemblywoman from Queens. “Now we have no excuse, right?”

She also plans to reintroduce legislation to incarcerate inmates near their children, which supporters say helps keep families intact and reduce recidivism.

Maritza Davila, an assemblywoman from Brooklyn, sponsored a bill to help transgender inmates get into safer housing. It passed the Assembly but did not make it past the State Senate. She said the bill would have a better shot this year.

Amy Paulin, an assemblywoman from Westchester County, sponsored a bill last year to extend the waiting period for gun buyers from three days to 10 for those whose background checks are not immediately approved or rejected.

She is introducing a new bill this session that goes further, extending that waiting period to 30 days. And she wants a mandatory three-day waiting period on all gun purchases.

“We have an opportunity in New York with both houses being Democrat to pass a stronger bill,” Ms. Paulin said.

Anthony D’Urso, an assemblyman from Long Island who last year introduced a bill to increase fines for dumping snow in handicapped parking spaces, said that he, too, will introduce some bolder pieces of legislation this year: extending legislative terms, publicly funding campaigns and closing a loophole that essentially guts campaign contribution limits.

Or, as Mr. D’Urso put it: “This year I’m going to put some people to the test, to see if they’re all talk and no action.”

Best of The Times

A $33 minimum wage? How new salary standards change the fortunes of workers in one of the most expensive cities on earth is the million dollar question.

Is the L train fix too good to be true? Critics are calling it a temporary and risky solution.

Drama on, and off, the stage: Broadway actors are pushing for profit-sharing in the creation of shows.

Five apartments in four years: How a young man from Alabama found a home in East Harlem.

Organic, and in Brooklyn: Thai Farm Kitchen is committed to honoring the connection between land and table, our critic discovered.

Stabbed in the back: A subway rider was attacked in the Bronx after refusing to give a stranger $10 … [NBC New York]

Health stampede: Thanks to all those New Year’s resolutions, lines are insane at salad shops in Midtown. [New York Post]

Brooklyn’s first medical marijuana dispensary: “Looks like it could be a tranquil spa.” [Time Out New York]

$80 an hour, to cuddle: A “trained cuddlist” from Connecticut says, “People are very much deprived of touch.” [CTPost.com]

Stat of the day: 37 percent

According to studies, crime witnesses who viewed mug shot lineups that included innocent “fillers” identified the wrong person about 37 percent of the time.

My colleague Joseph Goldstein has a story about the New York Police Department’s use of more open-ended mug shot searches — which have few safeguards against false identification, and which police in many cities no longer use.

“Her Perspective,” a panel discussion with female photographers at Freehold in Williamsburg. 6:30 p.m. [$15]

Gather the family for a tour of “Charles White: A Retrospective” at the MoMA, hosted by Thurgood Marshall Academy Lower School. Refreshments will be served. 5:30 p.m. [Free]

A discussion on the legacies of Harriet Tubman and Frederick Douglass at the Walls-Ortiz Gallery in Harlem. 6 p.m. [Free]

Events are subject to change, so double-check before heading out. For more events, see the going-out guides from The Times’s culture pages.

And finally: What to do with your Christmas tree

First, make sure you got all the gifts that may be hidden underneath.

After that, you have a few choices.

If you don’t mind leaving your tree on the curb: You have until this Saturday, Jan. 12. That is the last day the city’s Sanitation Department will collect Christmas trees left on the street. Make sure to take off all the ornaments.

What happens to the trees left on the curb? They get chopped up into tiny little pieces. You may be familiar with the process if you saw the movie “Fargo.” Anyway, that chipping turns trees into healthy compost, which the city uses in parks and community gardens.

Want to keep the green stuff for yourself? You’re in luck. The city’s “Chipping Weekend” takes place this Saturday and Sunday, Jan. 12-13, from 10 a.m. to 2 p.m. See location list.

What if you have an artificial tree? You can donate it. This city website has information on how. Or keep it in your living room and tell people it’s a Valentine’s Day tree. If anyone asks, tell them you read about it in a New York Times newsletter, so it must be real.

It was a Monday night in June 1953. I was at the Martin Beck Theater, now the Al Hirschfeld, where Arthur Miller’s “The Crucible” was struggling to survive

The play was ostensibly about the Salem witch trials, but I suspected that it was also about another witch hunt that was going on at the time involving people accused of writing the wrong scripts, subscribing to the wrong publications, marching in the wrong parades, attending the wrong rallies or supporting the wrong causes.

Afterward, I waited for Arthur Kennedy, who played the doomed John Proctor. He obliged with an autograph, and then asked if I was a “college kid.”

“I guess you understood it,” he said.

We’re experimenting with the format of New York Today. What would you like to see more (or less) of? Post a comment or email us: [email protected].