N.Y.C. Roads Are Busy Again, and So Are Traffic Reporters

Buzzing over New York City in a traffic helicopter on a morning in March of last year, Tom Kaminski, a radio traffic reporter for more than three decades, looked down at the rush hour commute. He gasped.

For one of the few times in his career at WCBS Newsradio 880, he said, there was no rush hour, at all.

The pandemic has stolen countless things from New York: loved ones, thousands of jobs and our very sense of security. But the stay-at-home orders designed to stop a viral spread for months also evaporated some of the more vexatious things city dwellers endure, including snarls of slow-moving tourists, long lines for MetroCard vending machines and, perhaps most notably, traffic.

Quiet streets became a symbol of a city on life-support, crisscrossed by ambulances and the occasional illicit drag race.

But traffic has roared back as Memorial Day approaches. On Thursday, 970,920 drivers traveled through city tolls, a high not seen since before the pandemic, and about 96 percent of that day’s traffic during a normal year, according to the Metropolitan Transportation Authority.

Traffic on Memorial Day feels as much of a holiday tradition as burning a Yule Log on Christmas. This year, perhaps no one has a better front-row seat to a dramatic change taking place on the streets, highways and byways of the city, than reporters like Mr. Kaminski. By nearly every measure, vehicle volume has returned to nearly prepandemic heights, a trend seen nationwide.

For city residents seeking signs of a return to normalcy, there may be something weirdly soothing in once again hearing the urban birdsong of car honks and the angry curses from drivers. Perhaps there’s even a perverse pleasure for New Yorkers in returning to a familiar resting state of aggravation. 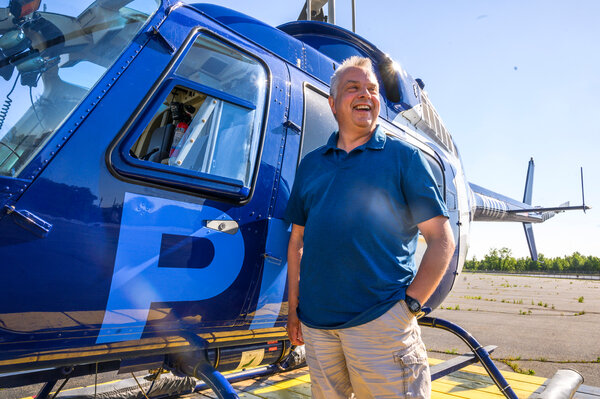 At the height of the pandemic, city buses whizzed through the emptied city at 9.2 miles per hour on average, according to the transportation authority; as of April, the last month for which numbers are available, they’ve returned to their prepandemic velocity of 8.2 miles per hour.

On Friday, traffic was already piling up. “It is really miserable,” Karen Stewart, a traffic reporter for 1010 WINS, said on air, before rattling off a list of delays. She ended her report with one word: “Whew!”

Carol D’Auria, the news anchor, seemed taken aback by the jams. “You said it, Karen: ‘Whew!’

In April of last year, just under 10 million vehicles passed through tolls on city bridges and tunnels, a nearly 65 percent drop from normal, according to the transportation authority; this month, preliminary data shows traffic volume on track to be within 10 percent of normal.

But traffic patterns look different, and a new normal is emerging, according to interviews with several traffic reporters.

With many people still working from home or moving to hybrid work, morning rush hour starts later, only ramping up at around 9 a.m. The evening rush now begins at about 3 p.m. And with subway ridership still hovering at less than half its prepandemic level, and many people shifting to cars, transit reporters say that the city’s streets are now mired in traffic that lasts all day.

The change in road dynamics has presented anchors with a challenge, sometimes an existential one: “Now traffic is so hard to predict,” said Jamie Stelter, a traffic anchor for Spectrum News NY1 for the past 11 years. “You used to know the patterns — any New Yorker knows the patterns — so you felt like you were useful.”

With little happening on the roadways as the pandemic dragged on last year, reporters wondered what they would say on air, said Tairy Ynoa, a traffic and weather anchor for Telemundo 47. “It was insane,” she said. “It was, ‘How am I going to make this dynamic? What am I going to tell my people?’”

Ms. Ynoa, who began broadcasting from home in March of last year, shifted her report primarily to giving updates regarding the subways and trains. Her segments focused on the many service suspensions at that time affecting mass transit, in an effort to inform essential workers like health care workers and grocery store employees who were still going to work in person, and who make up much of Telemundo’s viewership.

“I had to reinvent myself and start to focus more on the people who had to go out and work for us, because we were home,” Ms. Ynoa said.

Peering from his traffic helicopter at the empty roads during the pandemic has been painful, said Mr. Kaminski. “It’s the greatest city in the world, I’ve had the privilege of flying over it and around it for 32 years, and when you see such a decline, when the patient is on the table and the pulse is disappearing, you get worried,” he said.

With empty streets inviting speeding, the crashes to report on seemed uglier than usual, several traffic reporters said. There have been 25 more pedestrian fatalities to date in 2021 than there were by this time last year, according to the city’s Department of Transportation, and a 50 percent increase in overall traffic fatalities.

Throughout the darkest days of the pandemic, Lauren Scala, a traffic reporter on “NBC 4 New York,” said she received fan mail from grateful viewers.

“Even though they knew there wasn’t as much for us to talk about, they were so thankful that we were still there, and part of their morning,” Ms. Scala said. “It was a really positive response — which was nice, because you’re like, ‘Am I useless now?’”

When there was no traffic to report on, anchors with the Total Traffic & Weather Network gave information on where to find food banks and drive-through coronavirus testing centers, and reported on wait times. As protests spread throughout the city last summer, Kelly Dillon, a traffic reporter with 1010 WINS, pivoted to reporting on streets blocked by demonstrators.

Starting on March 20, 2020, Spectrum News NY1 dialed back its rail and road traffic report, leading Ms. Stelter to briefly have anxiety about her professional future. Ms. Stelter switched to feature and news reporting, a silver lining in a dark time that she said allowed her to expand her skill set. The traffic report was restored in June, she said.

In May, as traffic backed up along all the Hudson River crossings, NBC displayed a graphic during Ms. Scala’s traffic report depicting delays on the road: 25 minutes at the Holland Tunnel; 25 minutes at the George Washington Bridge. It was the type of notice that hadn’t been used in over a year.