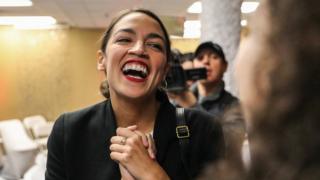 The youngest woman ever elected to Congress has a problem – she can’t afford her rent. That is until she starts her new job in January.

After telling the New York Times she’s waiting for her first paycheck before renting an apartment in Washington DC, Alexandria Ocasio-Cortez is again being called the “millennial Congresswoman”.

Ms Ocasio-Cortez responded on Twitter, pointing out the clothes were loaned to her for the photo shoot.

Her comments, “I’ve really been just kind of squirreling away and then hoping that gets me to January,” got many on Twitter empathising with her.

“Alexandria Ocasio-Cortez not being able to afford DC rent is the most millennial things ever and I honestly vibe with it,” tweeted one user.

Ms Ocasio-Cortez joins Republican Elise Stefanik, 34, and newly-elected Democrat Ilhan Omar, 36, amongst others, in the “millennial caucus” in Congress.

She was elected to New York’s 14th congressional district, after running a progressive campaign that focussed on issues like poverty, wealth inequality and immigration.

Born in the Bronx to Puerto Rican parents, she describes herself as working-class and worked in restaurants until early 2018 to supplement her salary as a community activist.

“For 80% of this campaign, I operated out of a paper grocery bag hidden behind that bar,” she told Bon Appetit magazine.

On Thursday she tweeted that her accommodation dilemma also demonstrates how the American electoral system “isn’t designed for working-class people to lead”.

Others on Twitter agreed: “Goes to show how divorced the system and most elected officials are from normal people that a normal person can’t readily begin to serve without starting out wealthy,” wrote one.

“That’s reality for a lot of people. Will be nice to have someone in Congress that literally understands the struggle,” commented @Lauralouisiana.

More on this story:

More women than ever before won seats in Congress in the 2018 mid-terms.

What does it mean for Congress – and America?

But Ms Ocasio-Cortez isn’t the first lawmaker coming to Congress to make waves about the high rent in the city.

Washington DC regularly features in the list of top 10 most expensive cities to rent. A one-bedroom apartment costs about$2,160 per month, according to Business Insider.

One in five children in the district live in a household that is extremely low-income and lacks an affordable home.

Housing affordability is an issue nationwide. More than 38 million households struggle to afford their housing, one Harvard report found.

Members of Congress are paid $174,000, but many cite the need to maintain a home in their congressional district in addition to Washington as a reason for their financial hardship.

In 2015 Representative Kristi Noem told NPR that she sleeps on a pullout bed in her Capitol Hill office when Congress is in session.

The ‘couch caucus’ has made headlines over the years in its criticisms of the unaffordability of Washington, including outgoing House Speaker Paul Ryan, who says he slept in his office for years.

Estimates have put the number of politicians snoozing where they work at between 40 and 50.

In May legislation banning the practice was proposed in the House of Representatives, and suggested that lawmakers should receive tax deductions for their living expenses while in Washington.

Some get around the problem by finding housemates.

One famous house-share saw numerous Democrats coming and going over the years, including senators Richard Durbin and Charles Schumer, and became the topic of the 2013 TV series Alpha House about four fictional Republican politicians.

House-sharing into her thirties would certainly make the politician the bona fide millennial.