Michigan: The Democrats have reason to celebrate

The governor’s seat flipped from red to blue by a female challenger.

The Senate seat was retained by a female incumbent.

Rashida Tlaib from Michigan’s 13th district became one of the first Muslim women elected to Congress.

The 11th district changed hands from Republican to Democrat. 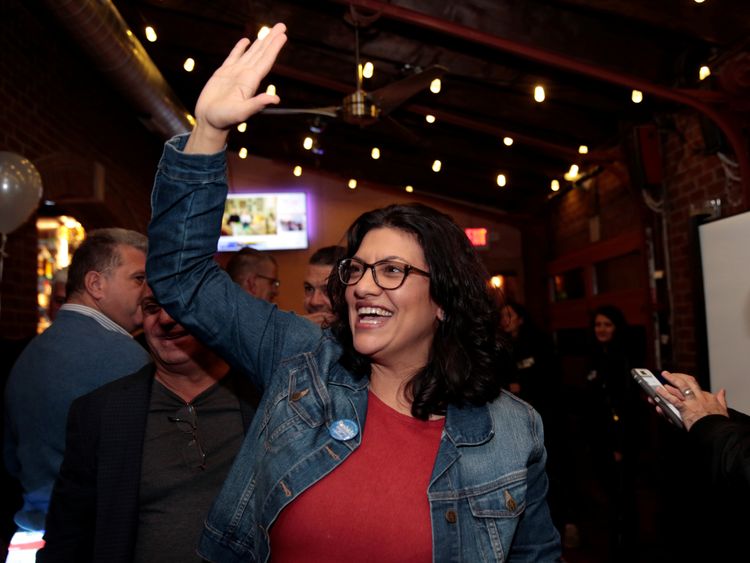 And In Michigan’s 8th congressional district, a first time candidate and former CIA analyst Elissa Slotkin won one of the most expensive and closest races in the country against an established Republican man.

Ms Slotkin’s messages on health care, common sense, public service and civility in public life resonated deeply with educated suburban women outside the state’s big cities, who rewarded her with a vote that sent a worrying message to Donald Trump.

At the buzzing victory party, Ms Slotkin’s spokesperson Laura Epstein told me: “Elissa believes that the tone and tenor of politics is unbecoming of a country she loves, and that the people in her district deserve better.”

The voter – by the tightest of margins – agreed.

At the Great Harvest Bread Company in Brighton, Michigan, they reflected on the reshaping of Congress.

“Right now I have a deep sense that we need a change.”

Baker Mac Hawes said: “We should be more unified, right now I’m a little embarrassed about what other countries think of us, to be honest.”

Customer Sherry Smith said she was delighted that part of Congress could finally act as a check and balance on the president.

She said: “I think Donald Trump is a tyrant.

“He is surrounded by yes men.”

But although nationally there were other successes, particularly with female candidates who ran and won in record numbers for the Democrats, there were other significant defeats in crucial states like Florida and Texas.

As both parties set their sights on 2020, for the Democratic Party there is still no clear formula for success.

It is faced with a tricky balancing act.

There are those who believe the path to reclaiming the White House in a divided country lies in stitching together a broad, progressive collation made up in part of young people, people of colour, women in the suburbs and the LGBTQ community.

But the midterms have also shown that using moderate candidates with a national security background who can reclaim the idea of patriotism and national identity for the left is very fertile territory for peeling away voters with buyer’s remorse over Donald Trump.

At the moment, it’s not immediately obvious that those two approaches mix fantastically well.

The midterms fire the starting gun for the next general election, and the Democrats haven’t got long to work out how to thread that needle.