Martha White, a Black housekeeper in Baton Rouge, La., was bone-weary coming home from work one day in 1953. As she climbed aboard a city bus, she saw only one seat left, in the “whites only” section at the front. She took it.

That simple act was a startling move in the Jim Crow South. She was thrown off the bus, prompting Black residents of the city, Louisiana’s capital, to mount a bus boycott. And that protest — which was settled by a partial desegregation of the city’s buses — would serve as the template for the bigger and more famous bus boycott in Montgomery, Ala., two and a half years later.

The Montgomery boycott — prompted by the refusal of Rosa Parks to give up her bus seat to a white man and organized by a young pastor named Martin Luther King Jr. — led to a landmark Supreme Court ruling that outlawed segregation on Alabama’s intrastate buses. It was one of the earliest and most consequential events of the civil rights movement.

By the time Ms. White died at 99 on Saturday at a nursing home in Baton Rouge, her role as the catalyst in the movement’s first large-scale bus boycott had long been overshadowed — at least on the national level — by the events in Montgomery. But the Baton Rouge boycott remains a milestone event in Louisiana.

“We can make the argument that none of the rest of that history happens without Martha White,” Eugene Collins, president of the Baton Rouge N.A.A.C.P., said in an interview.

On that June morning in 1953, when Ms. White, 31, sat in the off-limits seat, the bus driver, a white man, told her she could not sit there. She started to get up, but when other Black passengers in the rear of the bus laughed and mocked her for appearing to comply with the driver, she sat back down, according to Robin White Clark, a teacher and author of the 2020 book “The Baton Rouge Bus Boycott” (and no relation to Martha).

Another Black woman sat beside Ms. White in solidarity, at which point the driver threatened to have them arrested and called the police.

“It seemed like every police in town was there, and the head of the bus commission,” Ms. White told Southern Digest. “I vowed never to get back on the bus.”

The Rev. T.J. Jemison, who was pastor of the Mount Zion First Baptist Church in Baton Rouge and who would become part of the first generation of civil rights leaders, intervened on Ms. White’s behalf. He couldn’t stop her from being thrown off the bus, but he did keep her from being arrested.

Word of the incident spread quickly, and a radio announcement urged all Black residents to meet at a local high school to discuss how to respond. So many people turned out that a second venue was set up, at an athletic stadium. 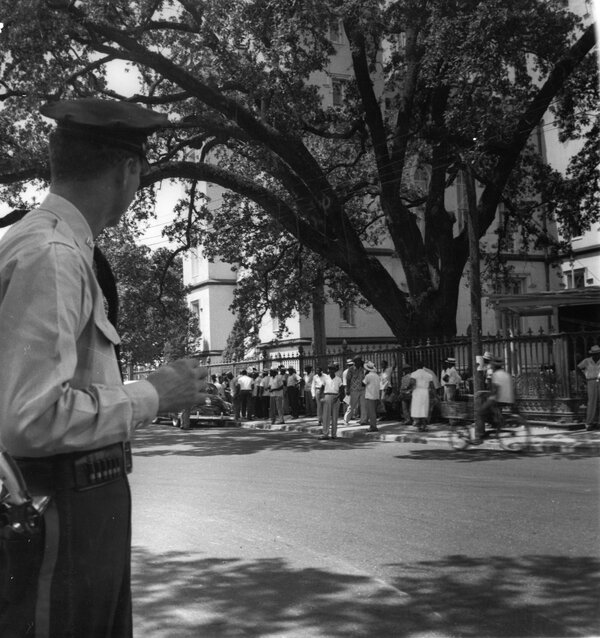 Johnnie A. Jones Sr., who would become a major civil rights activist in Louisiana, was fresh out of law school at the time and joined the protest. Black residents, led by Mr. Jemison, Mr. Jones and others, decided that if they were paying the same bus fare as white passengers but had to stand rather than sit in certain seats, they would boycott the city bus company, which received about 80 percent of its revenue from Black riders.

“They decided to do what we today would call a ride-share program,” Jason Roberts, curator of the Baton Rouge African American History Museum, said in a phone interview.

The ride shares were organized through the churches, with parishioners using their cars to take Black residents to and from their jobs. The churches passed collection plates to raise money for gas, Mr. Roberts said, and everyone pitched in, including the Black owner of an Esso station (a forerunner of Exxon-Mobile), who sold his gas at wholesale prices.

The boycott, which started on June 18, 1953, lasted eight days before the city, eager to stem the red ink, reached a compromise with some of the leaders. It set aside a few seats at the front of city buses for white passengers and a long bench seat in the back for Black passengers. The seats in between would be for everyone.

The compromise was a source of heated debate among Black residents and even some of the boycott leaders; critics said that it was a sellout and that the boycott should have gone on longer. Moreover, they said, the residents’ legal challenge to the removal of Ms. White from the bus should have been allowed to proceed through the courts, where they felt sure they would have won a historic ruling against the city. But once the compromise was reached, the legal case was dismissed.

Two years later, Dr. King visited Mr. Jemison’s Mount Zion Church to learn how the boycott had been organized. Ms. White was among those who sat in the pews to see him, one of her nephews, John Denman, said in an interview.

Dr. King would use some of the same tactics in Montgomery — organizing alternative transportation methods, involving the churches and keeping the protests nonviolent. That boycott, which lasted 381 days and ended with a triumphant court ruling, diverted attention from Baton Rouge.

But over time, various writings and theatrical productions, and especially a 2004 documentary by Louisiana Public Broadcasting called “Signpost to Freedom: The 1953 Baton Rouge Bus Boycott,” have reclaimed its place in history.

Martha White was born on April 2, 1922, in Woodville, Miss., in the southwest part of the state, one of seven children of Ephraim and Viola White, who were sharecroppers. Her mother died when Martha was in her early teens, and afterward her uncles brought her and some of her siblings to Baton Rouge. She later earned her high school equivalency diploma.

Ms. White had a brief marriage that ended in divorce and went to work as a housekeeper. With her wages, she was able to buy her own home in Baton Rouge, where she lived for most of the rest of her life.

In addition to Mr. Denman, she is survived by several other nieces and nephews. One of her siblings, Isaac White Sr., a barber, ran White’s Barber College in Mobile, Ala., and became a pillar of the community. He died in 2019.

Ms. White’s decision to sit in the white section of the bus had a lasting effect on the Baton Rouge Bus Company. Not only did it change the rules for passengers; it also eventually hired Black employees. Mr. Denman got a job there in 1966 and rose to manager before he retired after 43 years.

Some of her other relatives still work at the company, now called Capital Area Transit System, Mr. Denman said, adding, “Her bloodline is deep into that bus line.”