LOS ANGELES — From inside the walls of Folsom State Prison, the two inmates, one a convicted murderer, clinked their cups of prison moonshine in a toast to the new district attorney of Los Angeles, George Gascón.

A video of the celebration was released earlier this year by Mr. Gascón’s opponents — and there are many — who used it to attack what is perhaps the most far-reaching plank of his progressive agenda: the review of nearly 20,000 old prison sentences, many for violent crimes like murder, for possible early releases.

Mr. Gascón, a Democrat, has brushed off the video as nothing more than a Willie Horton-style attack by get-tough-on-crime proponents that “plays well on Fox News.” But he doesn’t shy away from his belief that even those convicted of violent crimes deserve a chance at redemption.

“There’s no way we can get to meaningful prison reduction in this country without looking at more serious crimes,” Mr. Gascón, who also supports ending cash bail and eliminating the prosecution of juveniles as adults, said in an interview. “The public stories you hear are the really scary stuff. You’re talking about the violent sexual predator. You’re talking about some sadistic murderer. The reality is those are really a small number of the prison population and violent crime.”

But the prospect of convicted murderers getting out early, or getting lighter sentences than they would have received in a previous era, has fueled an effort to force a recall election next year and remove Mr. Gascón from office. More than a thousand volunteers, as well as dozens of paid workers, are collecting signatures for the recall at gun stores, bail bonds offices, and even outside Mr. Gascón’s home. 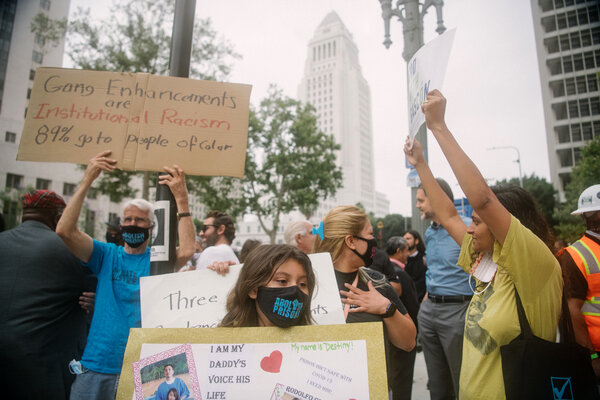 And inside courtrooms, some prosecutors who believe Mr. Gascón’s policies will harm public safety are openly working against him by attempting to sabotage his directives to pursue lesser sentences and not seek cash bail.

Mr. Gascón, 67, who was propelled into office by grass-roots activists in the aftermath of the police killing of George Floyd, is one of the nation’s most progressive prosecutors in one of America’s most liberal cities, and yet he is facing an intense backlash in enacting the sorts of policies demanded by protesters last year and aimed at reducing the vast racial disparities in arrests and prosecutions.

The pushback is a sign of the many challenges liberal district attorneys in big cities are facing, at a time when Republicans are increasingly trying to portray Democrats as soft on crime, amid a rise in gun violence and homicides across the nation that began during the pandemic and has continued into 2021. In Los Angeles, for instance, murders increased 36 percent last year.

Mr. Gascón’s approach, and whether he can be successful, is being closely watched by activists who have led a national movement in recent years to elect prosecutors who promise to send fewer people to prison. They achieved early victories in 2016 in St. Louis and Chicago, and earned another one the next year with the election of Larry Krasner, a former civil rights attorney, as the district attorney of Philadelphia. (Mr. Krasner, who shares many of Mr. Gascón’s views, recently cemented his power by winning the Democratic primary by an overwhelming margin, all but ensuring another term in office.) But their most important victory has been Mr. Gascón’s election in Los Angeles, because of its size and its history of high incarceration rates.

While in all of those places the newcomers faced intense resistance when they took office, perhaps none of them has faced as much pushback as Mr. Gascón, who has been hampered by Civil Service protections that largely prevent him from firing prosecutors and bringing in like-minded deputies.

The recall campaign is supported by high profile figures like Sheriff Alex Villanueva and Steve Cooley, a former Los Angeles district attorney, as well as some victims of crime, including Desiree Andrade, whose son was killed in 2018 when he was beaten and thrown from a cliff after a drug deal. Some of the men charged in her son’s killing now face lesser sentences under Mr. Gascón’s policies — but still face decades in prison — and Ms. Andrade, at a recent news conference, described Mr. Gascon as pushing a “radical, pro-criminal agenda.”

The recall push, which is funded in part by Geoff Palmer, a real estate developer and Republican megadonor who raised millions for former President Donald J. Trump, is still a long shot. Supporters need to collect nearly 600,000 signatures by late October to force a new election, and recalls are easy to start in California, but rarely lead to an officeholder’s ouster.

Mr. Gascón said the efforts against him reflect the polarization of America’s politics, and underscores that California, while deeply blue, is not monolithic. “We have some counties that you could pluck them up and put them in the middle of Texas or Arizona and you wouldn’t see the difference,” he said.

A Cuban émigré who moved to Los Angeles as a boy, Mr. Gascón started as a beat cop in South Los Angeles in the turbulent 1980s, a time of gang warfare and a crack epidemic. He went on to be the police chief in San Francisco, before being appointed district attorney there in 2011 to replace Kamala Harris, who had become California’s attorney general. He was elected to the job twice, and reduced the number of people San Francisco sent to state prison.

Mr. Gascón, who won the office from Ms. Lacey by a wide margin in November, speaks often about how, as an officer, he found himself locking up multiple generations of Black men from the same family. Over time, his views on crime and punishment changed, and he said he sees it as his job as district attorney to undo the damage of that time, especially for Black and Latino communities in Los Angeles.

“Those days continue to haunt me,” he said of his time as an officer, in his inauguration speech.

Mr. Gascón points to data that shows lengthy sentences increase recidivism and thus make the public less safe — a direct rebuttal to those supporting the recall in the name of public safety. He believes that most people, even some that have been convicted of violent crimes and especially those who committed their crimes when they were young, deserve second chances. He has also promised to do more to hold the police accountable for on-duty shootings, and is reviewing old cases in which Ms. Lacey decline to prosecute.

Mr. Gascón said that his office will carefully weigh whether a person is suitable for release, either because of advanced age or because they are model inmates, and that people still believed to be dangerous to the public will not be let out early. And judges and parole boards would have the final say.

Already, in his first three months in office, prosecutors have sought roughly 8,000 fewer years in prison compared to the same period a year ago through eliminating many so-called enhancements — special circumstances such as the use of a gun in a crime, or gang affiliations or prior felonies under the “three strikes law,” a pillar of an earlier era’s war on crime — that can add years to a sentence.

The elimination of enhancements has perhaps provoked the most anger from his own prosecutors, who form the largest office in the country. A lawsuit filed by the Los Angeles Assistant District Attorney’s Association resulted in a judge ruling largely in favor of the union, saying that in most active cases underway before Mr. Gascón took office he cannot order prosecutors to eliminate the enhancements.

Richard Ceballos, a longtime deputy district attorney who prosecutes gang cases, said he was outraged when he was ordered by the new administration to remove a gang enhancement in a case in which an alleged MS-13 gang member was accused of stabbing a transgender woman in MacArthur Park. He briefly ran for the top job before exiting the race in 2020, and endorsed Mr. Gascón.

“I so regret endorsing him or giving him any money,” he said. “I’m a progressive prosecutor. I don’t think he’s progressive. He’s reckless and dangerous.”

Mr. Ceballos said he and other prosecutors opposed to Mr. Gascón are “smart enough” to figure out how to carry out his directives in ways that are not directly insubordinate but are unsuccessful in the courtroom. He said though he can no longer ask for gang enhancements, he can make it clear in court that he believes a suspect is a gang member, and leave it for the judge to decide. At the same time, while Mr. Gascon has directed prosecutors not to seek cash bail, Mr. Ceballos asks detectives to ask for bail on court documents.

“We look for loopholes, just like any lawyer,” he said.

The fact that inmates have taken notice of Mr. Gascón’s initiatives has been seized upon by those who believe the changes underway in Los Angeles are a threat to public safety.

The California District Attorneys Association pointed to the prison video as evidence that “violent criminals” will be the biggest beneficiaries of Mr. Gascón’s “radical policies.”

“We have multiple incidences of convicted murderers who are very aware of Gascón’s directives and are trying to take advantage,” said Vern Pierson, the president of the association.

For the activists who helped elect Mr. Gascón, this is only the beginning of what they hope is a sustained push to transform criminal justice in Los Angeles. They say he is doing everything he said he would, and are rallying around him to oppose the recall. Ivette Alé, an organizer with Dignity and Power Now who advised Mr. Gascón, said the elimination of gang enhancements was something she had long pushed for, because they have led to severe racial disparities in sentencing.

“That is huge,” she said. “That policy would do so much for racial and economic justice.”

On Friday morning, allies of Mr. Gascón, including union leaders, faith leaders, Black Lives Matter activists and formerly incarcerated people, rallied in downtown Los Angeles. Robert Carson pointed to himself as an example of someone who changed in prison, and said he hopes others will get the same chance. “I did everything necessary to rehabilitate myself,” said Mr. Carson, 56, who left prison in February after serving 23 years for murder.

If Mr. Gascón survives the recall and is able to push through his agenda, his goal over the long term is ambitious: that California can eventually close two or three state prisons by dramatically reducing sentences, especially for those who were young when they committed crimes.

“I don’t think any of us would want to be judged by one of the dumbest things that we did, especially when it’s a young person,” Mr. Gascón said.