‘Like a Dream’: Latin Americans Head to U.S. for Covid Shots

RIO DE JANEIRO — Florencia Gonzalez Alzaga, a photographer from Buenos Aires, hatched her plan to fly to the United States for a coronavirus vaccine after the subject came up in her Zoom book club.

Juan Pablo Bojacá, an Instagram influencer from Colombia who specializes in frugal travel, urged his 137,000 followers to give it a try, posting a step-by-step video guide that showed him clearing passport control in Miami.

José Acevedo, a real estate agent in Paraguay, was stunned by how easy the whole thing was in Las Vegas.

Frustrated with the lagging pace of vaccine campaigns at home and seeing a surplus of doses in the United States — where tens of millions of Americans have opted not to get inoculated — wealthy and middle-class Latin Americans with American tourist visas have been flocking to the United States in recent weeks to score a Covid-19 shot.

“It’s like a dream,” said Ms. Gonzalez, who got her shot in Miami in April.

The access has proved a bonanza for the privileged in countries where the virus continues to take a brutal toll — even if many, including those who are benefiting, struggle with the fact that vaccine tourism exacerbates the inequality that has worsened the pandemic’s toll.

Sean Simons, a spokesman for the ONE Campaign, which works to eradicate disease and poverty, said vaccine travel could have serious unintended consequences, and urged nations with vaccine surpluses to funnel them instead through a World Health Organization vaccine distribution system known as Covax.

“Millionaires and billionaires traveling across continents or oceans to get a vaccine, usually twice, means greater exposure, higher likelihood of variants spreading and access only for the most elite,” he said.

The Biden administration said this month that it would give 80 million vaccine doses by the end of June to countries that are scrambling to vaccinate their people.

Still, as success stories of Latin Americans getting their jabs are shared on social media posts and by word of mouth, and local officials in New York and Alaska actively encourage vaccination tourism, the cost of airfare on several routes has skyrocketed as thousands make plans to head north. 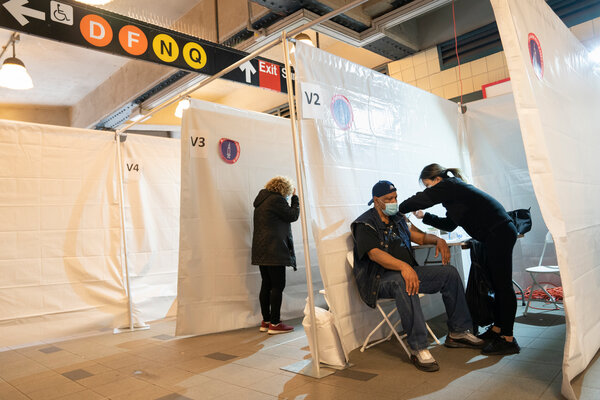 Travel agencies in the region have begun selling vaccination packages, including multicountry itineraries for Brazilians, who must spend two weeks in a third country before being allowed to enter the United States.

José Carlos Brunetti, the vice president of Maral Turismo, a travel agency in Paraguay’s capital, Asunción, said these trips had been a godsend for his industry after a dismal year.

“The frenzy to travel to the United States to try to get vaccinated began in March,” he said. “Now we’re seeing exponential growth in the number of passengers and flights.”

Broadly, foreigners who enter on a tourist visa are allowed to seek medical care in the United States.

While the State Department conducts security background checks on foreigners applying for visas, officials said it did not screen for people who are visiting explicitly to get a vaccine, and there appears to be no federal government guidance for foreigners coming to the United States for that purpose.

Once in the country, officials said, it is up to states, local communities and individual health care providers to decide whether to give the vaccine without proof of American residency.

Prominent politicians in Latin America have been among those who have flown to the United States for a shot.

César Acuña promised as a presidential candidate in Peru earlier this year that he intended to be “the last” in his country to get a shot. But after losing at the polls, he said there was no point in keeping that promise.

Mauricio Macri, the former president of Argentina, vowed in February that he would not “be vaccinated until the last Argentine in a high-risk group and all essential workers have.” Despite having imposed a series of strict quarantine measures since last year, Argentina is facing a widespread epidemic that experts believe is being fueled in part by a highly contagious variant first detected in Brazil.

Despite his vow on waiting to get vaccinated, Mr. Marci wrote in a post on Facebook this month that he had received the Johnson & Johnson single-shot vaccination in Miami after realizing that “vaccines are being applied everywhere, from beaches to malls and even at pharmacies.”

Among 12 Latin Americans who traveled to the United States for vaccines and were interviewed for this article, several expressed feeling conflicted. Some who declined to speak on the record said they felt guilty about getting vaccines while compatriots who are more vulnerable to the disease remain exposed.

Ms. Gonzalez, the Argentine photographer, said her plan had been conceived after members of her online book club began talking more about their fears related to the pandemic than about the books they were reading.

“We started talking about it and figured: Why shouldn’t we go to Miami and get vaccinated?” she said. “From one week to the next we bought the tickets.”

Ms. Gonzalez said she had been able to easily book a vaccine appointment the day after arriving in Miami on April 1. The Johnson & Johnson shot she received at a Salvation Army center there was the end of an agonizing period of isolation that reminded her of her cancer treatment seven years ago.

She was surprised by how few questions the people at the vaccination site asked. “They wanted to vaccinate people,” she said. “They were excited to be vaccinating.”

Travelers were initially reluctant to acknowledge the purpose of their trip, he said.

“Now that’s changed,” he said. “People seem more willing to talk about it openly, and that in turn motivates other people to do it as well.”

That’s what Mr. Bojacá, the Colombian Instagram influencer, did. The video of his vaccination journey, posted on Instagram, includes a surreptitiously recorded scene in which an American passport control officer asked who he was visiting. He and a travel companion said they were visiting friends.

“The guy didn’t even ask what we came here to do,” Mr. Bojacá marveled in a subsequent scene in the video. “I had practiced like 80 times how to say ‘vaccines’ in English.”

While the stream of vaccine travelers from countries like Colombia, Peru, Argentina and Mexico has been growing for months, Brazilians have faced a unique challenge.

Andrea Schver, the owner of Venice Turismo, a travel agency based in São Paulo, said the ban had not been insurmountable for wealthy customers, who are increasingly willing to spend several thousand dollars to secure a shot. In April she sold packages that included a two-week layover in places like Cancún or a Caribbean island. Just in the first 18 days of May, she arranged trips for more than 40 passengers, she said.

Clients include a television personality who will start recording a new show soon and other wealthy Brazilians who are used to taking extravagant vacations each year, she said.

“These are families who travel all year long, and they’ve been grounded for the past year with money to spare,” she said, noting that almost all clients had purchased business-class tickets. “These aren’t people who are going to look for bargains.”

Mr. Acevedo, the real estate agent in Paraguay, said he had come to see his vaccine trip as a worthwhile investment and possibly a lifesaving step, because being overweight puts him at higher risk.

“I can’t stop working, producing, and my work entails contact with many people,” he said.

He reasoned that by securing an American vaccine, he is easing the burden on the Paraguayan government.

“Part of this is not taking up a dose from people who need them more,” he said.