Leaning on Journalists and Targeting Sources, for 50 Years

This article is part of a special report on the 50th anniversary of the Pentagon Papers.

The warning, on White House stationery, came from the general counsel to President Donald J. Trump, and the wording was pretty stark.

“We understand that The New York Times may soon print an article regarding the North Korean ballistic missile program,” Donald F. McGahn II wrote to The Times in the opening months of the Trump administration. He acknowledged that there had been extensive discussion of the article with Mr. Trump’s national security advisers and a range of intelligence officials. But, he said, “we remain concerned that the article could include classified information, might harm the national security of the United States, and would come at a particularly sensitive time for U.S.-China relations.”

Mr. McGahn did not explicitly threaten to go to court to stop the article from appearing — at that stage he was asking only for a delay so that H.R. McMaster, newly appointed as Mr. Trump’s national security adviser, could engage in discussions.

But inside the legal department of The Times, there was debate about whether the new president — who had called the press the “enemy of the people” — would try to re-litigate the Pentagon Papers case and slap The Times with prior restraint to prevent publication. Or would he seek to prosecute reporters under the century-old Espionage Act? No one knew.

The Times published the article, an account of a secret electronic warfare program designed by the United States to send North Korean test missiles spinning into the ocean. At the request of intelligence officials, we omitted a few technical details, to avoid compromising other continuing programs.

In the end, the article drew no public condemnation from Mr. Trump, who on that morning was preoccupied with charging — falsely, it turned out — that the Obama administration had tapped his communications during the 2016 election.

It was only one moment in which New York Times Company v. United States, the Pentagon Papers decision rendered 50 years ago, still defines the balance of power between the media and the government. That contentious balance — a battle that stretches back in American history to the Alien and Sedition Acts of 1798 — was highlighted again in recent weeks with the revelations that the Trump White House had secretly obtained the phone records of several journalists, including New York Times reporters. 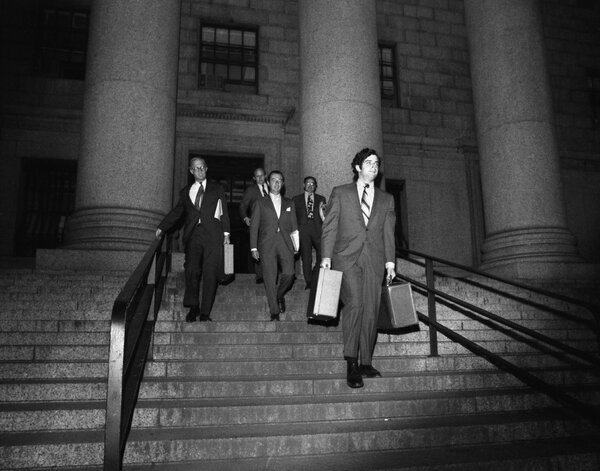 “Few are the days,” Richard Clarke, a former senior national security official in the Clinton and Bush White Houses, wrote recently, “in which no major national newspaper in the United States reports information that the U.S. government has classified as Secret or even Top Secret.”

That is true, because the Pentagon Papers case set the press free to publish secrets in ways that were unimaginable in 1971. Reporting on drone warfare and secret U.S. bases in Africa, on offensive and defensive cyberoperations, on the status of barely-secret negotiations with Iran or the Taliban, is now common practice.

In the torrent of such national-security reporting — everything from disclosures by WikiLeaks to covert efforts to undermine Iran’s nuclear program — government officials and the major news organizations have reached an unspoken understanding.

The government reluctantly acknowledges that, under current case law, the final decision about publication belongs to editors and publishers, not government officials. The government may hunt for leakers, but the press is mostly left alone — except when courts try to force them to reveal their sources, or government officials reach for secret court orders to glean that information surreptitiously.

That unspoken bargain, the practical result of the Pentagon Papers case, fundamentally changed the nature of national security journalism. It has confirmed an ability to publish secrets about the workings of the U.S. government that would not be tolerated in other democracies, from Britain to Israel to Australia. And in newsrooms across America, it has given leverage for journalists to force government officials to explain, sometimes in classified detail, their objections to the publication of an article, the revelation of government action or a classified trove of documents.

There is good reason to press for those answers. Government officials know that information is wildly overclassified — a problem that has gotten significantly worse since Senator Daniel Patrick Moynihan wrote a book about it two decades ago — and so they have to make the case to reporters and editors why a certain set of facts will truly put lives or operations in jeopardy. They often have a hard time making that case. But those conversations also force us as journalists to scrutinize our own reasoning and standards about what to publish — and to think hard about the human consequences of those decisions.

The result is that the daily details of national security decision-making — a messy mix of the classified, the confidential and the public — are now the daily background noise of news gathering. In an internet connected-world where little stays secret for long, it is all becoming public at a speed and scale that Supreme Court justices, reporters and editors and the U.S. government could not imagine 50 years ago.

By today’s standards, no one would blink at publishing the Pentagon Papers. By the time the presses rolled back then, the work of the Vietnam Study Task Force, which produced the papers, was already at least two years old.

The situation on the ground in Vietnam had changed so dramatically in the intervening time that the government could not make a credible case that publication would put lives in danger. But the journalistic value of the revelation was huge: The task force’s own work pulled the covers back on both policy errors and public lies — and they were embarrassing to the government.

If we had a similar government-authored history of mistakes made in Afghanistan through early 2019, it would most likely be published in a flash. In fact, just before the pandemic The Washington Post ran something very akin to the Pentagon Papers for America’s longest war. They even called it “The Afghanistan Papers.” But after 20 years of disclosures about a long war gone awry, the revelations made relatively few shock waves.

Today, most of the modern jousting between journalists and the government is about far more current operations.

For years after the Sept. 11 attacks, these issues came up often in reporting on government efforts to prevent terrorism, and questions about possible surveillance overreach or attacks on terrorism suspects that were also taking out schoolchildren. These days, they frequently focus on the “hybrid war” space, the kind of constant, short-of-war operations, like the cyber- and electronic-warfare campaign against North Korea, or responding to the SolarWinds and Colonial Pipeline cyberattacks on American networks and infrastructure.

When we published, two years ago, an article about a U.S. program to place malware into the Russian electric grid — malware that was designed to be seen by the Russians, as a warning to them not to mess with American power supplies — intelligence officials told us they had no problem with our revelation. After all, the Russians already knew all about it. But no one told Mr. Trump, who turned to Twitter (before he was banned) to declare that The Times had committed a “virtual act of treason.” It was a charge so extreme — treason carries the death penalty — that the publisher of The Times, A.G. Sulzberger, warned that Mr. Trump had crossed “a dangerous line in the president’s campaign against a free and independent press.”

It is one more example of why it is impossible to report on these kinds of national security matters without running into information that the government considers highly classified — oftentimes to protect intelligence sources, or keep an adversary from understanding secret U.S. capabilities. But more and more, that same intelligence is available from nongovernment sources, who are patrolling the internet and often see attacks brewing before the National Security Agency does.

The world first learned that Russia’s premier intelligence agency, the S.V.R., was responsible for the SolarWinds attack when it was pieced together through evidence from companies like FireEye and Microsoft. It took the intelligence agencies weeks to catch up, and weeks more to decide which of their findings to declassify.

All this makes for a far more complex brew than existed in 1971. And add to that the arrival of whistle-blowers — whatever their motives — who can download vast archives of materials onto a thumb drive and, unlike Daniel Ellsberg, make them public without really knowing what they have, or what it proves.

There is now a whole new pipeline to the public that largely bypasses traditional journalistic safeguards — and that is already eroding the quiet give-and-take between government officials and reporters they know, even if there is a level of distrust on both sides.

Today, anyone with a Substack account can publish at the touch of a button. Even if The New York Times had not published the State Department cables released by WikiLeaks in 2010, or The Washington Post and others had not given an outlet to Edward A. Snowden’s 2013 disclosures, the material would have all appeared on the internet, revealed by organizations that believe in publishing anything and everything, no matter what the damage.

In a recent essay, Michael Morell, the former acting director of the C.I.A., argues that the damage from the Snowden leaks was vast. True, he acknowledges, some good may have come from the disclosures, such as President Barack Obama’s decision to alter the system by which it collected data on all calls made in the United States. Mr. Obama also ordered an end to the tapping of the cellphone of the German chancellor, Angela Merkel.

But Mr. Morell argues that had the whistle-blowers followed the law, and privately gone to congressional oversight committees or higher government officials, their revelations could have resulted in the needed reforms — without the collateral damage.

To him, people who favor publication even if there is some collateral damage to American interests, “simply have not thought it through — either in general or in the specific cases they cite.”

But the central problem is that in a world where everyone is a publisher, the fragile post-Pentagon Papers understanding between the government and traditional news organizations breaks down. No government official is going to be candid about what secrets really matter with someone she does not know, or with someone who will not engage in a thoughtful exercise before they decide to publish.

When the first big WikiLeaks disclosures first happened more than a decade ago, The Times engaged in some vigorous behind-the-scenes conversations with government officials, and cut out some details that might have endangered Chinese dissidents and a secret American source in the government of Col. Muammar el-Qaddafi in Libya.

The State Department officials we dealt with were still unhappy that the documents were being published, but they acknowledged that the give-and-take — what the noted First Amendment scholar Alexander Bickel called the “disorderly situation” created by the Pentagon Papers decision — prevented worse harm. And Times journalists were satisfied that leaving out potentially harmful details took away little from the huge impact of the inside look at how American diplomacy is really practiced.

But it is hard to imagine that senior government officials would engage in that kind of discussion with WikiLeaks itself. After all, the organization has said it believes in publishing everything, with no exceptions. And it was clearly used, knowingly or not, by Russian intelligence agencies in the 2016 effort to manipulate the presidential election.

In 1971, when the Supreme Court ruled against the government’s attempt at prior restraint, these kinds of quasi-journalistic media outlets did not exist. And none of them have yet precipitated a legal showdown that might force a reconsideration of the Pentagon Papers case and its central protection of press freedom. But it is only a matter of time.