This is the Education Briefing, a weekly update on the most important news in American education. Sign up here to get this newsletter in your inbox.

Many law schools across the country are trying to thin their swollen classes, and MacKenzie Scott gave millions to colleges serving students in need. 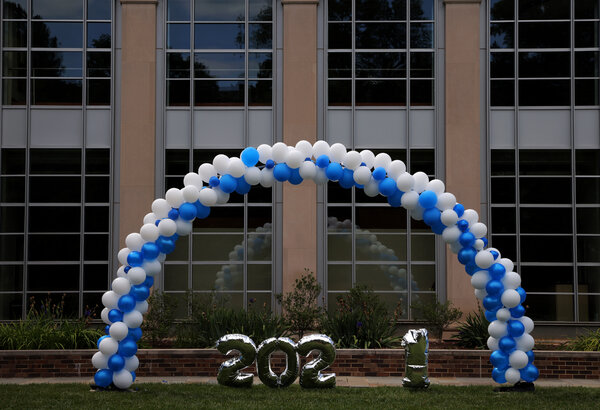 Too many law students?

Law schools experienced a surge in applicants over the past year, driven by a mixture of factors, including the coronavirus pandemic, the presidential election and the Black Lives Matter movement.

Perhaps the biggest driver, however, was a spike in LSAT scores: Applicants took a shorter version of the admissions test, which was administered online, and had more time to study during pandemic lockdowns.

“I don’t think the test questions were any easier,” said Mike Spivey, the founder of Spivey Consulting, which helps students navigate the law school admissions process. But the anxiety facing test takers appears to have eased somewhat, he said.

The result: more students with strong scores, a record number of applications (out of 200 law schools surveyed by the Law School Admission Council, 190 had an increase), and some schools that accepted too many people are now asking students to defer a year to avoid overcrowding. Overall applications were up by about 30 percent across law schools.

“The fact that many law schools are finding themselves oversubscribed for this fall is no surprise,” said Ann Levine, the president of Law School Expert, another consultancy for would-be lawyers. “We knew a year ago that application numbers were going to be through the roof by the number of people taking the LSAT last June.”

To ease the load, many schools have promised that scholarships will be in place for students if they choose to defer. A few are offering financial incentives. Duke promised $5,000 to students who accepted a “binding deferral” and promised to go next year.

Columbia University also dangled money in front of some students: $30,000 if they deferred. The school focused on recent graduates and also offered some career placement help, like two sessions with a career counselor and a list of open jobs.

The offer wasn’t enough to convince Molly Lu, 23, a student from Toronto. Right now, she is making minimum wage selling pool supplies. She aspires to a job in Big Law, which can carry a starting salary of $200,000.

“The opportunity cost of a year of lawyering compared to a year of selling, like, pool floaties?” she said. “That’s too much to be overcome.”

But Lu and other law students could face a tight job market three years from now, if this year’s flood makes it to graduation.

MacKenzie Scott, Jeff Bezos’s ex-wife and one of the wealthiest women in the world, announced on Tuesday that she was giving away $2.74 billion to 286 organizations, including several institutions of higher education.

The schools that Scott and her new husband chose to support were not the kind that usually attract multimillion-dollar gifts, which tend to be highly prestigious, selective universities.

Instead, Scott said in her blog post, she “looked for 2- and 4-year institutions successfully educating students who come from communities that have been chronically underserved.”

For at least several of the schools, the gifts from Scott and her husband were the largest they had ever received.

Scott, who received 4 percent of Amazon’s stock in her divorce settlement, had already given away more than $5 billion.

Black professors are pushing Penn State to address their concerns about racism they say they have endured.

Connecticut may create an automatic admissions process for its seniors to attend the state’s four regional universities.

Jennifer Rocha graduated from the University of California San Diego, and took her photos in the same field where her parents work picking vegetables. “I’m proud that that’s where I come from,” she told NPR.

A good read from Slate: “If we really wanted to get rid of the most glaring case of bias at prestigious private universities, we would target private high school students,” James S. Murphy argues in “The Real College Admissions Scandal.”

A New Hampshire high school marked students at prom with Sharpies to differentiate their vaccination status. (Red for vaccinated; black for unvaccinated students or those without proof.) A state representative compared it to Nazi practices.

Gov. Ron DeSantis of Florida signed a bill requiring a minute of silence for meditation or prayer in public schools.

Two Black seniors won the top honors at their Mississippi high school. Then, after parent protest about a grade calculation error, two white students were named co-valedictorian and co-salutatorian.

A guest essay from The Times: Lelac Almagor, a teacher and parent at a charter school in Washington, D.C., writes that remote learning was terrible for her students, and she is glad many districts are getting rid of it next year.

A good read from The New Yorker: The number of Black parents home-schooling their children rose sharply during the pandemic, as parents turned away from schools they felt had never served their children well. Groups that advocate charter schools and vouchers, including the Walton Family Foundation and the Charles Koch Institute, are now financing Black home-schooling collectives.

‘Teaching my Black son to swim’

Summer is almost here, and with it the joys, but also the risks, of trips to the beach and to pools.

In a moving essay for The Times, Imani Bashir wrote about why, from the time she was pregnant with her son, now 4, she was determined that he would learn how to swim and would not fear the water.

As Bashir, who is Black, explains in her article, this may be a result of intergenerational trauma surrounding Black people and swimming, as throughout American history, swimming pools and beaches were among the most racially segregated spaces, and white people sometimes resorted to violence to keep Black people out of the water.

Now there is at least one organization dedicated to making sure that Black people become confident swimmers. Its founder recommends that someone who is afraid of the water take private swimming lessons, or group lessons with a family member or friend joining them.

Sign up here to get the briefing by email.