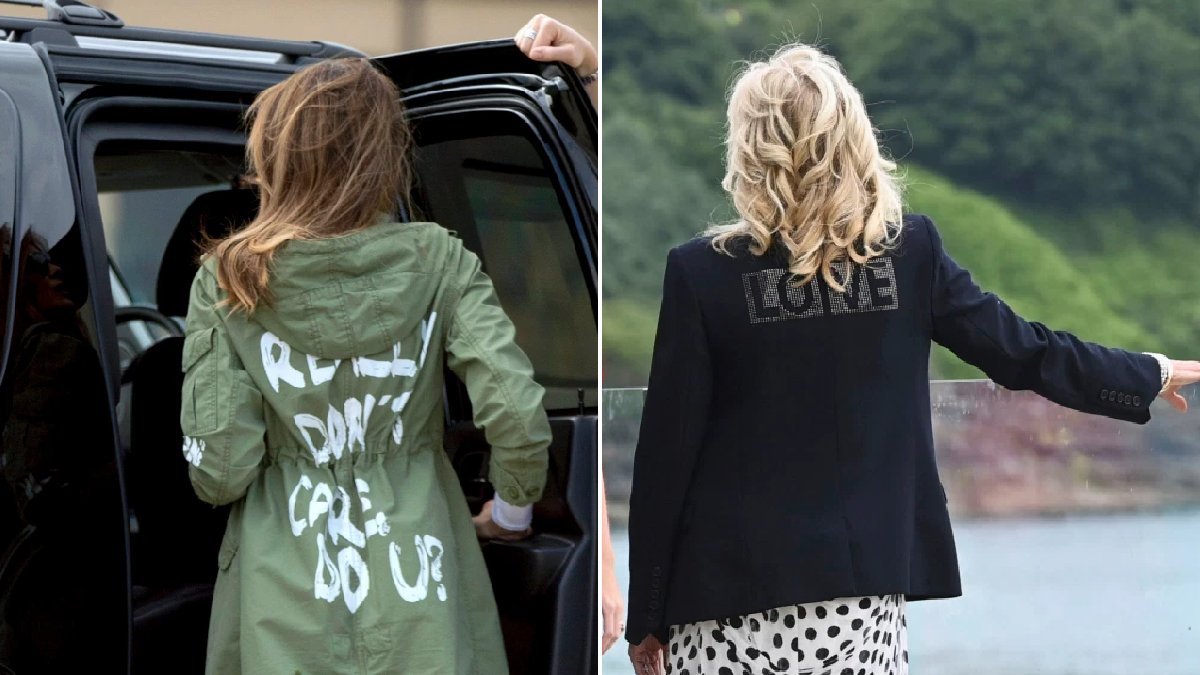 First Lady Jill Biden donned a jacket with ‘LOVE’ on the back during her visit to the UK, drawing immediate comparisons to former First Lady Melania Trump’s controversial ‘I really don’t care, do u?’ jacket.

Biden’s black blazer with LOVE inscribed around the shoulder area inevitably made many on Thursday wonder if it was intended as a jab at her predecessor. Trump infamously wore an olive green jacket with the far less warm and fuzzy message on the back in white while visiting migrant children at US’s southwestern border in 2018.

Trump’s fashion statement drew significant criticism, as many interpreted it as tone deaf and applying to the children separated from their families under her husband’s administration. The then-first lady’s spokeswoman later stated that the message was instead directed at journalists.

Speaking about her jacket about five months after she wore it, Trump said: ‘I want to show the (left-wing media) that I don’t care. You could criticize whatever you want to say, but it will not stop me to do what I feel is right.’

Unlike Trump, Biden, 70, quickly explained what she meant to convey with her LOVE jacket.

‘I think that we’re bringing love from America,’ Biden said in Cornwall, where she and her husband met with Prime Minister Boris Johnson and his wife Carrie.

‘This is a global conference and we are trying to bring unity across the globe and I think it’s needed right now, that people feel a sense of unity from all the countries and feel a sense of hope after this year of the pandemic.’

Biden did not address the burning question of whether her jacket was also intended as a type of rebuke to Trump, or if she got the idea to wear it from her predecessor.

When asked to comment on the matter, Biden’s communications director only referred to the first lady’s comments to reporters, according to The New York Times.

Despite Biden’s refusal to comment on comparisons, some Twitter users concluded that it was a slap back, and others applauded the wardrobe selection.

‘Great bit of Melania-trolling from Jill Biden today, arriving with “LOVE” on the back of her jacket instead of “I Really Don’t Care Do U?”‘ one Twitter user wrote.

Bros4America, a volunteer political advocacy organization that formed in 2016 with the goal of electing former First Lady Hillary Clinton as president, juxtaposed images of Biden and Trump and tweeted: ‘Massive upgrade.’

Another Twitter user wrote: ‘Jill Biden actually cares. Melania Trump on the other hand, doesn’t give a damn.’