An influential supporter of Donald Trump and evangelical Christian leader has left his role over a racy photo he posted on social media.

Jerry Falwell Jr got into hot water because the picture showed him with his arm round a young woman, and with his trousers partially unzipped.

He was holding a glass that contained a dark liquid.

A caption accompanying the Instagram post said: “More vacation shots. Lots of good friends visited us on the yacht. I promise that’s just black water in my glass. It was a prop only.”

The post was subsequently deleted, but was widely shared elsewhere.

Mr Falwell announced on Friday that he would be taking an indefinite leave of absence from his leadership positions at Liberty University, the school his father founded in 1971.

It is one of the world’s largest evangelical Christian colleges and has strict rules over dress code and social activities.

A statement issued by the university did not address the image and post directly, but said its executive committee requested Mr Falwell take leave indefinitely from his roles as president and chancellor.

Mr Falwell, a lawyer and academic administrator, had held the post of president at Liberty for 13 years.

He was among the earliest evangelical supporters of the current US president, and has been credited for helping build support for Mr Trump during his 2016 campaign. 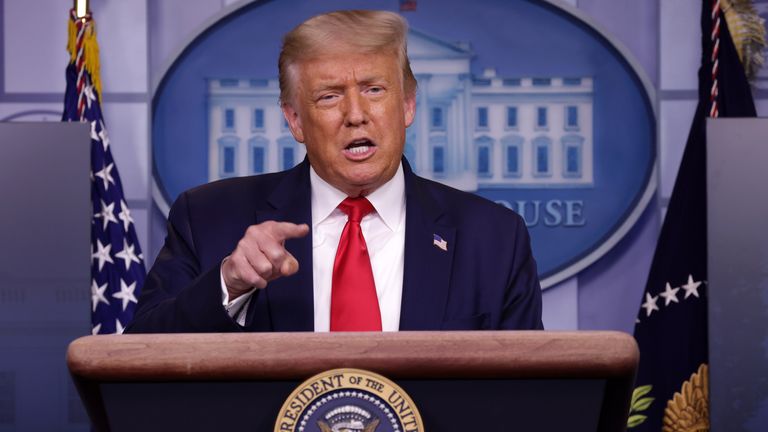 Mr Falwell later identified the woman in the offending picture only as his wife’s assistant, and added that he had apologised to her and “everyone”.

Explaining what had happened after the controversy had erupted, Mr Falwell said that the woman in the photo was pregnant and the jeans he was wearing didn’t fit, leading to the unfortunate image.

He told WLNI talk radio in Lynchburg, Virginia, where the university is located: “I had on a pair of jeans I hadn’t worn in a long time, so I couldn’t get mine zipped either. I just put my belly out like hers.”

Among those who had criticised the photo was Republican member of the House of Representatives Mark Walker, a former Liberty instructor, who said on Twitter that Mr Falwell’s “ongoing behavior” was “appalling”.