‘It’s Really About the State for Me’: Dianne Feinstein on Running Again

(Want to get California Today by email? Here’s the sign-up.)

There is a lot of suspense going into tomorrow’s elections in California. Well, at least in the seven Republican-held congressional seats Democrats are trying to capture as part of their effort to win back the House.

By contrast, the two high-profile state races seem likely to go to Democrats. Polls show Lt. Gov. Gavin Newsom with a strong lead over John Cox, the Republican challenger, in the race for governor. And Senator Dianne Feinstein seems to be gliding to re-election over her Democratic opponent, Kevin de León.

We caught up with Ms. Feinstein last week in Salinas to talk about why she was running again and what she was hoping to do in Congress. Here are some excerpts, which have been edited for clarity and space.

Q. Was the election of President Trump a factor in your decision to run again?

Q. Isn’t it going to be hard to get things done if Democrats don’t win the Senate?

A. Right now, Republicans have a lock on all three branches. You open that lock if you win the House. And I think there is a very good opportunity to win the House.

Q. Do you think President Trump’s attacks on you as doddering are ageist?

A. He’ll take anything he can. I think I’m in good physical condition. It’s the same way he attacked the F.B.I. I don’t know how long you can be president by offending everybody. I think we are going to find out.

Q. One thing you hear from younger voters is that it’s time for you to step aside so that a new generation has a chance.

A. I say that elections are free, open and fair. And I won every district in the state in the primary, including his.

Q. What about a general philosophical question: Should older people step aside to give younger people a chance?

A. I’ve never heard that before. You are the first one who has said that to me.

Q. Well, what do you think of that argument?

A. Not much. I think it takes both.

(Please note: We regularly highlight articles on news sites that have limited access for nonsubscribers.) 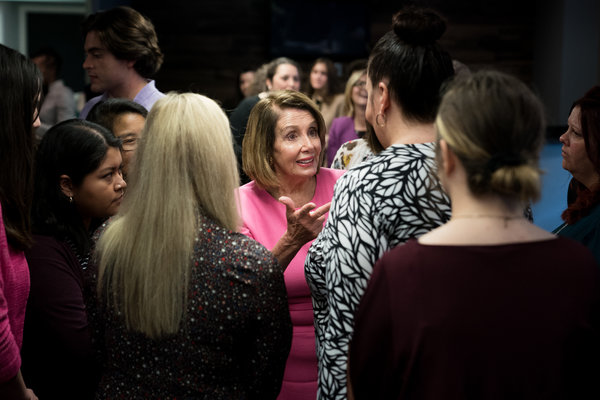 • “Don’t let them think you are running away.” Representative Nancy Pelosi is both demonized and celebrated — and she is unyielding in her work for the Democratic Party. [The New York Times]

• No resource is more vital to livelihoods in the Central Valley than water. That may be what saves Representative Jeff Denham in the 10th District. [The Washington Post]

• The race between Katie Porter and Mimi Walters is a tossup between two white suburban women. But the two couldn’t be more different. [The New Yorker]

• What’s at stake for California on Tuesday? Congressional leadership, immigration and environmental policy, and the status of the resistance and the Republican Party, to name a few. [San Francisco Chronicle]

• These five races in California could determine the future of Congress. [The Sacramento Bee]

• California is home to some of the most heavily contested congressional seats in the nation, with five of them in or near Orange County. [The New York Times]

• Skyrocketing housing costs are accelerating a demographic shift across the Bay Area, creating a “semi-feudal society” in places like East Palo Alto. The crisis is worsening as voters decide on Proposition 10, a ballot measure that could make it easier to impose forms of rent control. [The Washington Post]

• “We’re in a time where I’m more fearful.” Congregants of a small synagogue in Visalia described their relative isolation in the Central Valley and coming to terms with the mass shooting in Pittsburgh. [The Los Angeles Times]

• Minorities, especially Native Americans, face more risk from wildfires than whites, a new study found. It is another example of how the kinds of disasters exacerbated by climate change often hit people of color and the poor the hardest. [The New York Times]

• In memoriam: Ramona Ripston, whose four decades at the helm of the American Civil Liberties Union of Southern California shaped the liberal agenda in Los Angeles and beyond. She was 91. [The Los Angeles Times]

• This Bitcoin tale has a little bit of everything: The investor Charlie Shrem went to prison after he pleaded guilty to illegally helping people turn dollars into Bitcoin to buy drugs online. Now, he’s being sued by the Winklevoss twins. [The New York Times]

Coming Up This Week

• The 44th People’s Choice Awards will be held Sunday.

Punk has a storied history in Los Angeles. Detachment from mainstream life and culture prompted generations to adopt new attitudes in the late 1970s. At the time, the scene was mostly white, teenage and male.

These days, L.A.’s punk culture is largely Latino, reflecting population shifts on both the state and county level. The new music scene is being defined by young Latinos on the outlying areas of the city who are bound by a shared sense of place and disaffection with mainstream culture.

“When I first heard punk, I heard the Germs, I was blown away, and I knew I could bring what I learned on the guitar into writing punk songs,” said Martin Castro, 17, the guitarist in a band called Diversity.

It’s a reiteration of the story that punk has told for decades: Alienation breeds creativity breeds community. And through music, young people are finding an honest way to communicate and a place where they are heard.

Read the full article — and view the photos — here.