‘It’s Like Church to Us’: A Brooklyn Tradition Goes On

This year, the official West Indian American Day celebrations were canceled — but the Carnival spirit came through. 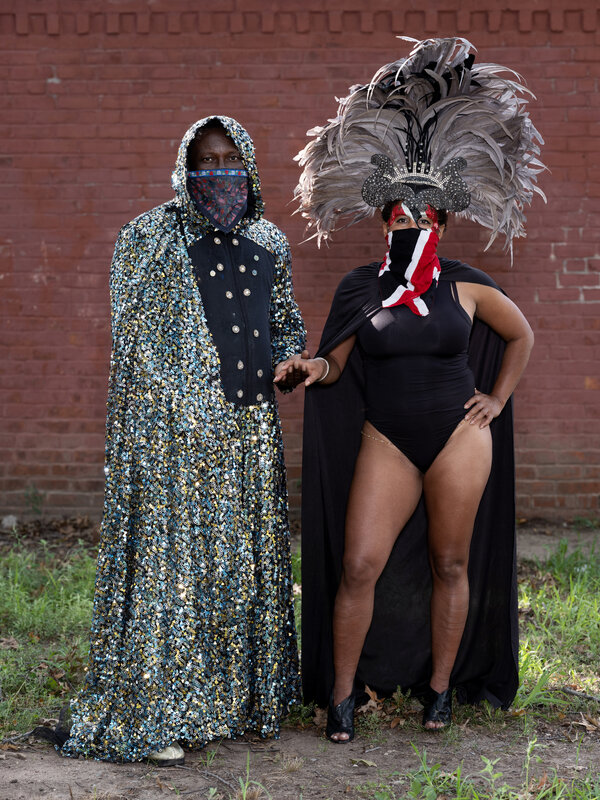 Not celebrating wasn’t an option. When Sandra Morris Bell learned that this year’s West Indian American Day celebrations had been canceled in New York City, she found a way to keep the tradition alive.

In elaborate costumes and face paint, Ms. Bell stood with two of her friends at the corner of Flatbush Avenue and Empire Boulevard in Brooklyn for five hours as a statement to those passing by — whether they were familiar with the celebrations or not — that Carnival is still here.

J’Ouvert, the predawn street festival, and the West Indian American Day Parade that follows it are known for the sound of steel drums, the sight of participants throwing colorful powder and grand costumes flooding the streets around the Crown Heights neighborhood of Brooklyn.

The events celebrate Caribbean culture and identity in New York, and together, they make for one of the biggest cultural celebrations in the city, attracting more than a million people each Labor Day.

In recent years, the J’Ouvert celebrations have been marred by shootings. Early on Monday, a shootout sent five people, including a 6-year-old boy and his mother, to the hospital during an unofficial daybreak celebration in Crown Heights.

This year, even though both J’Ouvert and the parade were canceled because of the pandemic, in pockets of Brooklyn, members of the city’s Caribbean community found ways to celebrate their heritage.

“J’Ouvert has been through so much,” Ms. Morris Bell said of the shootings and this year’s cancellation, “we see it as one more thing we got to go through.”

With a Jamaican bandanna wrapped around his head and a red cup in hand, Tev Sarantino, 25, said he’s been celebrating Carnival since he “came out the womb,” and it felt inconceivable not to participate this year.

On a residential block in Crown Heights, Mr. Sarantino and two dozen others — some in masks, others not — tossed green powder and “dutty wined” — a type of Caribbean dance — to soca music in the early afternoon.

A woman watched from her stoop two doors down with a few older people, reminiscing about how she partied during J’Ouvert in her younger days. “I’m the grandmother now,” she said.

The woman only gave her name as Tasha because she was “ducking work,” she said, in order to enjoy the Labor Day festivities.

“This is the only holiday West Indians have,” she said.

The celebrations are rooted in the emancipation of Caribbean slaves and their descendants. That’s why the festivities today are known for their wild dancing and extravagant attire.

New York’s West Indian parade can be traced back to the 1940s, while J’Ouvert began in the 1980s. The predawn street festival became a formal event in 1993.

In 2015, Carey W. Gabay, 43, an aide to Gov. Andrew M. Cuomo, was fatally shot during the celebrations. A year later, J’Ouvert was granted a parade permit in hopes that a larger police presence would deter violence, but the overnight event has still struggled with shootings.

The parade on Eastern Parkway has been overwhelmingly peaceful.

Ms. Morris Bell said she’s been celebrating the holiday in New York every year since she first moved here from Trinidad in the late 1960s.

“If we didn’t come out, J’Ouvert would’ve died,” she said.

For others, it was important to dress up on Labor Day to break the monotony of lockdown because of the coronavirus.

Junior Elias Andrews, 50, had designed a costume in February in preparation for Carnival. Then the pandemic hit. He said he felt depressed and hadn’t planned to celebrate in the streets on Labor Day, until his friends persuaded him otherwise.

On Monday afternoon, Mr. Andrews dressed up and joined his friends at a park in Crown Heights to take photos. “This is my therapy,” Mr. Andrews said. “I’ll be good for a while.”

A few blocks away, in Prospect Park, a group of models in full Carnival costumes, complete with headdresses, gathered as part of a virtual Carnival event. Sesame Flyers International, an organization that supports Caribbean families in Central Brooklyn, spent two months preparing the virtual show.

Natasha Marcelle, 36, the host of the event and an avid masquerader since high school, said she missed the parade. Yet, seeing the outpouring of her Caribbean peers still wanting to celebrate proved how vibrant the community has become, she said.

“For all those years that we celebrated and made our cultural footprint,” she said, “we now know that our culture is etched in New York.”