THOUSAND OAKS, Calif. — Only hours after a gunman attacked a country music bar in Thousand Oaks, the city was once again struck with panic. This time, fire forced the evacuation of the town still reeling from the devastating shooting.

Residents in Thousand Oaks had just begun to mourn the 12 people killed late Wednesday at the Borderline Bar & Grill when the second crisis this week set the city on edge. For hours after the shooting, people crowded into the Thousand Oaks Teen Center, anxious to find out if their loved ones had survived. It was well past lunchtime before it began to empty out. But by midnight, it was crowded again — this time as a fire evacuation center.

As wildfires spread through Ventura County, thousands of residents were forced to evacuate, including some who had survived the shooting just 24 hours earlier.

For Dylan McNey, a 22-year-old carpenter, the evacuation orders were the least of his worries. Mr. McNey has survived two mass shootings just a year apart: first, at the county music festival in Las Vegas, then once again in Thousand Oaks this week. Mr. McNey used to work as a security guard at the Borderline, and said he is there at least a couple of times a week.

Although his friends had all survived the Las Vegas shooting, a woman he helped to escape eventually died of her wounds, he said. Six of his friends were killed at the Borderline shooting. 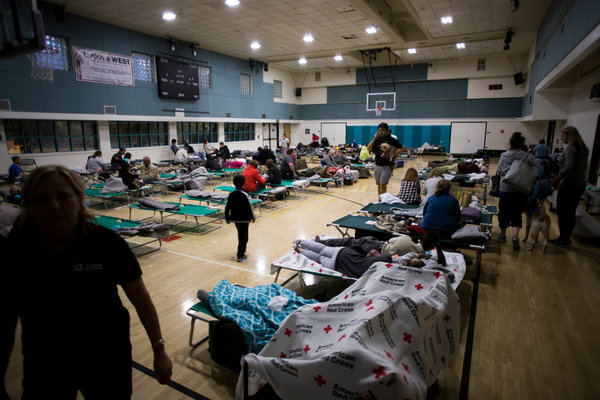 On Thursday afternoon, he gathered at his house with several friends so they could be together in their grief. When they received an evacuation order, his mother and sister left. But Mr. McNey decided to stay put, along with his father, a former firefighter, and watched the fire from their backyard.

“We had a good view from where it was starting,” he said.

The family survived the Lake Arrowhead Fire several years ago, and felt they could stick it out this time. And, he said, he just wanted to stay at home at such a difficult time.

“We saw the fire creeping over the hill and saw the news on TV, and felt we didn’t want to leave,” he said.

On being a survivor of both the Las Vegas and Borderline shootings, he said simply, “I wish I could tell you what it was like to go through it twice.”

In some ways, the attack at Borderline was even more traumatic, he said, because it happened at home. “It’s literally five minutes from my house,” he said.

The evacuations extended to several hotels in the area, where many residents had already gone to flee the flames coming close to their homes. Dozens of F.B.I. agents from Virginia, in town to help with the shooting investigation, awoke to loudspeakers at a hotel in nearby Agoura Hills, announcing that they were now under mandatory evacuation orders.

“This is just crazy, it really can’t get much worse,” said a young man working the front desk at the teen center, who would only give his first name, Billy, and who was handling a barrage of questions he could not answer for the second time in two days.

Just before dawn on Friday, few people were sleeping at the evacuation center, instead crowding around a television showing local news, with images of flames juxtaposed with names of the dead from Wednesday’s shooting.

The response to the shooting has moved rapidly, as if the community had learned from every other one that had gone through a similar tragedy. The city held a prayer vigil at the Thousand Oaks art center Thursday night, where hundreds of residents held plastic battery-operated candles. There were already T-shirts memorializing the shooting.

“This is just a beginning, many many families are affected,” said Mayor Andy Fox, whose voice broke with tears as he spoke. “Communities coming together make a difference. We will be strong because we have to be.”

The Ventura County medical examiner released the names of the victims Friday morning. With thousands evacuated in Thousand Oaks and dozens of homes destroyed, the fast-burning fire was still threatening to burn more in the city, and will likely delay funerals for the victims.

On Friday afternoon, open flames shot smoke into the air near the Thousand Oaks Teen Center, where people were taking shelter from the fire. Many businesses throughout town were closed and it was unclear if the shelter itself would need to be evacuated.

Lonnie Schrader, a pastor, said he and his family were hosting acquaintances who were evacuated from their homes. He expressed shock that the community had to pivot so quickly from Wednesday night’s shooting to fire preparation.

“Because it’s an emergency, you have to suck it up and do what you can, and you put your emotions on a shelf a little bit to process later,” he said. “I don’t know what in the world is going on.”