Directly outside the Veterans Memorial Coliseum near downtown Phoenix, the Crazy Times Carnival wraps up an 11-day run on Sunday, a spectacle of thrill rides, games and food stands that headlines the Arizona State Fair this year.

Inside the coliseum, a Republican-ordered exhumation and review of 2.1 million votes in the state’s November election is heading into its third week, an exercise that has risen to become the lodestar of rigged-vote theorists — and an utter crazy times carnival to many others worried about the state of American democracy.

Unlike the spectacle on the outside, it shows no sign of ending soon.

There is no evidence that former President Donald Trump’s narrow loss in Arizona’s presidential election in the fall was fraudulent. Nonetheless, 16 Republicans in the State Senate voted to subpoena ballots in Maricopa County, home to Phoenix and two-thirds of the state’s vote in November, for an audit to show Trump die-hards that their fraud concerns were taken seriously.

As recently as a week ago, officials said the review would be completed by May 14. But with that deadline a week away, only about 250,000 of the county’s 2.1 million ballots have been processed in the hand recount that is a central part of the review, Ken Bennett, a liaison between those conducting the review and the senators, said on Saturday.

At that rate, the hand recount would not be finished until August.

The delay is but the latest snag in an exercise that many critics claim is wrecking voters’ confidence in elections, not restoring it. Since the State Senate first ordered it in December, the review has been dogged by controversy. Republicans dominate the Maricopa County Board of Supervisors, which supervised the election in the county. They said it was fair and accurate and opposed the review.

After a week marked by mounting accusations of partisan skulduggery, mismanagement and even potential illegality, at least one Republican supporter of the new count said it could not end soon enough.

“It makes us look like idiots,” State Senator Paul Boyer, a Republican from suburban Phoenix who supported the audit, said on Friday. “Looking back, I didn’t think it would be this ridiculous. It’s embarrassing to be a state senator at this point.”

Civil-rights advocates say political fallout is the least of the concerns. They say the Arizona review is emblematic of a broader effort by pro-Trump Republicans to undermine faith in American democracy and shift control of elections to partisans who share their agenda.

“This subpoena and this audit is not dissimilar to what’s happening with a number of bills being pushed nationally that basically take fair, objective processes and move them into partisan political bodies,” said Alex Gulotta, the state’s director of All Voting Is Local, a national voting-rights advocacy group. “This is not an aberration. This is a window into the future of where some people would like our elections to go.”

Mr. Bennett, a former Republican secretary of state and onetime candidate for governor, said companies hired to conduct the review plan to hire more temporary workers to step up the pace of the count. But its conclusion is still weeks away. 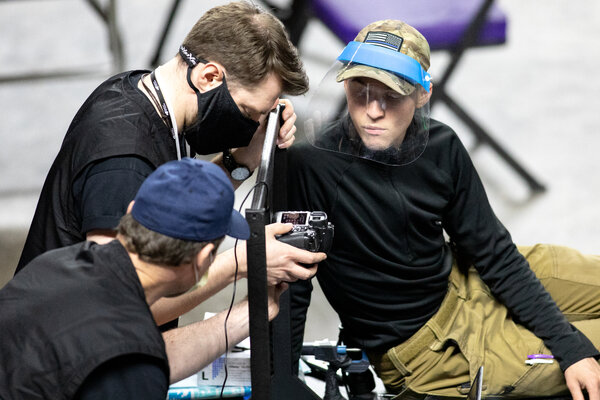 Later this month, workers will have to suspend work and move their entire operation — work stations, imaging equipment, stacks of uncounted ballots that cover much of the coliseum floor — into storage elsewhere in the building to make way for a spate of high-school graduation ceremonies long scheduled to take place the week of May 17.

In an interview, Mr. Bennett said that no storage site had been selected, but that he was optimistic that the hand count would be wrapped up quickly.

“When we come back, we’ll have the last week of May and all of June, but I don’t think it’s going to take that long,” he said. “The hand count should be done by the middle of June.”

Senators have cast the review as a way to reassure supporters of Mr. Trump who had lined up behind his baseless claim that his 10,457-vote loss in November was the result of a rigged election. While it will not change the outcome of the election, they said, it may put to rest any doubts about its results.

But doubts about the true purpose blossomed when Karen Fann, the Republican president of the State Senate, hired a Florida firm, Cyber Ninjas, to conduct the review. Its chief executive had promoted on Twitter a conspiracy theory that Mr. Trump’s loss in Arizona was the result of rigged voting machines.

Journalists, election experts and representatives of the secretary of state, whose office is responsible for elections in Arizona, have struggled with getting permission to observe the review, while the far-right One America News cable outlet has raised money to finance it and has been given broad access to the proceedings.

Claims of partisanship ballooned after it was revealed that one man who was hired to recount ballots, former State Representative Anthony Kern of Arizona, was a leader of the local “stop the steal” movement and had been photographed on the steps of the U.S. Capitol during the riot on Jan. 6 in Washington. Mr. Kern had been on the Maricopa ballot, both as a Republican candidate for state representative and as a pro-Trump presidential elector.

The review came under heavy fire last week from both the Arizona secretary of state and the federal Justice Department, which separately cited widespread reports that slipshod handling of ballots and other election items threatened to permanently spoil the official record of the vote. The Justice Department noted that federal law requires record to be kept intact under penalty of a fine or imprisonment. Some of the most serious questions involve the management of the review.

On Wednesday, Katie Hobbs, the Arizona secretary of state, charged that the review was being conducted with uncertified equipment and that ballot counting rules were “a significant departure from standard best practices.”

She wrote: “Though conspiracy theorists are undoubtedly cheering on these types of inspections — and perhaps providing financial support because of their use — they do little other than further marginalize the professionalism and intent of this ‘audit.’”

After her claims drew a number of death threats from Trump supporters. Gov. Doug Ducey of Arizona ordered state police protection this past week for Ms. Hobbs, a Democrat.

The Justice Department raised issues about the protection of the ballots, and it also questioned whether another aspect of the process — a plan to go to voters’ homes to verify that they had actually cast ballots, as election records showed — could violate federal laws against intimidating voters.

In her reply to the department, Ms. Fann defended the review, saying it is being conducted under “comprehensive and rigorous security protocols that will fully preserve all physical and electronic ballots, tabulation systems and other election materials.”

But she appeared to back away from the plan to personally interview voters, stating that the State Senate “determined several weeks ago that it would indefinitely defer that component of the audit.”

Ms. Fann said in a letter on Friday that the Justice Department’s concerns were “misplaced” and that strict rules safeguarding documents and equipment were in place. On Saturday, Mr. Bennett said the concerns about the integrity of the process were “completely unfounded, and I believe they come from people who have always decided that they don’t want the audit at all.”

Ms. Fann, who had largely remained silent about criticism of the review, chose last week to mount a public defense of it. Appearing in an interview on the Phoenix PBS news outlet, she applauded the role of One America News in supporting the review and said the Senate had no role in choosing Mr. Kern or others who counted votes.

“I don’t know why he’s there or how he got there, but that’s one of the people that was selected, and that is what it is,” she said. “I don’t know that it’s a great thing, to be honest.”

And she said that the news media had blown concerns about the objectivity and management of the review out of proportion.

“They talk about conspiracy theories,” she said, referring to reports that the review is examining ballots for evidence of bamboo fibers and watermarks baselessly said to be signs of fraud. “But I tell you what, there’s almost a reverse conspiracy theory to demean this audit.”

She suggested that her support of the review would be proved right in the end.

“I think we’ll find irregularities that is going to say, you know what, there’s this many dead people voted, or this many who may have voted that don’t live here any more. We’re going to find those,” she said. “We know they exist, but everybody keeps saying, ‘You have no proof.’ Well, maybe we’ll get the proof out of this so we can fix those holes that are there.”

More common is the notion that the review has become an alarming exercise in undermining faith in America’s elections.

One expert on election law, David J. Becker, the founder of the Center for Election Administration and Research in Washington, said Ms. Fann’s assurances about the integrity of ballots and other records appeared unlikely to satisfy the Justice Department.

“There’s no question that contamination of ballots and records is an ongoing issue that raises serious concerns about federal law,” said Mr. Becker, a former lawyer in the Justice Department’s voting rights section. “We’ve never seen anything like this before, where some haphazard effort allows some unknown out-of-state contractor to start riffling through ballots. I think it’s pretty clear that the response does not resolve concerns about ballot integrity.”