These seven words were the first the jury heard from Steve Schleicher, a prosecutor, in his closing argument in the trial of Derek Chauvin. With them Mr. Schleicher, standing in a bland Minneapolis courtroom, answered a call from the spirited streets 18 floors below, where protesters, for nearly a year, had been shouting a simple demand: Say His Name.

Over the course of the three-week trial that ended last week with a murder conviction for Mr. Chauvin, a white former police officer whose victim was Black, race was rarely an explicit topic of discussion. And yet the presence of the Black Lives Matter movement, which demands that all Black people be seen for their full humanity, was felt throughout the proceedings.

Sometimes it was overt — potential jurors were asked how they felt about Black Lives Matter on a questionnaire. More often, it was implicit. The idea that Mr. Floyd was a full person and not just a body beneath a knee showed up in tearful witness testimony and in the closing argument, in which Mr. Schleicher uttered the word “human” more than a dozen times. The judge prevented the defense from introducing most evidence of Mr. Floyd’s past run-ins with the law, while a Minnesota law allowed prosecutors to elicit testimony from his family, presenting him in a way that has been rare in police shooting cases. 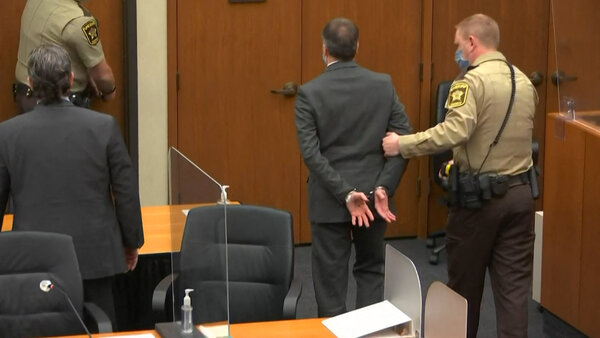 For generations, the American criminal justice system has operated by an old playbook in cases of police violence. The backgrounds of victims are placed under a microscope. Prosecutors deciding whether to bring charges against officers parse every misstep from victims’ past, as do defense lawyers in the rare instances that officers are charged.

There was the Laquan McDonald case in Chicago, where the defense tried to get the victim’s own mother to testify that he had a violent past. In Kenosha, Wis., a prosecutor focused in part on Jacob Blake’s past domestic abuse cases in explaining why no charges were filed against the officer who shot him.

The Chauvin trial flipped the script. Mr. Floyd, who had moved to Minneapolis for a fresh start, became a three-dimensional character. Mr. Chauvin, who declined to take the stand, remained an aloof figure, shown on video kneeling on Mr. Floyd’s neck for nine and a half minutes with such sang-froid that his sunglasses never lost their perch atop his head. He likely faces between 12.5 and 30 years in prison when he is sentenced in June.

“I don’t think he comes across as like a likable kind of guy,” Lisa Christensen, an alternate juror in the trial, said about Mr. Chauvin. “I didn’t get any vibes from him like he was sorry. It was just cold, like a cold feeling.”

She left the courtroom feeling a profound sense of empathy for Mr. Floyd, saying that the prosecution put “a face on a human being to the name of George Floyd.”

Critics of police violence have become quick to denounce anything that smacks of victim-blaming, saying that a flawed past or an unwillingness to submit to police control should not be a death sentence.

As a general rule, the past “bad acts” of victims are not allowed in the courtroom, any more than those of the accused are, to prevent jurors from making judgments based on past behavior rather than the evidence in the case at hand. But there are exceptions, and victims of police violence have been called out for drug use, failure to pay child support and domestic violence and even been compared — unfavorably — to a Boy Scout.

In the Chauvin case, the defense lawyer, Eric J. Nelson, argued that he needed to present Mr. Floyd’s past arrests to show a pattern of behavior. And evidence of Mr. Floyd’s drug use underscored the arguments that Mr. Chauvin was dealing with an unpredictable subject and that the drugs contributed to Mr. Floyd’s death, Mr. Nelson said.

In the case of Mr. Blake, who the authorities say was armed with a knife when Officer Rusten Sheskey shot him in the back last year, the district attorney referenced a history of domestic violence allegations against Mr. Blake at a news conference announcing his decision not to file charges.

In an email to The New York Times, Michael D. Graveley, the Kenosha County District Attorney, explained that he was attempting to help the public understand why officers would take a domestic abuse call so seriously.

“I agree with those who say no one should ever simply make decisions on use-of-force cases by citing individuals’ prior records or contacts with police,” Mr. Graveley wrote.

But Justin Blake, an uncle, said the portrayal was “racist as hell.”

“He’d rather talk about all these other different crimes that he was accused of but not convicted of,” Justin Blake said. “So he was painting my nephew as this big Black creature guy.”

In cases where officers are charged, what the jury hears about the victim can sway the outcome, said Jared Fishman, a former federal prosecutor.

In the state trial of Michael Slager, the white officer who fatally shot Walter Scott, a Black forklift driver, in the back while he ran away in South Carolina in 2015, defense lawyers called Mr. Scott “out of control.” They alluded to trace amounts of cocaine found in his system, implied that someone with “good intent” would not owe child support, as Mr. Scott did, and evoked testimony that Mr. Scott was dangerous based on a decades-old conviction for carrying a “bludgeon.”

The jury was unable to reach a verdict. The Justice Department then pursued a federal civil rights case, led by Mr. Fishman, in which prosecutors were able to persuade a judge to keep much of that out of any trial. “We destroyed his defense in pretrial hearings,” Mr. Fishman said. Mr. Slager pleaded guilty and is serving a 20-year sentence.

In the Laquan McDonald case, a video showed Laquan, 17, walking away with a knife when Officer Jason Van Dyke fired 16 shots. The defense was allowed to bolster its case with testimony from six witnesses, most of whom worked at a juvenile detention center, about previous incidents that the defense believed showed that Laquan had a “propensity for violence.” The court allowed the testimony even though Mr. Van Dyke was not aware of the incidents at the time of the shooting.

At trial the defense said Laquan had been on a “wild rampage,” and suggested that the killing might have been unjustified had it been a “kid in a Boy Scout uniform,” rather than Laquan, walking down the street with a knife. The jury convicted Mr. Van Dyke of murder.

In the Twin Cities, comparisons have been drawn between Mr. Chauvin’s trial and that of Jeronimo Yanez, who shot and killed Philando Castile with his girlfriend and 4-year-old daughter in the car. The judge allowed jury instructions that referred to Mr. Castile’s marijuana use and whether his own negligence was a factor in his death. Mr. Yanez was acquitted.

In the Van Dyke case, the judge said prosecutors could not refer to Laquan as a victim. In the Chauvin trial, Judge Cahill said he would allow it, but would prefer if he were simply called “Mr. Floyd.”

Prosecutors acknowledged Mr. Floyd’s struggle with drug abuse head on, placing it within the context of America’s ongoing opioid addiction crisis. Mr. Floyd’s girlfriend, Courteney Ross, testified about their shared struggle and attempts to get clean. Mr. Floyd’s brother, Philonise, wept on the witness stand as he spoke about Mr. Floyd’s love for their mother.

Mr. Schleicher also challenged the common assumption that struggling with the police equates to resisting. He told jurors that Mr. Floyd’s refusal to get into a police car was not resistance, but a result of his anxiety that the officers should have had some empathy toward.

Judge Cahill rejected many of the defense’s attempts to present evidence of Mr. Floyd’s drug use and past arrests.

“What I think the defense did was put on an old-school, pre-2020 defense,” said Paul Butler, a former federal prosecutor who is a professor at Georgetown Law School and an expert on policing and race. “Hopefully that defense of dehumanizing African-American victims and putting the victim on trial, hopefully that defense is relegated to history.”

But there is healthy skepticism about whether Mr. Chauvin’s trial represents a turning point in how Black victims are portrayed.

“I think it’s just an exception,” said Justin Blake, pointing to the Minneapolis police chief, who quickly fired the officers accused of killing Mr. Floyd, and the special prosecutor, who was a civil rights lawyer, as helping to set a different tone.

Many factors aligned against Mr. Chauvin — from the gruesome video of him kneeling on Mr. Floyd to the liberal city where it happened to Minnesota’s allowance of so-called “spark of life” testimony that allows the family and friends of victims to tell jurors about their loved ones.

Keith Ellison, the attorney general, took over the prosecution of the case from the county prosecutor. He brought with him a background as a civil rights lawyer and a team of private attorneys rather than workaday prosecutors who have close ties to law enforcement.

“They had a comfort level in humanizing George Floyd that I generally think prosecutors don’t have the same comfort level,” said Andrew Gordon, the deputy director of the Legal Rights Center, a nonprofit in Minneapolis that provides defense counsel for indigent defendants.

Bridgett Floyd, one of Mr. Floyd’s sisters, said the prosecution did a good job of introducing George Perry Floyd Jr. to the jury.

“I feel like they walked away wishing that they could have met my brother, because of all the great things people had to say about him,” she said. “Because that’s who he really was — he was not all the things the defense was making him out to be.”