Until 2016, the video performer Randy Rainbow (yes, that’s his real name) was enjoying a healthy YouTube following. Mr. Rainbow found his way to fame, however, once Donald Trump ran for president. This is when the actor and singer, now 36, transformed his quirky online performances, which he’d been doing for years, into political parodies. One of his first, “Braggadocious!” — reminiscent of “Supercalifragilisticexpialidocious” from Mary Poppins — garnered 28 million views over 48 hours. More recently, “Kavanaugh!” (which sounds a lot like “Camelot”) was viewed 2.5 million times. Mr. Rainbow writes, styles, records and edits his videos himself. They usually combine show tunes or Top-40 songs with highly doctored cable news interviews, in which he appears as a guest anchor, wearing his signature pink cat-eye reading glasses. Currently, he is on tour with his one-man show, “Randy Rainbow Live.” When he’s in town, he lives with his Persian cat, Mushi, in his two-bedroom walk-up in Astoria, Queens. 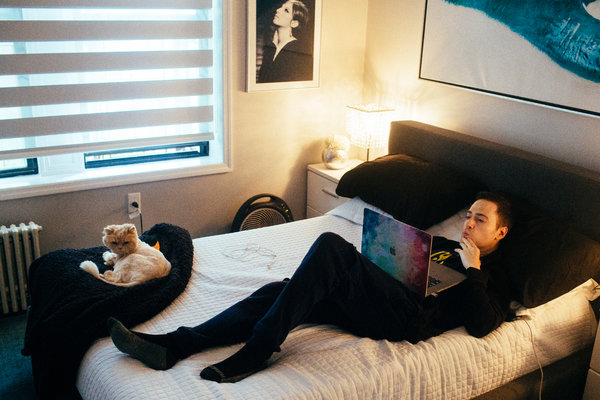 ONE DAY MORE I don’t sleep too late. I’m up by 9 or 10. I don’t use an alarm, though sometimes Alexa wakes me, especially if I have to get up at a certain time.

WHAT’S THE BUZZ I could stay in bed all day. Usually it’s for one or two hours. I check email and social media. I go to the verifieds on Twitter, then scroll through mentions or if people have requests of me. I spend time seeing what’s trending and look for possible ideas for my next project or I’ll spend 30-minutes editing an upcoming video. I watch NY1 for local news. And CNN is on one of my two TVs all day. I might watch a Barbra Streisand concert now that Netflix is streaming them.

OH WHAT A BEAUTIFUL MORNIN’ By 11 or 11:30 I force myself up. I’m in a pair of old sweatpants and T-shirt, or if I’m feeling festive, my “RuPaul’s Drag Race” bathrobe, which was gifted to me when I made a cameo on the show. I try to stay healthy so I have Kashi GoLean or Nature’s Path, with Almond Breeze milk. I’m not much of a coffee drinker, though I just bought a Keurig machine 2.0 and these lovely cups if I’m really in need of a jolt, which tends to be in the middle of the day.

COOL By 12:30 I’m showered and dressed — jeans, T-shirt, hoodie. Sunday is all about being comfortable. I’m a very casual person.

MY FAVORITE THINGS For the next hour I’ll hit the thrift stores, like Unique Boutique and Steinway, both are a block away. They’re not your run of the mill places. They have higher end stuff. I look for props for my shows and videos. I found a pink hat and scarf there, which I wore in my “Omarosa!” video. Other places I search are Amazon, which literally has everything you could want, like my banana costume and the Mrs. Potts from “Beauty and the Beast.”

YOU BETTER WORK My gym, Blink Fitness, is across the street. It’s cute, cheap. I don’t like gyms, but I try to get my heart rate up once a day. I don’t do long workouts because it’s boring. So for the next 30 minutes I’ll do cardio and lift some weights.

LADIES WHO BRUNCH I’ll take the subway into Manhattan and by 2:30 or 3 I’ll meet up with my girls — John Retsios, Ryan Raftery, Jeff Romley — for brunch. We’ll go to Elmo’s, Hell’s Kitchen or Cafeteria, which I love because I used to work there as a host in 2004-6, which is where I got my sass. It’s where I learned how to be gay. They have a great turkey burger. Their mac and cheese is legendary and their Cafeteria Cosmo is my jam.

NON-STOP By 5 it’s time for a cocktail. We’ll hit some bars since we’re in the area, or start at Therapy in Hell’s Kitchen, which is the new Chelsea. Therapy is one of my old favorite places. It’s nostalgic. I’m not really love-driven right now, but after a couple of cocktails, why not? I’m happy to meet and greet.

I LOVE THE NIGHTLIFE I love a good pub crawl so we’ll go from Therapy to places like Posh and Flaming Saddles. After a week of being cooped up in my apartment and working it’s a great way to decompress, to drink and be silly, and escape the news for a few hours. I like anything that’s vodka and fruity. I’m a basic bitch when it comes to drinks. I’m socializing and hopping around.

I CAN COOK TOO It’s around 11 when I slide into an Uber. Once home, it’s time for a snack. I’ll order pasta alla greca with tortellini and zucchini with garlic oil and feta cheese from the Bel-Aire Diner, which is also from across the street. It’s the perfect drunk food.

EVER AFTER I’ll do some Huluing or Netflixing for a few hours. By 2 a.m. it’s time for sleep.