How Much Damage Do Atmospheric Rivers Cause? 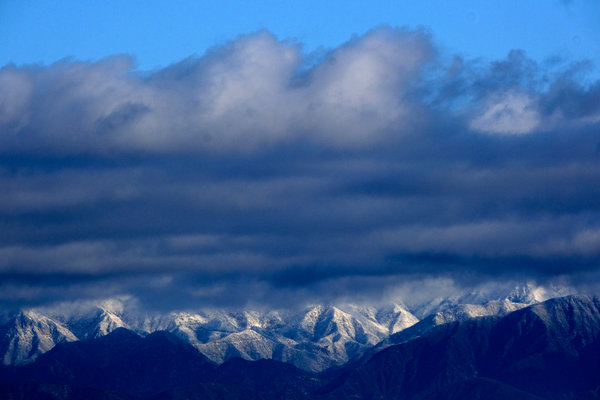 (Want California Today delivered to your inbox? Sign up here.)

It rained in Southern California again on Wednesday.

The storm, Marty Ralph told me, was caused by an atmospheric river, a meteorological phenomenon you have been hearing more about lately as climate change drives bigger swings between tinder dry conditions and pounding rain.

And although the rain caused the usual traffic headaches and advisories against swimming at the beach, this particular atmospheric river was actually “primarily beneficial,” according to a scale that Mr. Ralph, the director of the Center for Western Weather and Water Extremes at the Scripps Institution of Oceanography, helped develop.

[Read more about the scale for categorizing atmospheric rivers.]

In other words, there was significant rainfall, but not nearly enough to cause dangerous flooding.

The same could not be said of all atmospheric rivers, however: They’ve caused almost $51 billion in flood damages across the West over 40 years, a new report by Mr. Ralph’s colleagues found.

In fact, atmospheric rivers cause an average of $1 billion of damage per year in the West, according to the report, published this week in the journal Science Advances — although the average smooths out the reality that most of the damage was done during a smaller number of more severe events.

“We’ve known that the biggest impacts from climate change economically are from extreme events: floods, wildfires, droughts,” Tom Corringham, a research economist at Scripps and the lead author of the study, told me. “But extreme events are less predictable and harder to adapt to in the short term.”

He and his team looked at flood insurance data from 1978 to 2017 and connected it with information about atmospheric rivers over that period.

Sonoma County, which bore the brunt of floods in February that essentially turned the town of Guerneville into an island, sustained the most damage among top counties from atmospheric rivers: $5.2 billion.

Mr. Corringham said his team’s report built on Mr. Ralph’s work to better understand atmospheric rivers, which haven’t been studied as much as, say, hurricanes.

But he said that atmospheric rivers were expected to become wetter, longer and wider as the climate warms, and that translating the ravages of climate change into dollars and cents was often a useful tool for encouraging policymakers to work to reduce emissions.

Next, Mr. Corringham said he hoped to create models to predict how much damage future storms could cause. He also hopes to study possible benefits of the additional rainfall, if it can be captured and stored.

“If we don’t act now, we risk severe damage to the economy,” he said.

Here’s what else we’re following

We often link to sites that limit access for nonsubscribers. We appreciate your reading Times coverage, but we also encourage you to support local news if you can.

Gov. Gavin Newsom on Wednesday hired a homelessness official who was fired by the Trump administration amid a dispute over proposals to address California’s homeless population. The official, Matthew Doherty, reportedly clashed with the White House over a plan to move homeless people into unspecified federal facilities. [The New York Times]

A consultant who told cities to stop “enabling” homeless people in part by blocking charities from handing out food has been picked to be Mr. Doherty’s successor. [The Los Angeles Times]

Also: Read what L.A.’s top homelessness official had to say about the job as he prepares to step down. [The New York Times]

Representative Devin Nunes has sued CNN for more than $435 million, claiming that the network published a “demonstrably false hit piece” on him. Mr. Nunes has also sued Twitter and The McClatchy Company, which owns The Fresno Bee. [USA Today]

Jehad Serwan Mostafa has become what the federal authorities call the “highest-ranking U.S. citizen fighting overseas with a terrorist organization.” He’s from San Diego, and the F.B.I. is intensifying its search for him. [The New York Times]

Newly released body camera footage shows a Ceres police officer issuing no commands before firing more than a dozen shots at a 15-year-old as he ran into an orchard in 2018. The authorities said that the teenager, who was fatally shot, had dropped and picked up a handgun as he got out of a Lexus that the officer had been pursuing in a high-speed chase. [The Modesto Bee]

For decades, Alan Tandy has worked as Bakersfield’s city manager. Now, as the city prepares for continued growth and change, the City Council is working to find his successor. [The Bakersfield Californian]

Anaheim has struck a deal with the Angels to continue playing in the city at Angel Stadium for another 30 years. Under the terms of the proposed agreement, the city would sell the stadium to a partnership that includes the team’s owner. [The Orange County Register]

A Los Angeles furniture dealer has turned his compact apartment into a showroom. It saves money, and it helps prospective buyers imagine how they could style some of the more out-there pieces. [T Magazine]

When Border Patrol agents threw away migrants’ belongings, a janitor at an Arizona facility took photos of them. The results are on view at the Skirball Cultural Center in the exhibition, “El Sueño Americano / The American Dream: Photographs by Tom Kiefer.” [The Los Angeles Times]

A marijuana dispensary in Desert Hot Springs is asking, “Would you like a joint with that?” (It just opened a drive-through — only the second in the state — and the owners had to get around some state regulatory hurdles.) [The Desert Sun]

And, if you missed it, here’s what West Hollywood’s first weed restaurant tells us about the industry. [The New York Times]

As you’ve probably heard, the end of the decade is nigh.

(If you haven’t already dug into some of The Times’s looks back, including the most influential films or this interactive featuring 33 ways to remember the 2010s, they’re well worth the scroll.)

It’s tough to think of a place whose culture has shifted as fundamentally as the Bay Area’s in the past 10 years. But, as KQED lays out in an expansive project, the changes have been more complicated than the simple influx of fleece-vest-clad tech wealth.

For each year of “Our Turbulent Decade,” there’s an essay examining how one moment shaped the Bay’s cultural landscape going forward.

When the San Francisco Giants finally won the World Series in 2010, for instance, it was the start of an era of sports dominance across the region. (The Warriors were, inconceivable as it sounds now, not very good.)

And while the devastation of 2016’s Ghost Ship warehouse fire was compounded by the displacement of local arts communities that took place in the aftermath, this piece traces the ways that some have been able to gradually rebuild — and adapt.

California Today goes live at 6:30 a.m. Pacific time weekdays. Tell us what you want to see: CAtoday@nytimes.com. Were you forwarded this email? Sign up for California Today here.

Jill Cowan grew up in Orange County, graduated from U.C. Berkeley and has reported all over the state, including the Bay Area, Bakersfield and Los Angeles — but she always wants to see more. Follow along here or on Twitter, @jillcowan.