How Leaves, Icicles and an Old Bridge Can Complicate Commutes

Every day this week, New Jersey Transit has heaped more frustration onto its customers by warning them that their morning trains could be delayed by “slippery rail” conditions.

To some beleaguered riders, that explanation sounded like a concocted excuse for the railroad’s continuing struggle to operate on time. A few even challenged it.

Slippery rail conditions? I admire the creativity but it’s 55 degrees and barely misting.

Slippery rails is, in fact, a problem and is just one of the reasons New Jersey has cited to explain the delays and disruptions that have plagued its service. Others have included “manpower shortage,” annulments, a malfunctioning Portal Bridge and the mysterious “ice patrol.” (One explanation that veteran commuters take seriously is “trespasser incident,” which they know means someone was hit by a train.)

Here’s a translation of these various bêtes noires and why any one of them can ruin a commuter’s day.

Do train tracks really get slippery in Autumn?

Monday through Thursday, New Jersey Transit said its train service could be delayed by as much as 30 minutes because of rails made slippery by fallen leaves. The agency said this is an “age-old” problem that affects all railroads in the Northeast in the fall.

Indeed, commuter railroads from Boston to Philadelphia were citing slippery rails as a cause of delays this week. Slippery tracks were blamed for railroad delays even in England this week.

The condition is caused by the heavy steel wheels of trains crushing fallen leaves and producing an oily residue or the tracks, New Jersey Transit said. When the trains cannot get traction, they have trouble braking and getting up to full speed between stations, it said.

The railroad tries to minimize the effects by trimming trees along the tracks and by dispatching trains with special equipment, known as Aqua Track, which power washes the rails.

What is a Portal Bridge and why does it get stuck so often?

Last week, the cause of train delays was not slippery rails but a balky old bridge. The Portal Bridge, a 108-year-old swing bridge that carries trains over the Hackensack River, is an infamous choke point on the Northeast Corridor between New York City and Newark.

The bridge pivots to allow boats to pass by but often fails to lock back into place, blocking traffic to and from Pennsylvania Station in Manhattan. When that happens, Amtrak, which owns and operates the bridge, may have to dispatch a crew to hammer the rails until they line up again.

New Jersey Transit said there had been 326 delays in the last 12 months “related to Amtrak Portal Bridge issues.”

Amtrak has partnered with New Jersey Transit and the Port Authority of New York and New Jersey on a plan to replace the bridge with a higher, fixed span. But that project is estimated to cost $1.5 billion and the sponsors are hoping the federal government will cover about half of that amount.

Is the Ice Patrol real or a fanciful excuse? 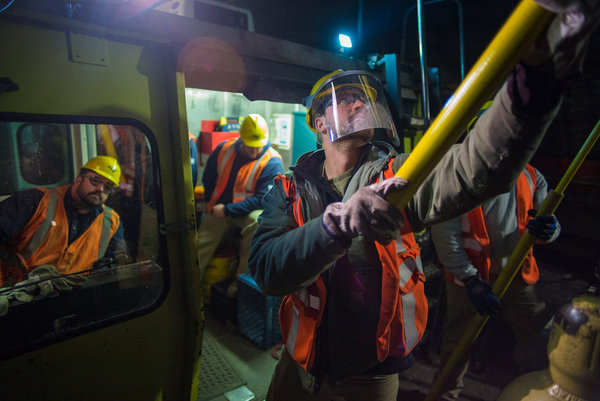 Veteran commuters know that as surely as winter follows fall, the “ice patrol” will succeed slippery rails as a cause of delays.

Far-fetched as it may sound, during spells of very cold weather, Amtrak sends a crew into the tunnels under the Hudson River to remove icicles. The ice that forms on the ceiling of the century-old tunnels interferes with the ability of trains to draw power from the overhead electrical wires.

Workers clear the icicles the old-fashioned way: they stand on a rail car and whack them with long poles that have hammer heads. But while they are doing that only one track is available between New York City and New Jersey, a situation known as “single-tracking.” Hardened commuters know that single-tracking can wreak havoc on their trips to work or back home.

Why is Amtrak being blamed?

A pet peeve of many New Jersey Transit riders is the railroad’s propensity to assign blame for delays to Amtrak. The two railroads have a landlord-tenant relationship that at many times has been less than friendly.

The tension stems from New Jersey Transit’s reliance on Amtrak property, including Penn Station and the tracks that lead from it all the way past the state capitol in Trenton. Amtrak’s rails, bridges and signals often malfunction, causing delays for all commuters heading to or from New York City. When that happens New Jersey Transit makes clear in its announcements that this is an Amtrak problem.

The Portal Bridge replacement is part of a larger project, known as Gateway, that would include adding two tracks in a new tunnel under the Hudson River. If it is completed, Gateway could reduce conflicts between the two railroads.

Is there a worker shortage and does it cause annulments?

During the summer, New Jersey Transit had a rash of cancellations of scheduled trains. But it described many of those cancellations as “annulments,” a term that irritated some customers.

Nancy Snyder, a spokeswoman for the railroad, explained that it reserved the term “canceled” for trains that started their runs but did not complete them because of a breakdown or some other problem. Trains that never started their scheduled runs were “annulled.” she said. She said there had been 3,539 annulments and 705 cancellations this year, which combined amounted to 1 of every 43 scheduled trains.

The cause of many of those of annulments and cancellations was a shortage of engineers to drive the trains and the sidelining of locomotives to install an automatic braking system, known as Positive Train Control. Unable to fulfill its schedule, even after reducing service this spring, New Jersey Transit pared back its schedule again in October.

But the railroad has continued to cancel trains, though it has dropped references to annulments. “Cancellation is a term more widely used and understood,” Ms. Snyder said.

This fall, New Jersey Transit’s go-to explanation for canceling trains has been a “manpower shortage.” State officials have taken several steps to recruit and train more engineers, including waiving a requirement that they live in the state. This week, New Jersey Transit announced that it had received more than 5,000 applications in its quest “to restore the railroad to a full complement of trained engineers.”

Patrick McGeehan writes about transportation and infrastructure for the Metro section. He has been a reporter for the Times since 1999 and has covered Wall Street, executive pay, transportation, the New York City economy and New Jersey. @NYTpatrick