‘How Can I Help?’ Meet 5 People Who Serve the Community

Carolyn Bratton spent part of her childhood in the foster care system. The experience left her meek and dwindled, she recalled recently, incapable of making simple eye contact.

Five decades later, she has grown into a different, more confident person and is using her voice, presence and knowledge to bring positive change to others in need.

“It comes easy to me, working with people, talking to them, listening to them,” Ms. Bratton, 72, said last month at Elmcor Senior Center in East Elmhurst, Queens, where she volunteers once a week.

Ms. Bratton volunteers through the Community Service Society of New York, a beneficiary agency of The New York Times’s 107th annual Neediest Cases Fund. The tradition dates to 1911, when Adolph S. Ochs, publisher of The Times, helped a man in need on Christmas Day. The encounter inspired him to tell readers stories about city residents who also needed assistance.

The 2017-18 campaign raised $5,838,425. Contributions to this year’s campaign will be collected into January, and online donations can be made through GoFundMe.

The Times Company covers the administrative costs of the fund. Our articles, which for the 2018-19 campaign are available outside the Times paywall, illustrate the difference that even a modest amount of money can make to those who are less fortunate. All donations go directly to eight beneficiary organizations:

Catholic Charities of the Archdiocese of New York

The organizations spend the money at their discretion, often to cover gaps in public assistance. Unrestricted contributions of $100,000 or more from trusts and estates are invested in the fund’s endowment. 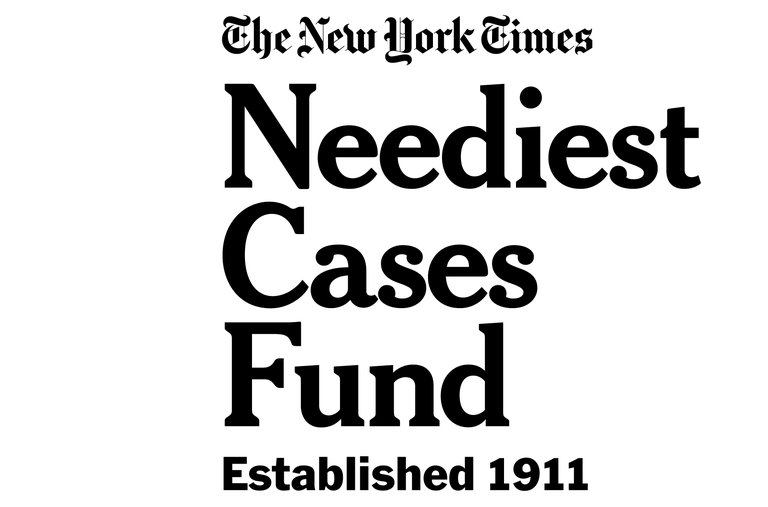 The agencies that benefit from The Neediest Cases Fund also rely on the assistance of volunteers. Today, the campaign is highlighting some of them and the services they help the beneficiary organizations provide. 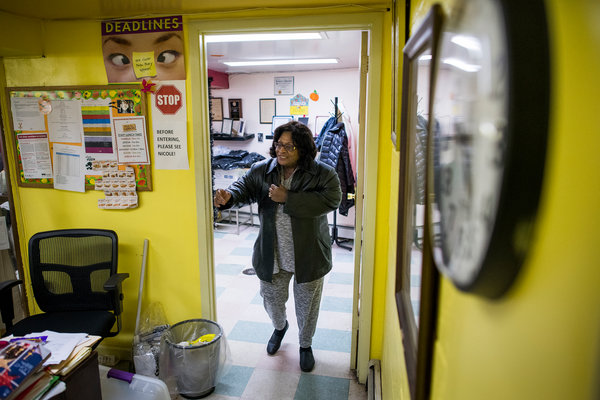 Ms. Bratton’s gift for listening, she said, comes from being denied care and attention herself when she was growing up. As an adult, she took on part-time weekend work with children in foster care in Brooklyn. Some of them were difficult to connect with, until Ms. Bratton shared her own story.

“I sit back and explain to them that I do understand,” she said. “I earn their respect, because they know that I came out of the system.”

At home, Ms. Bratton focused on raising her two children, and in her 40s, she attended New York University, where she had previously worked as an office supervisor, and received a bachelor’s degree. Soon after, she began a career as a social worker for the city’s foster care system.

Now retired, Ms. Bratton sought to continue improving the lives of others in whatever way she could. In 2015, she became a volunteer with the Retired and Senior Volunteer Program, housed at the Community Service Society and was placed at the Elmcor Senior Center.

“We are on this earth for a short time, and if we can make a difference, why not?” she said.

“What makes me keep going is when somebody comes back to me and says, ‘Thank you, I got it,’” Ms. Bratton said. “If it wasn’t for you, I wouldn’t have it.”

John Namkung spent his career working as a teacher and an administrator in special education. After retiring nine years ago, he began volunteering. Life was “pretty predictable,” he said. But when he saw images and stories of the refugee crisis unfolding in Greece in 2015, something changed. A few months later, Mr. Namkung arrived at a refugee camp ready to help.

“It’s not in my nature to do something like that — risky and bold — but I felt compelled to do it,” Mr. Namkung, 70, said from his home in Sebastopol, Calif.

Mr. Namkung joined a group of young people from Europe who were preparing hot meals in Idomeni, Greece. Together, they served up to 5,000 cups of soup a day in the camp.

When he returned home, Mr. Namkung wanted to continue working with refugees, so he reached out to the International Rescue Committee. He volunteers at the agency’s office in Oakland, Calif., several times a week, answering phones and greeting clients at the reception desk, as well as mentoring.

The mentorship role allows Mr. Namkung to draw on his background as an educator, particularly in helping refugees learn English. He is now working with a teenage girl from El Salvador who was reunited with her mother after years apart, and he attended her quinceañera.

Mr. Namkung attributes his sense of service in part to mindful meditation. It might also have something to do with his DNA, he said. His grandfather was a Presbyterian minister living in Japanese-occupied Korea when the Japanese tried to impose the Shinto religion, and he and his family fled to Shanghai. Later, Mr. Namkung’s parents escaped with him and his siblings a few months before Communist rule in Shanghai and they ended up in Hong Kong.

Mr. Namkung said the committee’s mission and staff keep him coming back.

“Between the volunteers and interns and staff, we’re working together for a common goal,” he said. “I’ve found this passion for doing this, and it’s brought a lot of meaning to my life here.”

Jewish Board of Family and Children’s Services, a beneficiary agency of UJA-Federation of New York

It takes the patience (and phone manners) of a saint to deal with New York City’s public housing authority. It also takes perseverance and time, something clients at the Jewish Board of Family and Children’s Services, a beneficiary agency of UJA-Federation of New York, do not always have.

Enter Ellen Hochstein, a former human resources administrator and benefits coordinator for parking garage facilities who now volunteers at the Jewish Board.

“They say I have a good telephone voice and know how to get to the point, how to get the information, how to be proactive,” Ms. Hochstein, 68, said. “I’m someone who never gives up.”

Ms. Hochstein lost her job in the 2008 economic downturn and has been volunteering across New York ever since. She began volunteering at the Jewish Board two years ago and has worked throughout the organization, including helping clients fill out applications for low-income housing.

She also has a passion for helping people advance their careers, preparing clients for job searches by reviewing their résumés and conducting mock interviews.

You can find Ms. Hochstein at the Jewish Board nearly every day. Someday, Ms. Hochstein hopes to turn the skills she has acquired volunteering into a full-time job.

“I like to get up in the morning and have a place to go,” she said.

The students at the Brooklyn High School for Leadership and Community Service are over-age and under-credited. They have dropped out or failed out and come from some of the highest-risk backgrounds in the New York City school system.

This is their last chance at receiving a full high school education. So why not give them something to work toward once they graduate?

That is the idea behind the Speakers Bureau, a program run by Brooklyn Community Services. A new speaker comes monthly to share advice, talk about their journey and inspire the students.

“Two major things these kids lack are role models and exposure to what’s out there in the world,” said Steve Williamson, 45, a Brooklyn Community Services board member and founder of the speaking series. “We want to expose the kids continuously to a broad range of different people from different industries so they learn about the options out there.”

Mr. Williamson, a lawyer, grew up in Downtown Brooklyn and lived there for much of his life. He was looking to get more involved with a community service-based organization when a neighbor introduced him to Brooklyn Community Services. A tour of the school, which the agency helps operate, had him hooked.

“There was something about the school that I felt had a magic to the place,” he said. “I just had this moment where I said, this is where I want to plug in.”

That was six years ago, and since then, Mr. Williamson has brought in people across the career spectrum during the school year. A judge, an assistant district attorney, a hotel manager, a Nike brand ambassador, an Alvin Ailey company director and, recently, a food writer, Korsha Wilson.

“These kids really feel like the deck is stacked against them,” Mr. Williamson said. “It’s all fine and good to hear about successful people, but maybe those opportunities don’t exist for them. When you can bring someone who has overcome the same odds and is doing something really cool, where kids can say, ‘Wow I’d love to be that person,’ it has a tremendous inspiring effect on the kids.”

Even after leaving family behind in her native Dominican Republic and spending 40 years ironing clothes for a laundromat, Juana Pascal recognized that she was luckier than many New Yorkers, she said.

So eight years ago, Ms. Pascal, now 70 and retired, walked into a food bank in Washington Heights and asked, “How can I help?”

“I told them, I want to do something for the community,” said Ms. Pascal, who still lives in Washington Heights. “I knew there were many people struggling to find enough food for them and their children.”

Carmen Reyes, a supervisor with Catholic Charities Archdiocese of New York, which operates the food bank, said she and Ms. Pascal became inseparable from the day they met. When Ms. Reyes was transferred to the Catholic Charities Community Services Bronx Food Hub and Food Pantry a year ago, Ms. Pascal offered to make the trek with her.

“I don’t have any family in this country,” Ms. Pascal said. “She became like a sister. Everyone at the pantry is like blood family now.”

Ms. Pascal left her native Santo Domingo when she turned 22, and her mother dissuaded from returning.

“She said, ‘Don’t come back. Things are tough here. There are no jobs. Stay there and find a better life,’” Ms. Pascal said.

As she does three afternoons a week, Ms. Pascal greeted people at the food pantry on a recent afternoon with a smile and often a hug.

“Te amo! I love you!” said Mariledi Mejias, 59, blowing air kisses at Ms. Pascal with one hand and carrying a bag full of cereal, milk and rice with the other.

Ms. Mejias said even though she works as a home care attendant in Manhattan, she often struggles to pay rent and provide nourishing food to her 11-year-old daughter.

“This city is so expensive. No matter how hard I work, I fall short sometimes. I come here with a smile knowing Juana is ready to help,” Ms. Mejias said. “She’s always so warm, so caring and so respectful.”

Donations to the Neediest Cases may be made online, or with a check or over the phone.