How a Traveling Tennis Racket Stringer Spends His Sundays

Pierre Reveilles lives a relatively carefree life. “That’s part of who I am,” he said. “I don’t really think too much.”

It took about 25 years for Mr. Reveilles to find his calling. In 1992, he left his village in Provence, France, to study English in the United States with a friend. The two kicked around Los Angeles without driver’s licenses, spent a season in Miami working bottle service at a South Beach nightclub and slept in the same bed upon moving to New York in the early 1990s.

Here, he worked as a bartender, waiter, manager and cafe owner. But for fun, he found his way onto the city’s tennis courts. The sport could be expensive, he learned, especially in New York, so he eventually bought a tennis racket stringing machine to save money. He taught himself to cut, crank and clamp, and soon discovered he had a knack for it. In 2018, he left his last restaurant gig and branded himself as the “Traveling Stringer.”

Mr. Reveilles, 52, believes his years in the hospitality industry have helped him. “Those jobs taught me how to serve people, and I believe at the end of the day we are all here to serve each other,” he said. He lives with his wife, Charlotte Nicollon des Abbayes, 44, who waits tables at the French bistro Café Paulette, her son, Morgan Kipping, 17, their daughter, Ella, 7, and their cat, Lili, in Clinton Hill, Brooklyn. 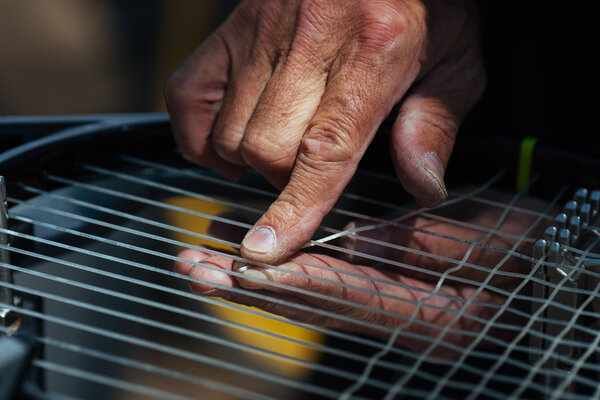 GETTING ACQUAINTED Tennis is not an easy sport to pick up. You need a racket, you need to find a club, you need someone to hit with. My first partner liked to party too much, and it would take forever to wake him up. So one day I got sick of it and went by myself to East River Park and just waited for someone to ask me to play. Then I started to really enjoy it.

JOB TRAINING Sunday is a very busy day for me, but I try to take some time early in the morning to bike. I wake up at 6:30 and go to New Jersey with my friends. We do about 60 miles, which is great training for my business, because I have to bike about 150 miles per week picking up and dropping off the rackets. We go down the West Side Highway to the George Washington Bridge, ultimately stopping at a place in Palisades called 9W Market. It’s a crazy scene full of cyclists. We all catch up and have coffee and chocolate croissants. When we get back to the city, we go to Forma Pasta Factory in Greenpoint for lunch. After that is when I set up my stringing machine, put it on my other bicycle and head to Fort Greene Park.

BAD LUCK New York City’s public courts were closed for three months last year because of Covid, so business was very low. My wife works in the restaurant business, and we didn’t pay rent for six months. But then I made a deal with my landlord. We’ve lived in the same apartment for 10 years and love it here.

BETTER LUCK Luckily, when the courts reopened last July, a lot of the stores like Paragon Sports were still closed. I started getting to the park around noon and I’d stay until around 5. Occasionally I’ll travel with the machine to McCarren Park in Williamsburg and also to the West Side Highway. It’s a lot of work, because I have a simple single-speed bike and the stringer weighs about 70 pounds.

THE ZONE I try to do 10 or maybe 15 rackets a day. Doing 18 in one go — that’s not fun. And I want to keep it fun. In America, work is everything. But you cannot do just work. I know that New York is expensive, but you have to have something else. It’s important to find something that can put you in the zone and forget everything. For me, that’s tennis.

THE TECHNIQUE Stringing a racket seems easy, but it’s not. I’m very handy and I have the quality of when I want something usually I get it, a strong willpower. I learned after watching someone once. I cut the rackets with big scissors and my 7-year-old daughter pulls the strings out. She’s a lot of help. I have a workshop in my building — just next to my apartment — but one of my two machines is in our living room. Soon I’m going to have to find a solution, because my wife doesn’t like that too much.

MIND-SET I feel like tennis is a game that goes really fast, but you need to be at peace mentally. When you’re on a tennis court you have to react fast but keep your mind still. I’m a certified yoga teacher, but I just practice for myself. I’ve also been doing chanting and meditation for about 15 years. My mantra translates to “I bow to my inner self.” But stringing is my meditation right now. You have to concentrate or you’re going to make a mistake.

IDOL I met Roger Federer back in 2005 through a friend. I spent the whole U.S. Open tournament with his wife and his mom. He was staying at the Hotel Pennsylvania and there was an Italian restaurant next to it where we had dinner after he won the semifinal. I don’t remember what he ordered. I was not — how do you say? — touching the ground. He’s an inspiration.

DREAMS Someone like Roger Federer has his own stringer. Tournaments also hire stringers. I don’t want to be on the tour; I want to be with my family. But for the experience? One time? I’d like to be working at the U.S. Open. I’d also love to open a little cafe where people could drop off their rackets and get them restrung.

FAMILY TIME We try to eat dinner early. We like a Mexican place called Taqueria Fort Greene, where we get guacamole and fish tacos. My daughter likes the quesadilla and my stepson gets this salad with steak that’s really good. If I have more rackets to string, I’ll do that until 10:30 or so. My wife and I used to play before my daughter was born. Now it’s harder to find time to do that because I’m doing tennis all the time. With my daughter, I’m trying to get her to play a little bit, but it’s not her favorite sport. I guess there are too many rackets in the apartment all the time for her to be interested.