How a Miami School Became a Beacon for Anti-Vaxxers

MIAMI — A fifth-grade math and science teacher peddled a bogus conspiracy theory on Wednesday to students at Centner Academy, a private school in Miami, warning them that they should not hug parents who had been vaccinated against the coronavirus for more than five seconds because they might be exposed to harmful vaccine shedding.

“Hola Mami,” one student wrote in an email to her parents from school, saying that the teacher was “telling us to stay away from you guys.”

Nearly a week before, the school had threatened teachers’ employment if they got a coronavirus vaccine before the end of the school year.

Alarmed parents frantically texted one another on WhatsApp, trying to find a way to pull their children out at the end of the term.

Inside Centner Academy, however, “hundreds of queries from all over the world” came in for teaching positions, according to the administration. More came from people who wanted to enroll their children at the school, where tuition runs up to $30,000 a year.

The policy barring teachers from contact with students after getting the vaccine brought a flurry of television news crews who parked outside the school for days, prompting teachers to keep children indoors for physical education and recess. Leila Centner, the school’s co-founder, who says she is not against fully tested vaccines, wrote on Instagram that the media are “trying to destroy my reputation because I went against their narrative.”

Devoted supporters cheered her on.

“We won’t let them take you down!” one of them wrote on Instagram. “We stand strong with you! You’re an angel trying to save our kids and teachers.”

Ms. Centner, an avid social media user who has long used her accounts to document her luxurious lifestyle, took effective control of the school last year, in the midst of the pandemic. She told the community that the school, with prekindergarten through eighth grades, would focus on “happiness” and espouse “medical freedom.”

But interviews with 21 current and former parents and teachers, as well as a review of social media posts and of school documents, emails, text messages and videos, show how the wealthy and well-connected Ms. Centner brought her anti-vaccination and anti-masking views into the school’s day-to-day life, turning what had been a tightknit community into one bitterly split between those who support her views on vaccinations and those who do not.

“Every afternoon I have to explain things to my child when she comes home and says, ‘How come the school says what you’re saying is not right?’” said Iris Acosta-Zobel, referring to the importance she gives at home to masking and vaccinations. She pulled her daughter out of the school on Friday.

David J. Centner, a former electronic highway tolling entrepreneur who co-founded the school in its current iteration with his wife, said in written responses to questions that the school was listening to families. “We have met with more than 70 parents, and we are pleased that so many families continue to support our mission and trust us with their children,” he said.

Sara Dagan, who has four children at the school, said she was not troubled by the controversy. “Everything was blown out of proportion,” she said. “I’m comfortable with holding off on the vaccine. My main concern is the happiness of the kids.”

Most people interviewed for this article requested anonymity to protect their children or their employment. Some former parents and teachers said they feared retaliation if they spoke publicly. Others declined to comment because the school had made them sign nondisclosure agreements.

The anti-vaccination policy requires recently vaccinated teachers to maintain a distance from students — Ms. Centner told teachers not to hug the children, for example. It caused such a frenzy that a reporter asked about it during a White House briefing. (The school received $804,375 from the federal Paycheck Protection Program during the pandemic.) Jen Psaki, the press secretary, noted that public health guidelines strongly encourage vaccines against the coronavirus and are meant to keep people safe. 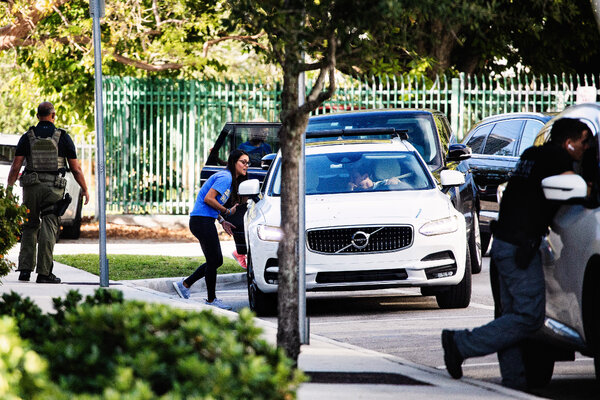 Centner Academy opened in its current form last year, after the Centners, who previously owned just the preschool, took over the Metropolitan International School, an established private school that focused on foreign languages and served an international clientele. Its owner retired and said the school would merge with the preschool owned by the Centners, who have donated heavily in recent years to the Republican Party and former President Donald J. Trump.

By the time the pandemic hit, the school’s old identity and leaders were gone, and the Centners were at the helm.

Things began to change, parents said. Surveillance cameras were installed to record both video and audio, for what Mr. Centner said were security and insurance purposes. Ms. Centner once remarked that children should be kept away from windows, for fear of radiation from 5G cell towers, another baseless conspiracy theory. (The windows at the preschool now have electromagnetic frequency “shielding blockers,” Mr. Centner said in response to a question about the school’s 5G concerns.) The school opposed feeding children sugar and gluten, and required that students have different shoes for indoors and outdoors. Some parents said they thought such ideas odd but inoffensive — unlike what began to happen with the school’s response to the coronavirus.

The school opened for in-person instruction in September and initially pledged to follow Centers for Disease Control and Prevention guidelines, as well as a local mask mandate. But teachers said they found no attempt at social distancing during orientation in August, and Ms. Centner discouraged mask use. Teachers had to sign waivers acknowledging that there was a health risk associated with returning to work in person.

When the Florida Department of Health visited for routine food inspections in August and December, teachers were told to mask up, according to a former teacher and a current teacher, who produced two WhatsApp messages as proof.

Parents were offered forms to exempt their children from any need to wear masks, similar to a school policy that also exempts children from vaccines of all kinds if their parents wish.

Ms. Centner operated a WhatsApp group called “Knowledge Is Key” (joining was optional, Mr. Centner said) on which she shared anti-vaccination material with teachers. When a parent asked if the school would mandate the flu vaccine, Ms. Centner laid out her skepticism about vaccines in a letter to parents. She cited a nonprofit organization started by Robert F. Kennedy Jr., an anti-vaccination crusader.

The latest on how the pandemic is reshaping education.