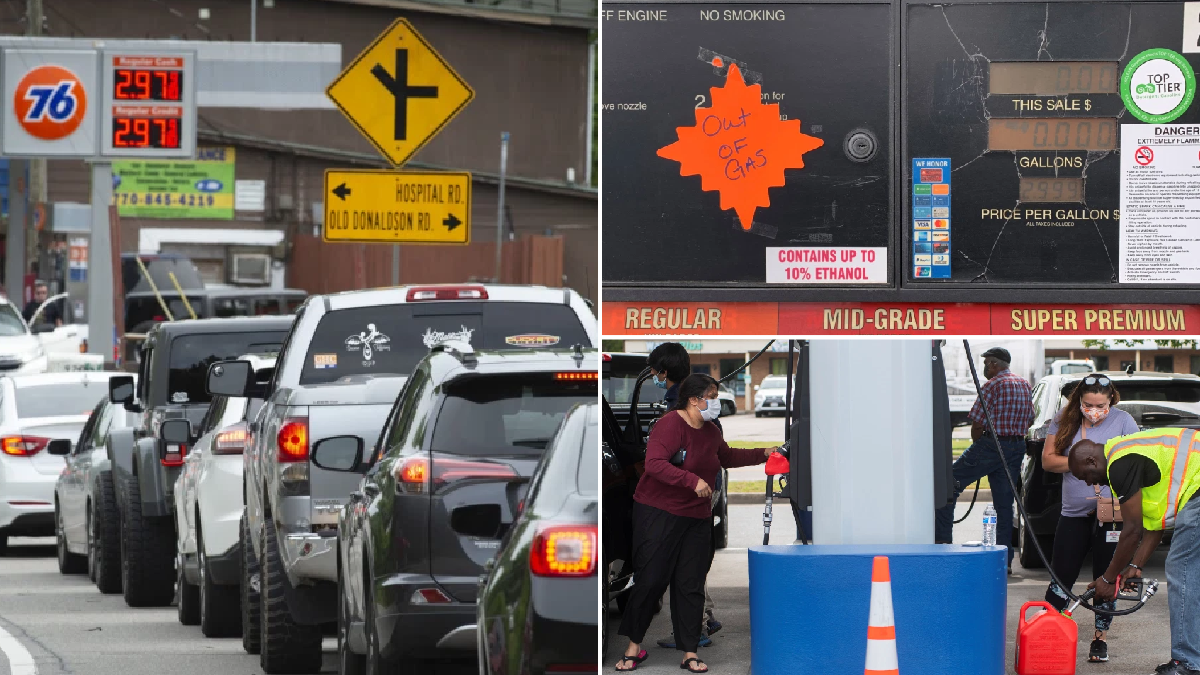 More than 1,000 gas stations across southern America have either ran out of gas or are close running out after a major US fuel pipeline was attacked by Russian hackers.

The governors of Florida, Virginia and Georgia have all declared states of emergency as fuel supplies run dry for millions of Americans.

Many gas stations have been forced to close and people have resorted to panic buying following the ransomware attack on the Colonial Pipeline, on Thursday.

The FBI believe a Russian hacking outfit called DarkSide is responsible for the attack, while president Vladimir Putin denied any involvement yesterday. In taking ownership of the attack, Darkside said their only goal was to ‘make money’ but the gas line’s shutdown has caused chaos for America’s southeast and deep south states. 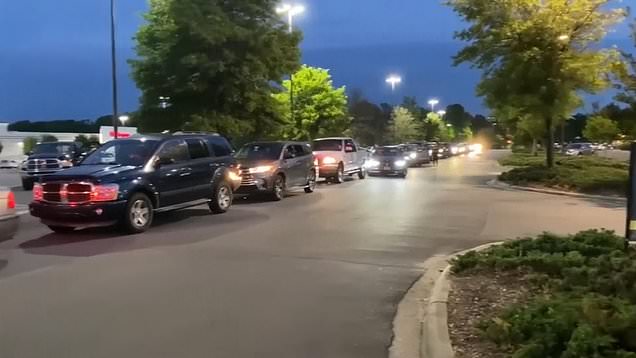 The Southeast is particularly vulnerable to fuel shortages because it has fewer refineries and pipelines to deliver fuel when compared to the Northeast, which is less at risk. Panic buyers in cities like Atlanta, Georgia, formed huge queues at gas stations as many put up signs saying their supplies had run dry.

While Colonial bosses have started bringing services back on line, the company – which provides almost half of all fuel to America’s east coast – warns that full service may not be resumed until the end of the week.

The worst shortages are in North Carolina, where 10% of all stations in the state have ran out of fuel, according to Gas Buddy Tracker. Virginia was second hardest-hit, with 7.9% of gas stations empty, followed by Georgia with 6.5% of tanks dry and South Carolina with 4.3%.

In five states of the worst hit states, Georgia, Florida, South Carolina, North Carolina and Virginia, demand was up by a collective 40.1 per cent on Monday as panic buyers scramble to stockpile their own personal supplies of gas.

The states of emergency provide more flexibility to officials who are tasked with dealing with the crisis, and increases funding for state and local governments to make sure they have enough fuel to go around.

In issuing an executive order yesterday, DeSantis said: ‘the disruption of Colonial Pipeline operations poses a significant and immediate threat to the continued delivery of such fuel products to the State of Florida.’

Florida’s gasoline supplies haven’t been hit as bad as other states by the outage, but panic buying has caused local shortages.

Virginia’s governor, Northam, said: ‘This emergency declaration will help the Commonwealth prepare for any potential supply shortages and ensure Virginia motorists have access to fuel as we respond to this evolving situation.’

Kemp signed an executive order to temporarily suspend the gas tax in Georgia in light of the Colonial Pipeline cyber attack.

The Colonial Pipeline was forced to close from Friday until Monday following the attack last Thursday.

The US Environmental Protection Agency (EPA) issued a temporary fuel transportation waiver to increase the gas supplies to key areas.

Tankers continue to transport fuel by road from Texas to areas such as Georgia, Florida, North Carolina and Virginia, where supplies are worst hit. The shutdown has caused gas prices to spike to a seven-year high.

In a statement confirming their role in the attack, DarkSide, a Russian hacking outfit made up of ransomware veterans, said: ‘

‘We are apolitical, we do not participate in geopolitics,’ the statement read. ‘Our goal is to make money and not creating problems for society.’

‘From today we introduce moderation and check each company that our partners want to encrypt to avoid social consequences in the future.’

‘We categorically do not accept any accusations against us.’

Colonial, which is based in Atlanta, Georgia, hasn’t said whether it has already paid or is negotiating a ransom payout with the hackers.

The pipeline is the largest in US and is responsible for transporting more than 100 million gallons of fuel – 2.5 million barrels – daily through pipelines laid out between Texas and New Jersey.