In the weeks since Adam Newbold, a former member of the Navy SEALs, was identified as part of the enraged crowd that descended on the Capitol on Jan. 6, he has been interviewed by the F.B.I. and has resigned under pressure from jobs as a mentor and as a volunteer wrestling coach. He expects his business to lose major customers over his actions.

But none of it has shaken his belief, against all evidence, that the presidential election was stolen and that people like him were right to rise up.

It is surprising because Mr. Newbold’s background would seem to armor him better than most against the lure of baseless conspiracy theories. In the Navy, he was trained as an expert in sorting information from disinformation, a clandestine commando who spent years working in intelligence paired with the C.I.A., and he once mocked the idea of shadowy antidemocratic plots as “tinfoil hat” thinking.

Even so, like thousands of others who surged to Washington this month to support President Donald J. Trump, Mr. Newbold bought into the fabricated theory that the election was rigged by a shadowy cabal of liberal power brokers who had pushed the nation to the precipice of civil war. No one could persuade him otherwise.

Photos from the Capitol show Mr. Newbold wearing a black “We the People” T-shirt and straddling a Capitol Police motorcycle, just a few steps from where officers were battling with rioters.

Mr. Newbold says he did not enter the Capitol, and he has not been charged with any crimes. But his presence there reflects the volatile brew of partisan politics and viral misinformation that helped lead to the assault.

Mr. Newbold’s worldview is plain from his Facebook account. In a combative video laden with expletives that he posted a week before the riot, he repeated debunked but widely circulated claims about the election, saying that “it is absolutely unbelievable, the mountains of evidence of election fraud and voter fraud and machines and people who voted, dead people who voted.” When commenters challenged him, he responded with expletives and rejoinders like “Yeah keep laughing, you’re going to be laughing when you’re stomped down.”

One striking aspect of the angry crowd at the Capitol was how many of its members seemed to come not from the fringes of American society but from white picket-fence Main Street backgrounds — firefighters and real estate agents, a marketing executive and a Town Council member, all captivated by flimsy conspiracy theories. Mr. Newbold’s presence showed just how persuasive the rigged-election story had grown.

His experience ought to have made him hard to fool. A few years earlier, he had been on the receiving end of the same kind of baseless and potentially dangerous fervor about a supposed sinister government plot that became known as Jade Helm.

Even after the Capitol riot, though, he expressed certainty that he had not been fooled.

“I’ve been to countries all over the world that are indoctrinated by propaganda,” Mr. Newbold said in a long telephone interview last week, adding that he knew how misinformation could be used to manipulate the masses. “I have no doubts; I’m convinced that the election was not free and fair.”

He said he believed that unnamed elites had quietly pulled off a coup by manipulating election software, and warned that the country was still on the precipice of war. 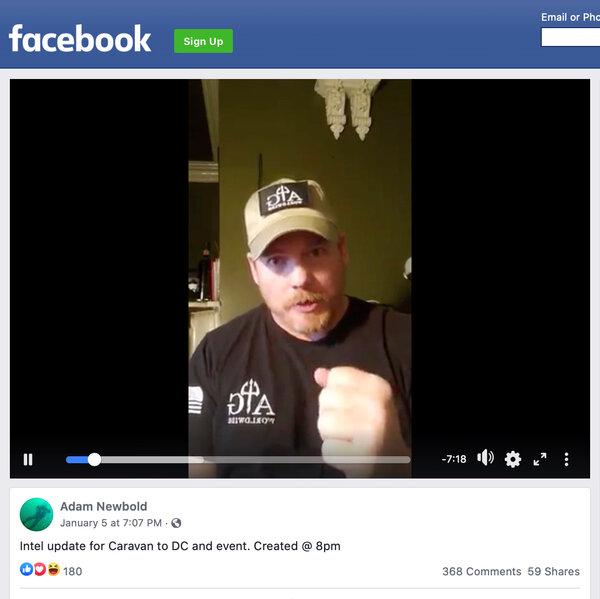 Mr. Newbold, 45, lives in the rural hills of eastern Ohio, and is one of three brothers who all became Navy SEAL commandos. He spent 23 years in the elite force, Navy records show, including seven in the Naval Reserves, before retiring as a senior chief petty officer in 2017. He was given two Navy Commendation medals for valor in combat deployments, and several others for good conduct.

A former SEAL who served with him at Joint Expeditionary Base Little Creek in Virginia said Mr. Newbold was smart and had a good reputation in the SEAL teams, and had worked with the C.I.A. on intelligence gathering.

After the Navy, Mr. Newbold moved to the small town of Lisbon, Ohio, opened a coffee shop and started a company called Advanced Training Group that taught SEAL-style tactics to members of the military and the police, and maintained a gym and shooting club for locals.

Through his company, he got involved in helping to design and conduct an eight-week military exercise in Texas and other border states in the summer of 2015 that was called Jade Helm 15.

When a PowerPoint slide summarizing the exercise was leaked, it was seized upon by fringe Facebook groups and professional conspiracy-theory promoters like Alex Jones, who began claiming that Jade Helm was a covert plot to have federal troops invade Texas, seize citizens’ guns and impose martial law. Baseless rumors circulated about “black helicopters” and Walmart stores that had supposedly been turned into detention camps.

The storm of political paranoia whipped up over a straightforward military exercise became so fierce that some members of Congress, who later questioned the election of Joseph R. Biden Jr., began demanding answers, and Gov. Greg Abbott directed the Texas National Guard to keep watch.

In the end, the exercise went off without a hitch. Mr. Newbold said in the interview that he and the other former special operators who planned the training exercise laughed at the paranoia, and even made T-shirts saying “I went to Jade Helm and all I got was this tinfoil hat.”

Last week, he acknowledged that the frenzy of misinformation surrounding Jade Helm could have been lethal. Local residents in Texas had been scared to the edge of violence. Three men were arrested after planning to attack the exercise with pipe bombs.

“There were actually some farmers and landowners who were making threats that if anyone was on their land, they would shoot them, so there were real concerns,” Mr. Newbold said. “It’s funny, but it’s stuff we have to take seriously.”

From Riot to Impeachment

The riot inside the U.S. Capitol on Wednesday, Jan. 6, followed a rally at which President Trump made an inflammatory speech to his supporters, questioning the results of the election. Here’s a look at what happened and the ongoing fallout: