A former senior adviser in the Obama administration was arrested Tuesday on charges that he stole more than $200,000 from a network of charter schools that he founded and used the money to get a lower interest rate on a mortgage for a Manhattan apartment, federal prosecutors said.

The founder, Seth Andrew, 42, is accused of taking money from bank accounts controlled by Democracy Prep Public Schools, which teaches mostly low-income students of color in New York and other states, and used it for the purchase of a $2 million apartment, prosecutors said.

Mr. Andrew is charged with one count each of wire fraud, money laundering and making a false statement to a bank. The first two charges both carry a maximum sentence of 20 years in prison, and the third carries a maximum sentence of 30 years in prison, according to a statement on Tuesday from Audrey Strauss, the U.S. attorney for the Southern District of New York, and William F. Sweeney Jr., the assistant director-in-charge of the New York field office of the Federal Bureau of Investigation.

“Today Andrew himself is learning one of life’s most basic lessons — what doesn’t belong to you is not yours for the taking,” Mr. Sweeney said in the statement.

Mr. Andrew pleaded not guilty and was released on bail, according to court records and his lawyer, Michael Lloyd Yaeger. “We’re currently reviewing the papers that were just unsealed this morning,” he said.

Natasha Trivers, the chief executive of Democracy Prep Public Schools, said that although the organization was not materially affected by the crimes Mr. Andrew was accused of, it was a stark departure from their values.

“His alleged actions are a profound betrayal of all that we stand for and to you and your children, the scholars and families that we serve,” Ms. Trivers wrote to students’ parents on Tuesday. 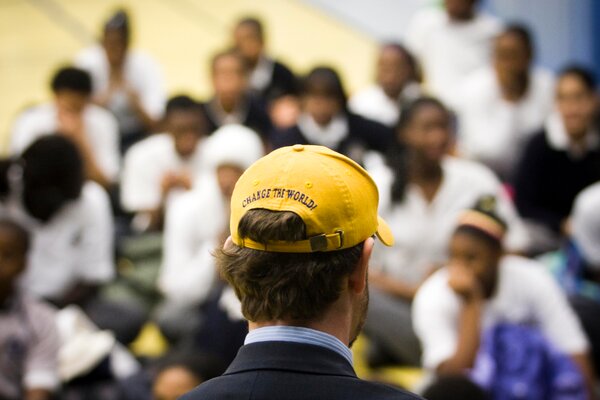 Mr. Andrew was a young and ambitious educator when he founded Democracy Prep in 2005. He had briefly taught in South Korea and “saw a different model of education” there, he said in a 2017 interview with an education news site, The 74. That model “had taken an entire nation of 50 million people from poverty to prosperity,” and “they used education at the core. And they did it differently than America,” he said.

According to the network’s website, “Seth Andrew founded Democracy Prep in 2005 to ensure that every single student will work hard, go to college, and change the world!” The phrase “Change the world!” is on the back of the yellow baseball cap that Mr. Andrew made part of his signature look.

The network’s first school opened in Harlem in 2006. It eventually expanded to 23 schools, in the Bronx; Camden, N.J.; San Antonio; and Las Vegas. Of the network’s 7,000 students, nearly all are students of color and 85 percent qualify for free lunch, according to the network’s website.

Under an agreement with the New York State Board of Regents, the charter network was required to “maintain an ‘escrow account’ that may be accessed only if the school dissolves,” prosecutors said. Mr. Andrew was a signatory to those accounts and had access to them, they said. The money in the accounts totaled a little more than $218,000.

Propelled by the network’s success, Mr. Andrew landed a job in 2013 in the United States Department of Education and later became a senior adviser in the Office of Educational Technology at the White House under President Barack Obama. In the administration, Mr. Andrew helped promote and improve STEM education, a curriculum focused on science, technology, engineering and mathematics.

The new bank was not chosen at random: It offered customers a reduced interest rate on their mortgage “for every $250,000 on deposit, up to a total of $1 million,” prosecutors said. Using the $142,000 from the charter schools enabled Mr. Andrew to receive a reduction in the interest rate of 0.5 percentage points, they said.

In late August, Mr. Andrew and his wife, who was not charged, purchased a Manhattan apartment for $2,368,000; they got a mortgage from that second bank for $1,776,000 with an interest rate of 2.5 percent, according to prosecutors.

In October 2019, Mr. Andrew closed the third escrow account and received a check for more than $75,000, prosecutors said. He took that money and opened a new account at a third bank, they said.

Later, Mr. Andrew withdrew more than $144,000 from the second bank and deposited that money into the newest account, bringing funds from all three escrow accounts together, according to prosecutors. He then put that money into a certificate of deposit, which matured on May 20, 2020, earning him more than $2,000, prosecutors said. He then took funds that had originated at Democracy Prep and put them into a new civic organization that he controls, they said.

Ms. Trivers, who took over leadership of Democracy Prep in 2019, said in her letter to parents, “Upon learning of the unauthorized withdrawals, Democracy Prep alerted the appropriate authorities.

“As the victim of this crime,” she wrote, “Democracy Prep has continued to assist the authorities as they investigate and prosecute this crime to the full extent of the law.”