‘Firefighters Out There in the Snow’: Wildfires Rage Early in Parched West

RUIDOSO, N.M. — New Mexico’s first major wildfire of the year ignited this week near a campground where visitors can hike to view hundreds of prehistoric petroglyphs. After scorching nearly 6,000 acres in a matter of days, the blaze remains only 13 percent contained.

In the Hualapai Mountains in Arizona, officials ordered the evacuation this week of 200 homes as screeching winds propelled flames through forests of brittle-dry pines. And in California, a fire threatened a Los Angeles County sheriff’s facility storing weapons and ammunition, in a region where the winter snowpack has been reduced to a tiny fraction of its usual size.

“Another fire, so early in the spring, spreading so fast — it’s hard to fathom,” said Pamela Witte, who nervously watched this week as smoke filled the skies near her home in the mountain town of Ruidoso, N.M.

A severe multiyear drought that could be among the worst in centuries, deepened by a dearth of monsoon rains in 2020 and disappointing snowfall over the winter, has helped spark major wildfires months earlier than usual, leading to concerns that large swaths of the American Southwest could face a harsh burning season.

“We’re looking at widespread fire activity this year, and by widespread, I mean statewide,” said Tiffany Davila with the Arizona Department of Forestry and Fire Management. Twelve times as much land in Arizona has burned during the first four months of the year as in the same period in 2020.

Climate change has altered precipitation patterns across the Southwest, drying out soil and vegetation, intensifying wildfire seasons and threatening water supplies for people and agriculture. Although 2019 was a relatively wet year, last year was dry and hot, and research indicates that global warming increases the odds of more of the same.

“The risks have just been increasing year to year,” Wendy Mason, a New Mexico wildfire prevention official, said. “This year’s drought in the state is quite possibly the worst since records have been kept.” 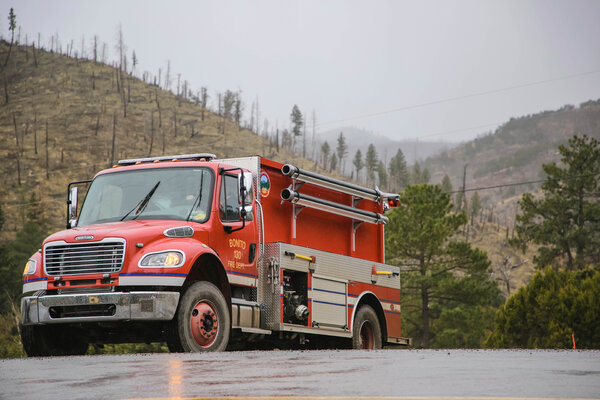 And there is a new factor in the mix: As the coronavirus pandemic drags on, more travelers are venturing into the outdoors — 15 national parks set visitation records in 2020 — raising fears that people unfamiliar with fire safety could start even more blazes. Already, humans cause more than 80 percent of the wildfires in the United States.

Investigators are still trying to determine the cause of the blaze that started near the campground in the Lincoln National Forest on Monday and spread quickly to the boundaries of a ski resort owned by the Mescalero Apache Tribe. Despite rain and light snowfall this week, the Three Rivers Fire, as it is known, continued to burn on Friday — a grim forewarning of what may lie ahead in drought-stricken southern New Mexico.

“It’s scary when you can see the smoke rising over the mountains,” said Anthony Torres, a pastor from a church in Alamogordo who organized a relief effort, feeding brisket and other hot meals to fire crews and evacuees. “People are understandably afraid.”

Parts of the towns of Ruidoso and Capitan, N.M., took on the feel of a staging area for a disaster zone as firefighting crews from around the country descended to coordinate efforts aimed at controlling the blaze.

Based at Ruidoso’s convention center, they fanned into the surrounding forest to build fire lines that could protect the Mescalero Apache Reservation, and made plans to protect neighborhoods in case the fire surges or changes direction. No lives had been lost or structures burned by Friday afternoon.

In Mohave County, Ariz., about 50 miles from the California border, the Flag Fire forced the evacuation of about 200 homes this week as it consumed nearly 1,300 acres of the pine-covered Hualapai Mountains. The blaze was 34 percent contained by Friday afternoon.

Arizona has already had 311 fires this year, compared with 127 through the first four months of 2020, Ms. Davila with the forestry department said; 15,555 acres have burned, compared with 1,290 acres in the same period last year.

“We don’t normally see a lot of fire activity in Mohave County until May or June,” she said. “We’re pretty much in extreme drought across nearly the entire state.”

Poor forest management, allowing a buildup of grasses, shrubs, fallen branches and small trees that can serve as fuel for wildfires, has also contributed to the intensifying fire season. Some of the fires raging in the West are threatening places that were hit by colossal blazes just a few years ago.

Windstorms in California unleashed dozens of wildfires across the state in the usually calm month of January. Some burned in the same areas devastated months earlier by one of the state’s largest blazes on record, the C.Z.U. Lightning Complex, which was nurtured in part by California’s exceptionally dry conditions in 2020.

“It also set the all-time records for hottest summer,” said Jeffrey Mount, a senior fellow with the Public Policy Institute of California’s Water Policy Center, adding, “It was a scorcher.”

The fire that threatened the Los Angeles County sheriff’s weapons and ammunition this week burned 650 acres, triggering mandatory evacuations and road closures before crews managed to control much of the blaze. Depleted reservoirs and snowpack levels that are a small fraction of normal for this time of year are heightening fears about California’s wildfire risks.

“We have been using groundwater unsustainably for more than a century,” Mr. Mount said. “That’s had a cascade of unintended and unwanted consequences: community wells drying up, land subsidence of many feet, the drying up of springs and wetlands.”

Some of the changes needed to reduce the wildfire threat are relatively small in scale, experts say, such as encouraging homeowners to remove pine needles from their roofs and gutters or removing vegetation growing too close to their homes.

Such moves could curb the destructiveness of disasters like the Camp Fire, whose flames quickly engulfed homes in the town of Paradise, Calif., that were built in heavily wooded areas. That wildfire, one of the deadliest in the United States, left at least 85 people dead in 2018, including people whose charred remains were found in vehicles stalled in frenzied attempts to flee.

In a pivot from firefighting policies that sought to extinguish fires whenever they appear, wildfire experts are also urging authorities to more aggressively thin forests and carry out controlled burns to clear out the vegetation that can fuel massive blazes.

Still, such efforts remain small compared with the scale of the wildfires afflicting much of the West, including those in the past weeks. The Three Rivers Fire still burning in New Mexico is “particularly complex,” said Laura Rabon, a spokeswoman for the Lincoln National Forest.

After it spread to remote forested areas, crews had to scale hillsides, fighting the blaze from granite escarpments. Then the snow started to fall, as if reminding those on the ground that it was early in the year to be battling such a large wildfire.