And although he’s not on the ballot, his rally in Chattanooga, Tennessee, felt almost exactly like one of his 2016 campaign events.

Same music, same T-shirts being thrown into the crowd, same dire warnings about the existential crisis that will occur if the Democrats win.

It was vintage Donald Trump.

:: Collective rage of women could tip the balance in the US midterms 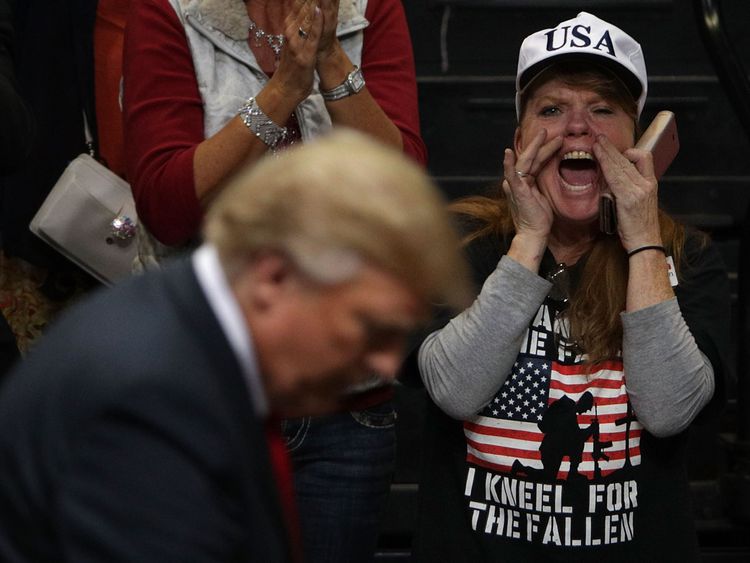 The president has framed the midterms as a referendum on his last two years in office, seeking an endorsement of his vision for the US, perhaps with an eye on his own election in two year’s time.

And what he pushed in Chattanooga went down fantastically well with the crowd; a booming economy, the confirmation of two Supreme Court justices, business deregulation, tax cuts, and a tough stance on illegal immigration.

It was as fiery as I’ve seen Mr Trump at one of these things – his speech laced with patriotic fervour, the crowd packed to the rafters, and it hit home.

The senate race in Tennessee is way to close for comfort, and it just might be because of the president.

It is resonating with moderate voters fed up of the bitter partisan divide in this country.

Even a narrow victory for Mrs Blackburn would be a shock in a deep red state that Trump carried by 26 points two years ago.

Some in the rally crowd suggested to me that the president’s heated rhetoric over immigration and what one called his “lack of grace” after the shooting in Pittsburgh is hard to stomach in a part of the US known for its manners and civility.

It is always difficult for presidents to convert their national star power to local victories in the midterms.

Just look at what happened to Barack Obama in 2010.

In his own words, his party got a “shellacking” at the polls.

So whatever plans Donald Trump has for spinning things or avoiding blame if the Republicans get the same treatment, he is taking a huge political gamble tying his image so closely to his party’s fortunes.