Mayor Bill de Blasio apologized on Thursday to the families of the eight people killed in a terror attack on the Hudson River bike path in Manhattan, admitting that his office botched a memorial ceremony held a day earlier to mark the one-year anniversary.

He said that the ceremony — for the victims of last year’s Halloween attack, in which the driver mowed down pedestrians and cyclists — was organized by City Hall at the 11th hour. They waited even longer to invite the families of the victims.

Then they forgot to include a reading of the victims’ names in the program, causing the mayor to awkwardly return to the podium to apologize for the omission.

He then read the names, mispronouncing some of them, and asked for a moment of silence before adjourning the gathering a second time.

“The problem was the event was put together way too late,” Mr. de Blasio said at his weekly news conference. “It was not planned way out. I think the idea really emanated from what happened the week before, because it focused everyone’s attention on the fact we went through another type of attack.”

Mr. de Blasio appeared to be referring to the delivery a week ago of pipe bombs to the Manhattan offices of CNN and the actor Robert De Niro, as well as to prominent Democrats and critics of President Trump around the country; and the shooting in the Tree of Life synagogue in Pittsburgh, in which 11 Jewish worshipers were killed.

Mr. de Blasio’s press secretary, Eric F. Phillips, said that preparation for the memorial began on Sunday, adding that the families were not invited until Tuesday, the day before the event. He would not say which mayoral office or aide handled the preparation.

“I didn’t have anything to do with the details to put together the event, but I still have to take responsibility as mayor,” Mr. de Blasio said on Thursday. “It wasn’t handled right and I apologize to the families.”

[Here are 10 of our best reads from our New York campaign coverage.]

It was the second time that Mr. de Blasio has tripped in a significant way over his attendance at a memorial ceremony, the type of occasion that should be rote for New York City mayors.

In November 2014, during his first year in office, Mr. de Blasio arrived late to a memorial service in Queens for the 265 people killed in the crash of American Airlines Flight 587. 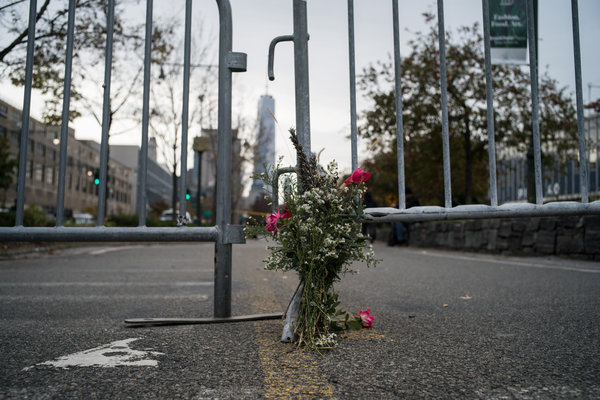 His tardiness on that occasion was acutely apparent because the ceremony involved the ringing of a bell at 9:16 a.m., the time of the crash. Mr. de Blasio arrived just after 9:20 a.m. and missed the bell-ringing.

He said at the time that he arrived late because he had a “very rough night” the night before, and because fog had slowed the police boat that took him to the waterside ceremony.

The victims of the bike path attack included Darren Drake, 32, of New Jersey; Nicholas Francis Cleves, 24, of Manhattan; five men visiting from Argentina and a woman visiting from Belgium. It was not clear if the families of the foreign victims were notified. Mr. Phillips said that the consuls general of Argentina and Belgium attended the event.

The memorial ceremony, which was held in Lower Manhattan, near the bike path, went off poorly. Mr. de Blasio spoke, praising the police who shot and apprehended the driver involved in the attack. The driver, Sayfullo Saipov, is awaiting trial on terrorism charges; federal prosecutors have said they intend to seek the death penalty.

The mayor said that he did not have the victims’ names when he first spoke at the ceremony. “Of course I would have read them,” he said. “I didn’t know if someone else in the program was going to read them. I just didn’t have those details and then someone in the audience said, ‘You should do that.’ And we did.”

He added, “I’m not happy about it. It wasn’t right. But the intention was to try and honor those folks.”

After the event, he greeted some of the friends and family of the victims. The New York Post reported that one man, Hugh Hales-Tooke, refused to shake Mr. de Blasio’s hand or speak with the mayor because he was angry over how the event was carried out.

Mr. Hales-Tooke was quoted in The Post saying that he was a friend of Mr. Cleves’s family. He said that Mr. Cleves’s mother was out of town and learned of the event too late to attend.

Barbara Drake, the mother of Darren Drake, said in a telephone interview on Thursday that she learned about the memorial ceremony the day before it occurred and did not attend.

“I would never go down there to the crime scene,” Ms. Drake said. She said that she went to church and visited her son’s grave.