Coronavirus: US Bars shut their doors as cases rise and hospitals fill up in the Sunshine State surge

US coronavirus cases have surged in a handful of southern and western states that came out of lockdown earlier, forcing them to shut down again.

The number of US COVID-19 cases rose by more than 40,000 on Monday for the fourth time in five days, according to a tally by the Reuters news agency.

As the country heads towards its Fourth of July celebrations, states from the Pacific to the Atlantic are reintroducing restrictions to try to combat the surge in cases.

The day after the bars re-opened in Los Angeles, more than half a million people hit the town.

Nine days later those bars are closed again as a spike in coronavirus cases has sent public health officials into a panic.

The numbers heading for a night out when lockdown was lifted were not far off the average of 700,000 for a normal pre-pandemic night in LA. 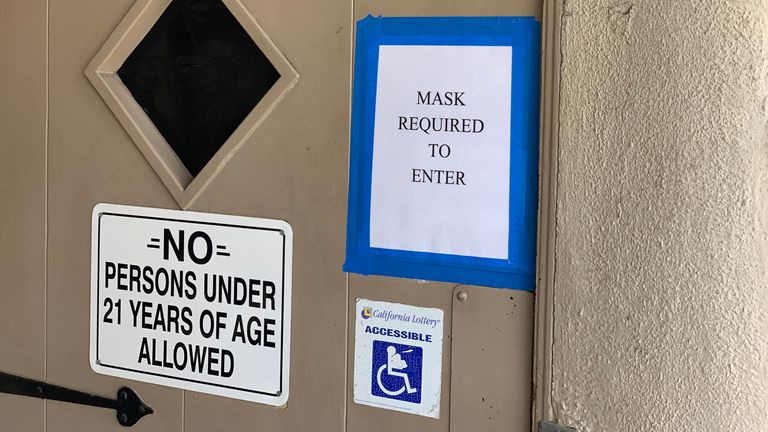 In other words, it was clear there was an urgency to get back to partying in Los Angeles and, equally, that it may have come at an enormous cost.

And the story of LA’s bars is emblematic of a broader situation which, according to officials, is deteriorating rapidly.

Cases are rising, hospitals are filling up.

The director of public health of Los Angeles, Barbara Ferrer, said they always expected there would be some increase in cases as things started to re-open but that “we did not expect the increases to be this steep this quickly”.

Still, some were trying to sneak a cheeky afternoon sharpener. There was disappointment though for the man trying the door of the Snug Harbour – which proudly boasts it opens at 6am – but is now closed.

“My usual place isn’t open so I thought I’d give it a try,” he said: “Better keep looking.”

Bars that also serve dine-in food are allowed to stay open for now, although one enterprising establishment which struck a deal with the takeaway pizza parlour across the car park has also now accepted the spirit of the rules and closed.

The blame for the surge in cases, in California and across the country, is being laid at the door of the under-40s for not taking the risks of the virus seriously enough.

But many in that age group are also most likely to be working in bars, restaurants and shops and consequently more exposed to members of the public taking advantage of the re-opening.

What is most sobering of all in California is that this was the state that seemed to have got most things right in the initial response to the virus.

The stay-at-home orders came quickly. A state that saw some of the first cases in the US put the lockdowns in place early. It appeared to have prevented the sort of infection rate seen in New York.

But, like Florida, Texas and Arizona, California is seeing an explosion of the virus through America’s sunbelt.

And the worry for many is that the 4 July holiday looms large this week – and that America’s traditional party weekend could this year bring a further COVID-19 catastrophe.

I’m in another epicentre, Florida – in the middle of what they’re calling the Sunshine State Surge.

When we arrived over the weekend, it was busy bars, chinking glasses and happy sunseekers you could hear, not sirens. And this time it’s the young, not the old, that are the focus of attention. They account for a disturbing number of new cases. There are now more than 145,000 in Florida – 5,000 alone today.

Many testing positive are aged between 25 and 35 years-old. They may be suffering less, but they’re helping to spread the virus to the more vulnerable.

Governor Ron De Santis, criticised for re-opening the state too soon, is rushing to put in place restrictions and close things up again. And it’s immediately clear how deep the crisis has become in just a matter of weeks since the bars and restaurants opened their doors and the beaches were re-opened.

By 10am, we see an incredibly long snaking line of cars waiting for a test at the Miami Convention Center in the searing heat. All these months into the pandemic, it is very alarming to see how long it’s still taking for some people to get seen.

One woman in the queue tells me impatience is what got them here. She says: “People were waiting to get outside and when everyone got the chance, they rushed out and didn’t protect themselves.” 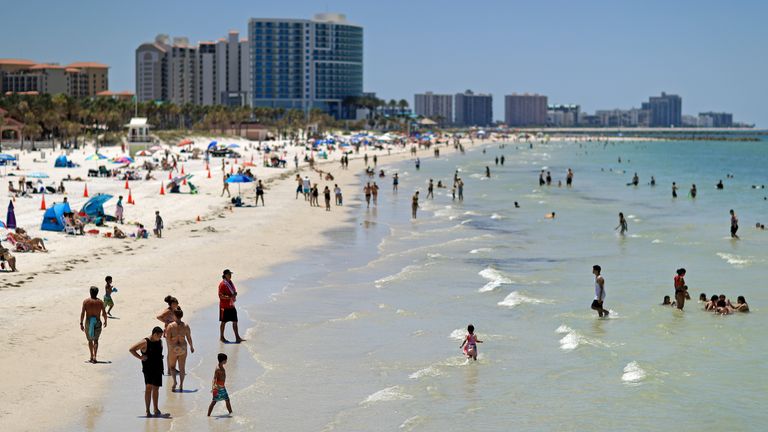 Her friend says the authorities just haven’t been clear enough: “You get messages from the government saying wear masks, then local government say you don’t need to. I think it should be straight across the board that everyone should be required to wear one because we’ll keep having these surges.”

Across the city, at Marlins Park, the home of the Miami Marlins baseball team, the lines look even longer and this time there are two, one for people getting tests, the other for people looking for a free meal from the food bank.

After months of struggle and promises from the president that a recovery was afoot, it’s clear the crisis is still crippling peoples’ health and finances in this state.

America isn’t out the woods – here, it doesn’t even look like it’s on the right path.