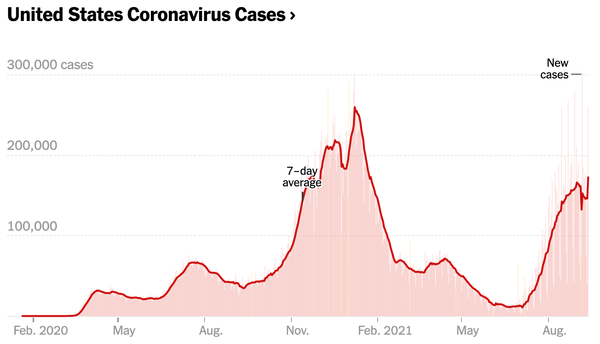 Cuba will begin giving shots to children as young as 2.

Vladimir Putin is in isolation after possible exposure to the coronavirus.

Major religious traditions, denominations and institutions are nearly unanimous in their support of Covid-19 vaccines. Nevertheless, many Americans say they are hesitant to get vaccinated for religious reasons.

Their attempts to secure exemptions from the country’s rapidly expanding vaccine mandates are creating new fault lines, pitting religious liberty concerns against the priority of maintaining a safe environment at work and elsewhere.

“It would be a stretch to say that resistance to the vaccine flows from any particular reading of the Bible,” said our colleague Ruth Graham, who covers religion and faith for The Times. “My sense is that it’s sometimes back-engineered to fit an existing gut reaction to pandemic precautions — and vaccinations specifically.”

Some vaccine-resistant workers are sharing tips online for requesting exemptions on religious grounds; others are submitting letters from far-flung religious authorities who have advertised their willingness to help. In California, a megachurch pastor is offering a letter to anyone who checks a box confirming the person is a “practicing Evangelical that adheres to the religious and moral principles outlined in the Holy Bible.”

For many skeptics, resistance tends to be based not on formal teachings from an established faith leader, but on an ad hoc blend of online conspiracies and misinformation, conservative media and conversations with like-minded friends and family members.

“A lot of Protestant pastors are acutely aware that they are not necessarily the primary shapers of how people are viewing the pandemic,” Ruth said. “It’s almost a cliché now to hear pastors say: ‘I get them for one hour a week and Fox News gets them for 15.’”

President Biden’s sweeping new workplace vaccine mandates have only intensified conflicts. Now, employers are trying to distinguish between primarily political objections from people who may happen to be religious, and objections that are actually religious at their core.

Since federal civil rights laws protect accommodations for religious beliefs that are “sincerely held,” employers are tasked with reviewing a deluge of requests. The city of Tucson, Ariz., for example, assigned four administrators to sift through nearly 300 requests from city workers looking to sidestep a vaccine mandate. So far, they have approved about half.

Some businesses are taking a harder line. United Airlines told workers that those who receive religious exemptions would be placed on unpaid leave at least until new Covid safety and testing procedures are in place.

Some of Broadway’s biggest and best shows — including “The Lion King,” “Wicked,” “Hamilton” and “Chicago” — are resuming performances tonight.

Their return is a powerfully symbolic move for New York City’s recovery, but it’s also a high-stakes gamble at an uncertain stage of the pandemic.

Our colleague Michael Paulson, who covers theater, and the photographer Mark Sommerfeld got a backstage look at the preparations for opening night. Dancers relearned moves, singers flexed their vocal cords, and technicians recreated special effects.

By the end of the year, if all goes as planned, 39 Broadway shows will welcome back audiences, who must be vaccinated and masked. But a big unknown remains: After the Delta surge and months of anxiety and streaming entertainment, is there an appetite for live performances?

Understand Vaccine and Mask Mandates in the U.S.